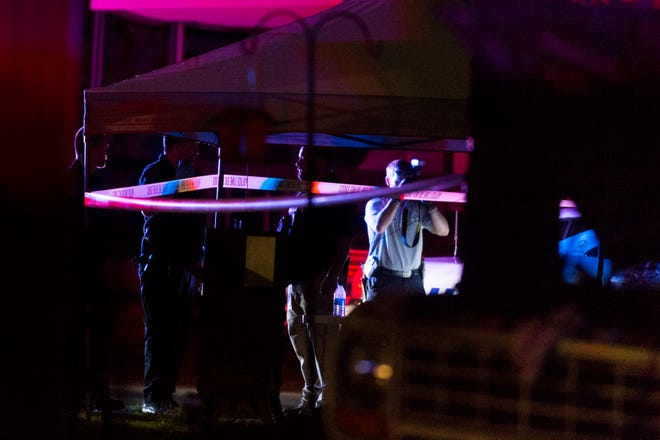 EVANSVILLE, Ind. — A recent initiative to reduce homicides and other violent crime through a partnership with the National Network for Safe Communities is in its early stages here.

“The first stage is to understand in as close to real time as we can what actually is happening in Evansville, and then structuring the rest of the intervention based on those facts on the ground,” Aviles said.

In the past, the fact-finding stage involved a team visiting the city, but an in-person visit to Evansville will hinge on the status of the ongoing COVID-19 pandemic, Aviles said.

The NNSC approach is based on what is found to be the case in most cities experiencing a rash of violent crime: The majority of violent crime in a city is “profoundly concentrated” geographically, demographically and socially, Aviles said.

Aviles said the NNSC avoids using the word “gang” because of its legal, political and racial connotations. She referred to social “clusters” or high-risk groups as the ones who are committing the majority of violent crime in cities.

These groups are at the core of the NNSC’s approach.

During the analysis stage, a team will do a “deep dive” into Evansville and the problems it is facing. Part of that is determining who these groups are, their members, what they are doing and other groups they may clash with.

The team uses each city’s unique circumstances and facts to formulate a plan to open lines of communication with the people at highest risk and offering those groups resources to help them escape cycles of violence.

“What GVI does is put that partnership in direct communication with the highest-risk groups and networks to allow them to say directly as a partnership, ‘The violence has to stop,'” she said. “‘We in the city cannot live like this, it’s killing us. We need you and your friends alive and safe and in our community. We can’t keep losing you to death or prison. But what you’re doing is killing us and it has to stop. And we as a community will offer you any help that we can think of that will be meaningful to you.'”

Group violence intervention “works in part because it occupies common ground between parties that don’t always feel like there’s a ton of common ground,” Aviles said. The NNSC brings law enforcement, community members and organizations, and the offending groups to the table.

“And then it’s following through on those commitments and and helping people who want help and creating special consequences for groups when groups continue to shoot and kill people,” Aviles said.

“The police, we can’t solve all these problems,” he said. “We can go out here and lock people up, but that’s not solving these problems.”

Bolin believes the NNSC’s approach can work in Evansville because it has worked in other communities.

“We’ve been trying to arrest our way out of it for years, and it’s not working,” Bolin said.

Congregations Acting for Justice and Empowerment, a coalition of faith-based organizations, was the first Evansville organization to reach out to the NNSC.

“I mean, we know what the problem is; the problem is gun violence,” DeVries said. “And so far the police department is affirming what the NNSC says is the standard problem in all communities: It’s a small group of at risk people that are perpetuating most of the violence.”

She said the NNSC’s approach is “proven strategy” to reducing violence.

Community activist Rev. William Payne questioned the city’s decision to bring in an outside group to address Evansville’s problems. He said local organizations working in the community would have appreciated more support from the city in the past.

Questions surrounding the partnership’s implications for 2nd Amendment rights arose following news of the contract’s approval, but Aviles said the NNSC approach has nothing to do with the 2nd Amendment.

“There is nothing that the NNSC does that will impact anyone’s 2nd Amendment rights,” DeVries said. “It’s not getting weapons or guns out of the hands of law-abiding citizens who have the right to bear arms.”

“That’s not the goal at all,” Bolin said.

Bolin said he is willing to be a part of the NNSC’s process and hopes their approach helps cut down on violent crime in Evansville.

“We’re always going to arrest the bad guys,” Bolin said. “But we also got to look at how do we prevent some of these people from becoming the bad guys?”