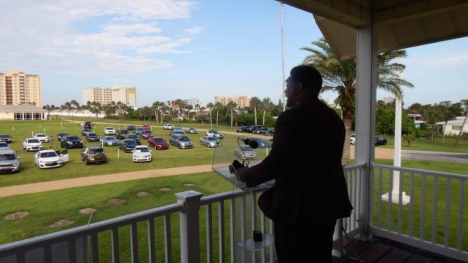 DAYTONA BEACH — A few years ago, a 7-year-old New Smyrna Beach boy was playing with two kids outside a closed school when they decided to go inside.

They wheeled their bikes down the hallways, got their hands on things they should not have, and left behind some damage and disarray as they rode back outside. The 7-year-old was arrested and charged with felony burglary among other crimes.

He was questioned at the police department for a few hours before his mother could see him. She said she “was terrified,” and her son was so scared he wet his pants.

A few weeks later the child vomited just before he had to appear before a judge. The youngster, who was less than 4 feet tall, had to stand beside the podium in court because he was too little to see over it.

The boy’s mother told the story during Monday night’s FAITH group rally to bolster the nonprofit’s push to steer as many children as possible away from handcuffs and toward alternative forms of punishment that don’t leave kids with criminal records.

Rehabilitation over punishment
FAITH, a 20-year-old organization whose members represent 30 local houses of worship, has been endeavoring the past few years to convince local law enforcement agencies to issue civil citations to kids rather than charging them with crimes whenever possible.

It’s been a legal option since 2011, when the Florida Legislature started requiring law enforcement agencies to offer a civil citation program.

The civil citations are available to kids 17 and younger who commit misdemeanors that don’t involve most sexual offenses, firearms, animal cruelty or gangs. Offenses that can be considered for civil citations include shoplifting, alcohol possession, loitering, school fights that don’t result in injuries and vandalism.

It’s another way for young offenders to face immediate consequences for their actions by having to pay restitution, write letters of apology and undergo counseling.

FAITH, an acronym for Fighting Against Injustice Towards Harmony, wants to see the number of kids receiving civil citations rise in Volusia County.

A few weeks ago, the group hoped that during their annual rally Monday night they could ask Sheriff Mike Chitwood and Daytona Beach Police Chief Jakari Young to commit to raising the percentage of eligible youth receiving civil citations to at least 80%.

FAITH disseminated information publicly that said the sheriff’s office had only diverted 28% of juvenile offenders to civil citations last year, and the Daytona Beach Police Department allowed only one child to receive a civil citation last year. Chitwood and Young said those figures are far below reality.

The sheriff said he has explained to FAITH leaders several times that the figures from the state Department of Juvenile Justice almost always show an undercount. FAITH leaders say they rely on those state numbers because they can’t get local counts.

The spat mushroomed and went public a little over a week ago when Chitwood posted a scathing rebuke of FAITH on Facebook, calling group leaders liars.

‘Make sure youth can learn from their misbehavior’
Chitwood and Young didn’t attend the event held at the Daytona Beach Drive-In Church on Monday, where people sat in their cars and used their vehicles’ radios to listen to speakers for two hours. But the few hundred carloads of people, and the hundreds of others listening live online still heard about the civil citation battle.

“We want to make sure youth can learn from their misbehavior instead of being defined by it,” the Rev. Phil Egitto, pastor of Our Lady of Lourdes Catholic Church and a longtime FAITH supporter, told the crowd Monday night.

A FAITH member wrote in a guest editorial published in The News-Journal March 14 that the sheriff’s office had issued civil citations to just 28% of all eligible youth last year. A press release FAITH sent March 17 to rebut Chitwood’s criticisms said the sheriff’s figure was only 23%.

Chitwood, though, has countered that the correct figure is 82%.

“FAITH met with Sheriff Chitwood on Feb. 9, 2021, to discuss the latest DJJ (Department of Juvenile Justice) data and statistics which yielded the disappointing 23% usage rate,” states the FAITH press release. “At that time, Sheriff Chitwood offered no information or explanation that disputed the DJJ data. In that meeting we mutually agreed that the focus should be on giving civil citations to all eligible children with the exception of those involved in domestic disputes.”

The press release went on to say that “FAITH has no access to information about civil citation usage outside of the DJJ website. If there is anything false or misleading about the information found on the DJJ website, FAITH has no way to ascertain the data’s validity without being in conversation with the State Attorney and local law enforcement agencies.

“Since April 30, 2018, FAITH has been asking for quarterly reports showing each civil citation the Volusia County Sheriff’s department issued, the gender and the race of the child, and the offense. We have received only two reports since 2018.”

The group said it needs more information to understand the discrepancy in data. FAITH distributed postcards at Monday’s rally that said the community wants more reliable data on juvenile civil citations by May 1. They plan to send the postcards to several local elected officials including Chitwood and State Attorney R.J. Larizza. Larizza also did not attend Monday’s meeting.

“We respect Sheriff Chitwood’s position as an elected official and his commitment to serve our community,” FAITH stated. “We expect him to respect us as his constituents who have the best interest of our Volusia County youth.”

‘The next generation is depending on us’
FAITH wants sheriffs and police chiefs to issue a memo explaining to their officers the process for issuing civil citations, and saying they expect them to be used for all eligible children who commit first-time, misdemeanor offenses.

The group also wants law enforcement agencies to appoint a senior officer to monitor and review all juvenile arrests to double check that none were issued for first-time, civil-citation eligible, misdemeanor offenses. They said they also want the State Attorney to set up a screening process to collect all of the arrests that were eligible for civil citations before they get to the clerk of court’s office.

“If the DJJ numbers are incorrect, as the sheriff has stated, we would like to see the evidence of that,” FAITH leaders said.

The Rev. Randolph Bracy, Dean of the College of Religion at Bethune-Cookman University, said Monday the FAITH group has to keep pushing for improvements in the civil citation system.

“The next generation is depending on us to speak out,” Bracy said. “No matter how much tension it causes we cannot afford to be silent.”

For more than two years FAITH has been urging local leaders to create the fund.

Two County Council members came to the event — Billie Wheeler and Barb Girtman —and said they support a study being done before the end of the year to look at developing such a fund. Wheeler and Girtman also said they support county staff looking into revenue sources to maintain the fund.

The two also said they would talk with FAITH over the next 30 days to discuss housing. Council member Heather Post sent FAITH an email saying she also supports looking into funding affordable housing.

“There is no more important role for us as a community than to make sure housing is available for all families,” Henry said.