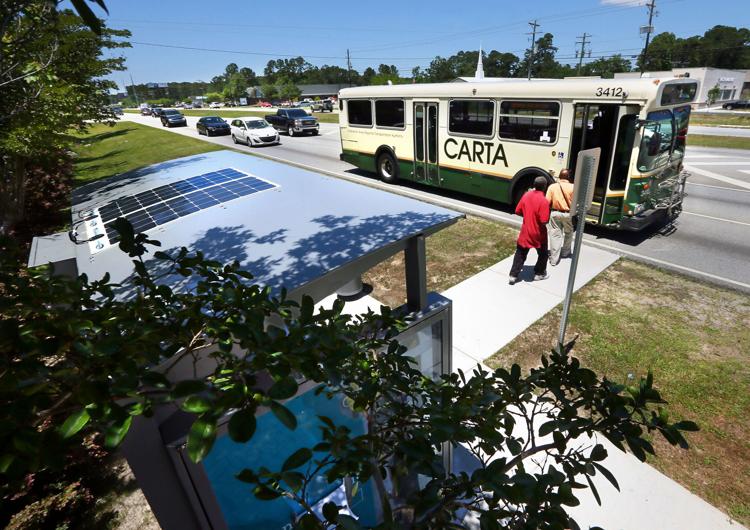 One of the worst things about using the Charleston area’s bus system — waiting at a bus stop with no shelter, exposed to the elements — is getting a lot better.

The Charleston Area Regional Transportation Authority is in the midst of a bus-shelter-construction boom, with the near-term goal of having shelters at 20 percent of CARTA’s bus stops. That would be 171 stops with shelters, 44 of which are expected to be installed this year.

In addition, the new perforated steel shelters and the existing shelters are lighted, using solar panels on the shelter roofs. Daniel Brock, a spokesman for the authority, said the solar systems already installed have been working well.

“The light is sufficient for safety and security, assisting the driver spotting people in the shelter and lighting the system map for customer navigation,” he said. “The lights have been remaining illuminated into the early (morning) hours.”

Each new shelter costs $14,000 but the total cost is closer to $22,000 each when land and construction costs are included, according to CARTA. The shelter and bench initiative is a $2.4 million effort.

“Our mission is to put out as many shelters as we can, within our budget,” said Mike Seekings, chairman of CARTA’s board and a Charleston city councilman.

“Part of the transit experience is where you are before you get on,” he said. “It should be comfortable, safe and protect you from the environment.”

Seekings credits former North Charleston Councilman Ed Astle, a CARTA board member, with securing a substantial amount of funding for the bus shelters.

“Back when I was on council, the (North Charleston) mayor — whether he was smart or he was stupid — gave each councilman $500,000 to spend on their district,” Astle said. “I would go up and down Dorchester Road and people were standing out there, so I said, ‘Why not take a chunk of my (district’s) money and give it to CARTA for bus shelters.’”

“I guess they were able to take that chunk of money and, through grants and stuff, that became more money,” he said.

At the July 15 CARTA board meeting, several fare-related changes will be considered that could reduce the price of bus-riding. The board will consider:

According to CARTA, the Charleston Area Justice Ministry was involved in bringing those potential changes to the board.