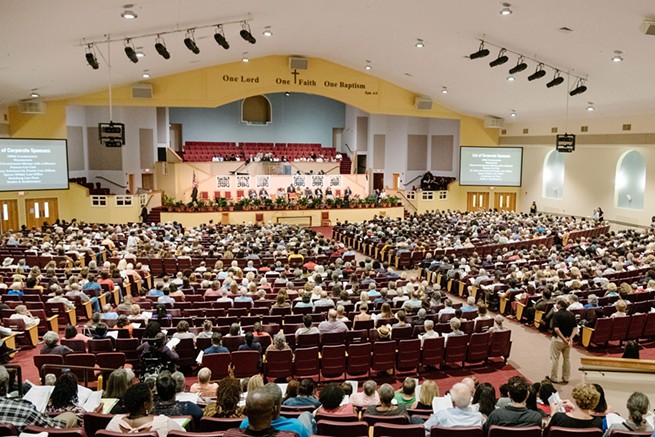 As 1,800 people greeted their friends and took their seats, there was no question what inspired them to attend a two-hour rally about local issues on a Monday night.

“The driving force of the Charleston Area Justice Ministry is not the causes we pursue, but the call we discern from God our creator,” said Rev. Brian Henderson of St. James Presbyterian Church, one of the 30 congregations that make up the Ministry, at the group’s annual Nehemiah Action.

Held at Mount Moriah Baptist Church in North Charleston, the rally sought to convince public officials to commit to demands inspired by the Ministry’s research on local transit and affordable housing.

All nine public officials in attendance vowed to help CAJM achieve its goals, which were outlined in a series of questions to be answered “yes” or “no.”

The strict format has led some public officials to shy away from the rallies in recent years, even as the group has been successful in affecting local policy.

“The structure gives some of my political brethren heartburn,” Charleston County Councilman Vic Rawl joked at one point.

No area mayors were in attendance, though invitations were sent out in December 2018, according to CAJM organizer Treva Williams. Congressman Joe Cunningham and state Reps. Marvin Pendarvis and JA Moore were in the building, though none answered questions onstage.

Transportation was the first issue on the agenda.

In November, CAJM members voted to tackle the region’s unreliable transit system after hearing testimonies from members who complained about inadequate routes and long wait times.

“When Miles was in pre-school, it took six hours every day to take him to and from school,” said Trena Walker, a single mom who has an eyesight problem that prevents her from driving. “I would take a bus from West Ashley to North Charleston and wait to catch the Leeds [Avenue] bus, which runs once an hour.”

Her eyesight has since deteriorated, and she can’t count on CARTA buses to tell her what stop she’s at.

“There are months where I spend $500 on Lyft rides because public transportation is so unreliable,” Walker said.

James Lewis and Dwayne Green, members of the Charleston Area Regional Transportation Authority board, agreed to push for what CAJM dubbed a “Fair Fares Plan.” The plan would eliminate ride limits on senior discount passes, create an unlimited weekly pass for low-income riders, and eliminate transfer fees during a single commute.

CAJM also called for CARTA to increase frequency and extend hours on routes 11, 12, and 32, routes that have heavy transfer rates with route 10, which is operational far longer than the other three.

“We recognize that this will take funding, and we stand ready to build the political will to make that happen,” said Rev. CeCe Armstrong of St. James Presbyterian Church.

Lewis and Green agreed to request funding from Charleston County Council by Nov. 1.

“Real progress is being made on fares, with a proposal going to the CARTA board this summer regarding senior fares, transfers and weekly passes,” said CARTA spokesman Daniel Brock in a statement. “When it comes to service frequency and expansion, it boils down to funding, and many of the right officials from the local, state and national levels who can help secure necessary additional resources were in the room [that] night.”

On affordable housing, the Ministry’s issue for 2018, area officials committed to pushing their respective bodies to contribute $10.8 million to a regional housing trust for those making 80 percent or less of the area median income.

“Currently, less than 20 affordable units per year are being built in Charleston County,” he said.

North Charleston is the highest eviction market in the country, and 72 percent of workers in Mt. Pleasant cannot afford to live there, partly due to the combination of high land costs and low-density construction.

“Our municipalities, my friends, do have the funds available to put the money towards a housing trust fund,” Heyward said. “They have it now, and I do mean right now.”

“We do need your support,” Brown told the audience. “We know one thing about CAJM: when they come, they come in full numbers.”