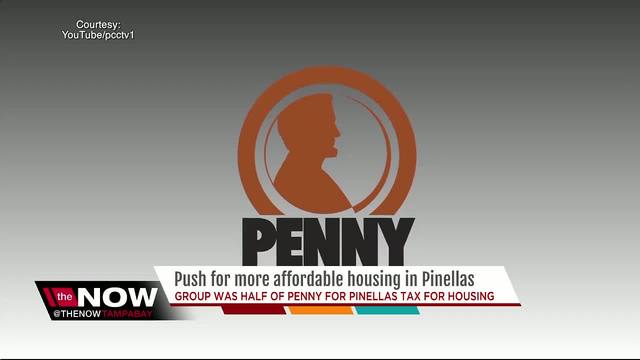 It’s official: Penny for Pinellas will be back on the ballot

CLEARWATER, Fla. – The Penny for Pinellas tax will officially be back on the ballot this November.

Pinellas County Commissioners approved the plan to place the 10-year renewal of the 1 percent sales tax on the November 7 ballot.

The tax has been around since 1990, and has been renewed by voters ever since. All the money collected by this 1 percent tax stays within Pinellas County, and in the past has paid for long-term capital infrastructure projects in both unincorporated parts of the county, and in all 24 municipalities, which must also agree on the spending plan (St. Petersburg would obtain about 18 percent of the money brought in).

It is that last project — affordable housing — that was the subject of much debate at the Board of County Commission meeting Tuesday.

A group of Christian community activities in Pinellas County called Faith and Action for Strength Together (FAST) brought dozens of people to the Board meeting Tuesday to show their support for spending the Penny for Pinellas money on affordable housing. They are calling for the commissioners to allocate at least 4 percent of the next cycle of money towards helping create affordable housing, which would come out to about $85 Million.

At the meeting, Board members heard a presentation by FAST, and voiced empathy for their points, but did not commit to the 4 percent request.

Right now the tax is set up to split $165 Million for affordable housing with money for “economic development” which account for about 8.3 percent of the total. FAST is asking for that 8.3 percent to be split about 50-50.

Commissioners seemed to suggest this was a reasonable request by the public, and asked for trust that they would follow through on a verbal promise to attempt to reach this request.

Right now over 2,000 families are on a waitlist for affordable housing in Pinellas County, where there is not much more room for home building because of limited space.

The tax is not collected on groceries and medications, and is only collected up to $5,000 of a single purchase.

If the tax is not renewed by the voters in November, Commissioners say they would likely need to resort to increasing the property tax. They prefer the current model because this way many tourists take part in the tax.