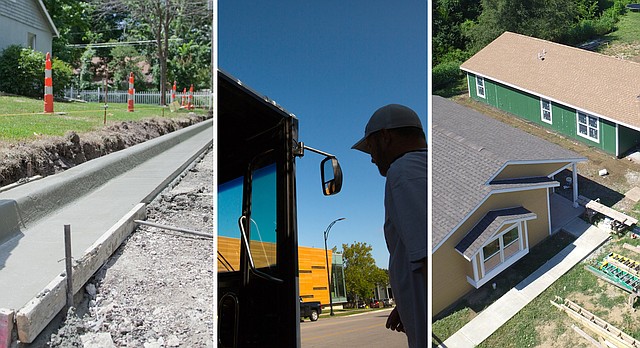 Lawrence voters approved all three of the sales tax questions in Tuesday’s general election, lining up millions of dollars in revenue annually for transit, infrastructure and affordable housing.

All three of the sales tax questions — totaling 0.55 percent and projected to generate $116 million over a 10-year period — were approved with comfortable margins, winning about 70, 73 and 62 percent of the vote.

“I think that it leads to participatory budgeting, which is something I’ve been really interested in,” Soden said. “I think it’s really important for us as elected officials to get that kind of feedback back from voters that, yes, they do want us to continue funding the bus; yes, they do want us to put more money toward affordable housing.”

Commissioner Lisa Larsen, who herself won re-election with overwhelming support Tuesday, also said the results of the sales tax questions show that voters are committed to funding those services.

The faith group Justice Matters, which includes representatives from several local religious congregations, was a vocal supporter of the sales tax to support affordable housing. Justice Matters board member Steve Ozark said that he was ecstatic to know that Lawrence was behind the initiative to solve the city’s affordable housing problem. He said he saw the vote as an “exponential step” in addressing what was becoming a crisis in the community.

The affordable housing sales tax question received some community criticism because there is not a specific plan for how the money would be spent. Though, the city has pointed to recent projects with Habitat for Humanity and Tenants to Homeowners as examples of what the money can be spent on.

Larsen said she is committed to ensuring the money is well spent.

One local group, the Lawrence Sunset Alliance, came out against the sales tax renewals. One of the group’s main criticisms is that sales tax is regressive and that the burden of overall taxes continues to increase. Though disappointed by Tuesday’s election results, group leaders said they are glad that the community engaged in a serious conversation about the sales tax renewals and that it’s a discussion that will continue.

“It’s an ongoing discussion about priorities and budget, and we’ll be involved in that,” said LSA treasurer Patrick Wilbur. “It doesn’t end tonight.”