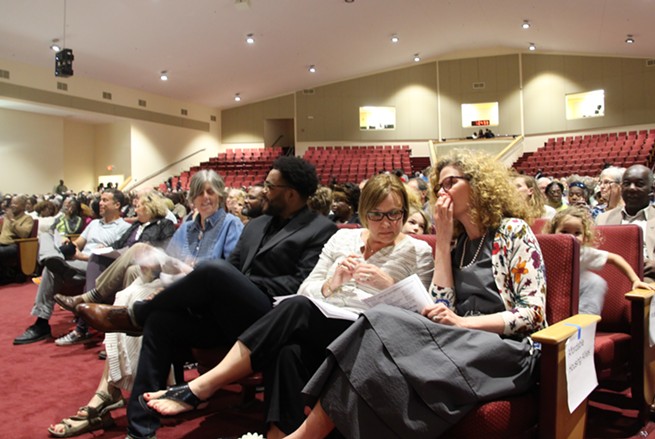 Nehemiah Action is arguably the largest gathering of policy-driven activists in the Charleston area. The rules of engaging with elected officials who show up to the meeting are created and enforced by the 27-member group to maximize clarity. They are asked yes or no questions and given 30 seconds to respond, after which their microphone is cut off.

The justice ministry collected 1,650 free “tickets” at the door.

Last night’s event was not as adversarial as the rules, or previous meetings, might suggest. Unlike the more contentious and emotional race-based issues that CAJM has tackled in the past, the affordable housing crisis is an issue felt by everyone, and one that is supported by staggering statistics.

A quarter of Charleston-area renters, about 21,800 households, spend more than half their income on rent, according to a study by Harvard University’s Joint Center of Housing Studies. The U.S. Department of Housing and Urban Development recommends that households spend no more than 30 percent of their income on housing and utility in order to afford other basic necessities. North Charleston, where the average person’s income trails Charleston’s by $16,000 a year, is now the highest eviction market in the country. Additionally, CAJM’s research, conducted between the group’s Community Problems Assembly in November and last night, found that the average Charleston renter would need to earn nearly $20 an hour to afford a two-bedroom apartment in Charleston County, much higher than the federal minimum wage of $7.25 per hour.

“Greater Charleston is a tale of two cities,” said Claudette Hart of Morris Brown African Methodist Episcopal Church in the Cannonborough-Elliotborough neighborhood of Charleston. “[Tourists] can sulk in Charleston’s culture, eat at fine restaurants, and relax. On the other hand, Charleston is a difficult place to live.”

CAJM’s proposed Housing Action Plan included the creation of a Regional Housing Coalition that will meet within 75 days to help write a proposal for a Regional Housing Trust Fund to be introduced at various local chambers. After that, officials are expected to champion dedicated sources of funding for the trust fund and report any progress at the next large CAJM gathering in November. The activist group argued that the existing South Carolina Community Loan Fund does not receive an adequate funding stream, and that the $20 million affordable housing bond passed in November by Charleston city voters does not do enough to solve the crisis. It is expected to bring 800 affordable housing units to the city. However, there are 211,000 who spend more than 30 percent of their income on housing in the Charleston area.

The regional trust fund idea is borrowed from cities like Milwaukee, which have seen success in the implementation of their own funds.

They all agreed to help the activist group fulfill its goals.

“What it means is: I’m not looking for work, but I will assist in any way I can,” he said.

After pressure from one of the moderators, Gregorie eventually relented and agreed to join the Regional Housing coalition to riotous applause from the nearly-packed sanctuary.

CAJM spokesperson Treva Williams stressed that the group sent invitations out in December, and that last night’s questions were also sent in advance. City spokesperson Jack O’Toole told CP that Mayor Tecklenburg would be out of town with his family on Monday night. It is unclear where the mayor went, but O’Toole said he was expected back at City Hall by Tuesday morning.

“The officials who came were clearly well prepared in terms of what we were asking for,” said Rabbi Stephanie Alexander of Kahal Kadosh Beth Elohim. “There’s still a lot of people who didn’t show up, and a lot of work to be done.”

Despite the positive responses, CAJM leaders urged the crowd to keep the pressure on by showing up to Council meetings and actively participating in their cities’ decision-making process.