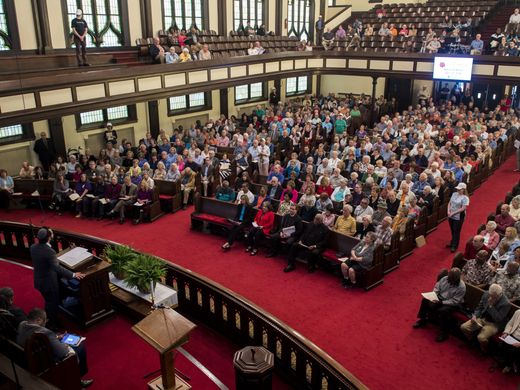 In pressing public officials to take action on social problems in Knox County, Justice Knox doesn’t shy away from tension — it embraces it.

“Collectively, we raise our voice and call for our public officials to hear their constituents,” Justice Knox Co-president Rev. Meredith Loftis told the hundreds of people who packed into Central United Methodist Church on Monday evening.

“This will cause tension, but let’s be clear, it is tension borne of hearts that care.”

About an hour later, Knoxville Mayor Madeline Rogero left the church. The other public official who was invited, Knox County Schools Superintendent Bob Thomas, didn’t attend. He was at a special called school board meeting for the school budget vote.

Justice Knox is an interfaith coalition of congregations that holds community meetings and conducts research to learn more about social problems facing Knox County. After a months-long process, group leaders devise steps they believe would help alleviate the issues.

The group then shares its findings with public officials and invites them to a “Nehemiah Action Assembly” — Monday’s was the second annual — where they’re pressed to answer “yes” or “no” to the group’s various “asks.”

Battle noted officials are told the asks ahead of time and said, “When you know the question before you take the test, that’s a pretty good deal.”

This cycle Justice Knox focused on two issues: a lack of affordable housing and a disparity in the number of school suspensions among minority and disabled students.

At Monday’s meeting, group members shared statistics and examples — some firsthand — to illustrate how each of the issues affects Knox County residents. Leaders then outlined their asks, and public officials were given a chance to respond.

Rogero attended the meeting and was applauded for her efforts to stem the worsening shortage of affordable housing across the city. She oversaw the creation of a $2 million affordable rental housing fund last year and has proposed $2.5 million for the fund this year.

Rogero, who said she spent “150 minutes” discussing the group’s asks with the city’s affordable housing committee, agreed to Justice Knox’s request she hold a fall summit to build community support for affordable housing.

The group also asked to work with Rogero to find a long-term source of funding for the city’s affordable housing fund, to set income targets to ensure part of the fund goes toward helping Knoxville’s poorest residents, to enact a 30-year affordability period for funded projects, and to create a community oversight board to protect the fund once she leaves office.

Rogero said she was open to exploring those requests further, but that she needed more information and time before she could commit one way or the other.

When the Justice Knox leader tasked with summarizing Rogero’s reply began by saying, “As of tonight, we hear you say ‘no’ to establishing a dedicated source of funding,” Rogero interjected.

“We have so many programs in place, to come and to sit in two committee meetings and say, ‘This is what we want you to do,’ and to get a ‘Yes, we will do it’ — I wouldn’t be doing my job,” the mayor added.

“This is something worth us researching, but … I have a problem with the whole format.”

The second issue Justice Knox focused on is the school district’s implementation of restorative practices. The philosophy favors punishments that build relationships and a sense of community over out-of-school suspensions, the group said.

“Our entire community suffers when children are pushed out of school,” said Joe Maddox, pastor at New Hope Missionary Baptist Church. “They drop out, they can’t find jobs, they get put in jail, and yes, they even wind up in an early grave.”

Suspensions in Knox County are disproportionately leveled on minority and disabled students, they said. Justice Knox leaders say many of those punishments are unnecessary escalations, and they believe school officials aren’t doing enough to remedy the problem.

The restorative-practices training of faculty and staff in the district has been “piecemeal,” Maddox said. “Piecemeal implementation without a clear plan has failed time and time again. Our district is setting itself up for failure.”

Although Thomas was at a school board meeting Monday, Battle said that since February, “we have been met with a series of deflections, delays, postponements and procrastinations.”

He gave out Thomas’ phone number and said attendees should call him to voice their concerns.