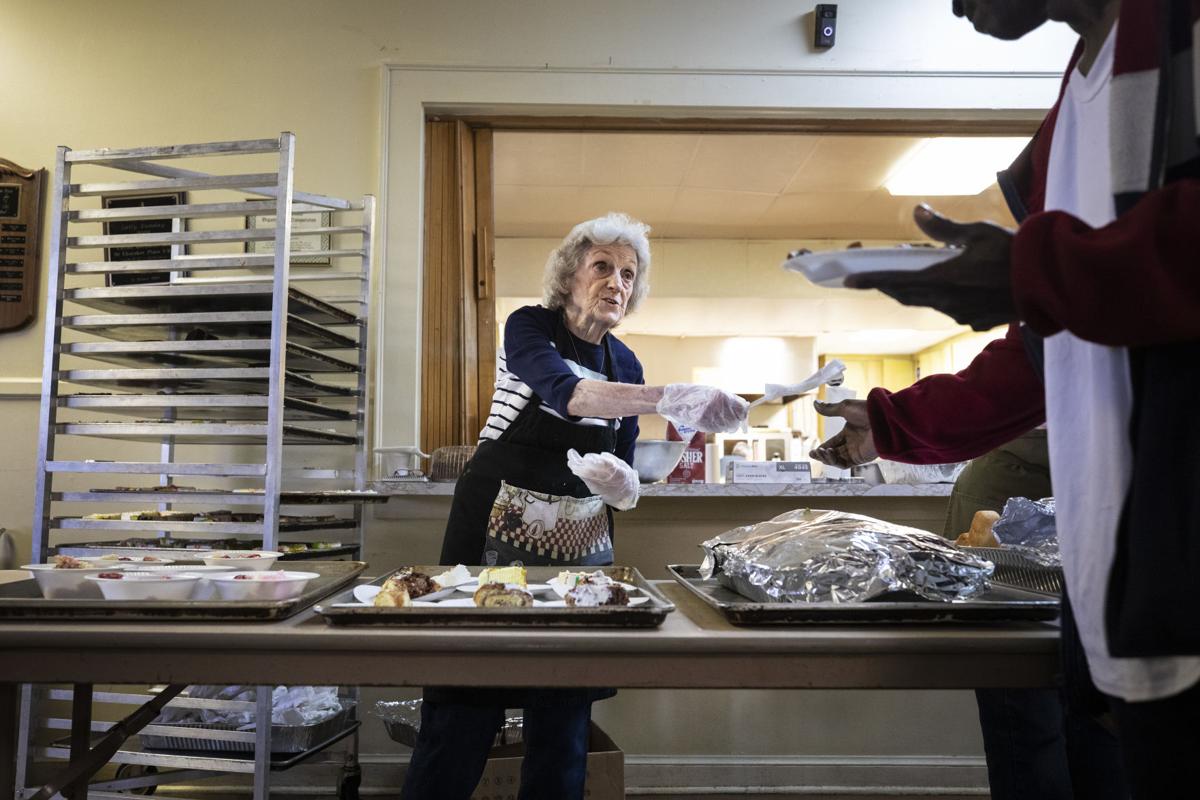 Charleston area churches on the front lines of addressing poverty

But the absence of a nearby grocery store gives the congregation an opportunity for ministry.

On the bottom floor of the church, a nonprofit provides hundreds of residents with vegetables, fruits, meat and hot lunches every week.

“We are the grocery store,” said Sue Hanshaw, CEO of Tricounty Family Ministries. “No charge.”

While the poverty rate has declined in Charleston County over the past few years, U.S. Census Bureau reports show that more than 50,000 county residents earn incomes below the poverty level.

The homeless throughout the area lie on city benches and wrap themselves in sleeping bags behind abandoned buildings.

To date, the nonprofit has had more than 6 million contacts with people and maintains more than 2,000 volunteers, Hanshaw said.

Years ago, the ministry needed a larger, more permanent home. On Cosgrove Avenue, much of Cherokee Place’s 22,000 square-foot facility sat empty throughout the week. The Rev. Ellen Younker saw this as an opportunity to serve.

“I would have nightmares about what we were paying for insurance for this building, and we were really only using five or six rooms,” said Younker, the church’s pastor.

The community stands in dire need of the help.

Located near the former Charleston Naval Shipyard, the neighborhoods off Rivers Avenue suffered when the base closed in 1996 and thousands of military families left the area. Today, these neighborhoods are home to low-income families who lack nearby conveniences, such as a drug store.

Churches open their doors throughout the week because they see themselves intimately connected to addressing the issues, pastors said.

At Cherokee, hot lunches are served and meals are delivered to the homes. Emergency groceries are given to families. Nurses offer health care to those without insurance. Counselors provide aid and prayers.

Near Spruill Avenue, St. John Roman Catholic Church has a food pantry that serves up to 20 families a week.

On the peninsula — where gentrification is displacing the poorest residents — Morris Street Baptist offers free food and toiletries for several hours each month to local residents.

Location in the inner-city has drawbacks, said the Rev. Melinda Jones, Advent Lutheran’s pastor. A rash of robberies took place years ago, including break-ins and copper thefts.

But there’s a fine line between helping and enabling, the pastor added, saying she’s encountered intoxicated and belligerent residents.

Still, closing the church doors to the community isn’t the answer, she said. Her church wants to be the kind of place that supports people and encourages them to make healthy choices.

“There’s a lot of need here,” Jones said. “Jesus reminds us that the poor will always be with us. Not because he wants to keep the poor oppressed. But it gives us the opportunity to serve.”

Church leaders recognize there’s only so much they can do, so many congregations are increasing their focus on collaborative efforts. St. John is part of the the Charleston Area Justice Ministry, an interfaith alliance of Charleston area congregations and organizations that proposes solutions to community issues.

This year, the alliance selected the lack of affordable housing and public transportation as its target issues.

Church leaders are witnessing the impact of rising rents in North Charleston. Brother Edward Bergeron, parish life coordinator at St. John, said the church is surrounded by run-down apartment buildings and U-Haul trucks are a common site as evicted residents move out.

The issue is too big for his congregation, which sees about 180 parishioners on a Sunday, to solve. Bergeron said others will need to help.

“It’s only in forming a coalition where that kind of stuff can happen,” Bergeron said.

Churches on North Charleston’s South End aren’t necessarily seeing an uptick in membership as a result of their community-based services. At Cherokee, some residents return for worship on Sunday. At Advent Lutheran, folks from the neighborhood sometimes trickle in.

For the most part, membership at many North Charleston congregations has declined in recent years — similar to many peninsula churches that have shuttered their doors and moved elsewhere because of gentrification and limited parking.

Advent Lutheran lost two-thirds of its congregation when the shipyard closed in the ’90s. Today, the church sees slightly more than 50 parishioners on an average Sunday. A few years ago, the church considered closing its North Charleston doors.

“They had that discussion many times,” Jones said. “But their whole thing was, who would serve the community? We’re needed here.”