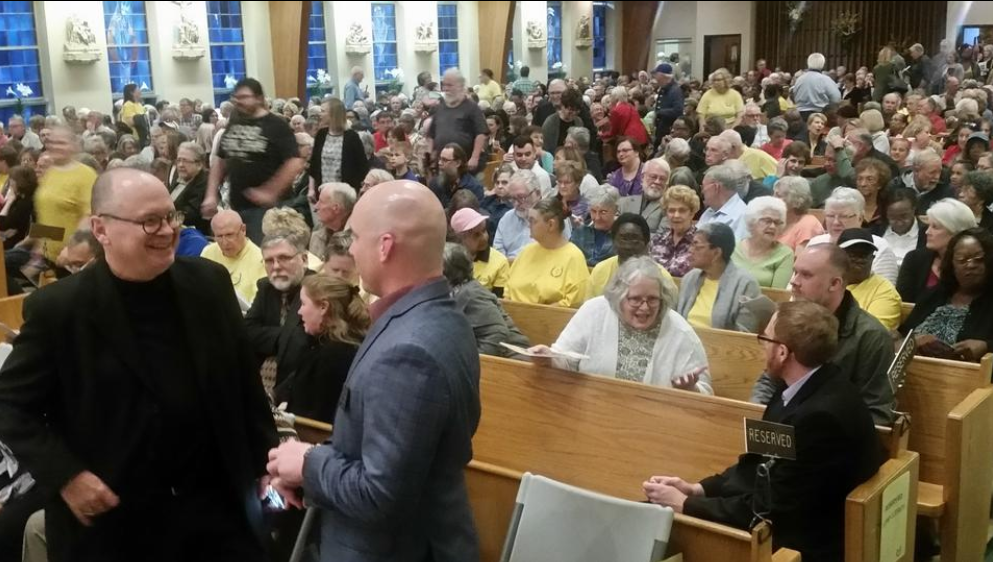 Religious fervor filled the Rev. Christine Potter’s voice Monday evening as she addressed more than 1,200 people from 23 Topeka-area congregations who packed into Most Pure Heart of Mary Catholic Church.

“Oh people of God — this beautiful, diverse body of God — we are called together to work our justice muscles in unity,” said Potter, associate pastor of Countryside United Methodist Church. “We are called to jump with our voices, with our hands, with our feet and our legs, our entire bodies. Topeka JUMP — jump for justice!”

Potter was among more than a dozen speakers at a gathering where leaders of the faith-based organization Topeka JUMP trumpeted its campaign aimed at convincing local decision makers to prioritize matters of poverty and injustice.

Topeka JUMP — the acronym stands for the Justice, Unity and Ministry Project — is urging political leaders to take specific steps to reduce violence and predatory lending while improving the availability of public transportation and safe and affordable housing.

Monday’s meeting was a mixture of piety and politics, with audience members at times calling out “amen” as they heard from speakers who included Topeka JUMP board member Joyce Revely.

Monday’s speakers talked about how Topeka JUMP would like for:

• The state of Kansas to make its payday loan laws much tougher on lenders.

• The city of Topeka to implement a group violence intervention strategy of the type pioneered by the National Network For Safe Communities.

• The city of Topeka to develop a robust affordable housing trust fund.

• The city of Topeka to allow a funding increase for the Topeka Metro bus service.

Monday’s crowd listened as Cochran agreed to help with Topeka JUMP’s efforts regarding a group violence intervention strategy, while De La Isla and Hiller said they would provide support regarding the affordable housing trust fund.

Shawnee County Commissioner Kevin Cook, who was also on hand, wasn’t called to the microphone.

Those present were also told that Topeka Councilman Tony Emerson had indicated in a text message that he would be willing to support increasing bus service funding, provided certain conditions were met.

• Most Pure Heart of Mary and Mother Teresa of Calcutta Catholic churches.