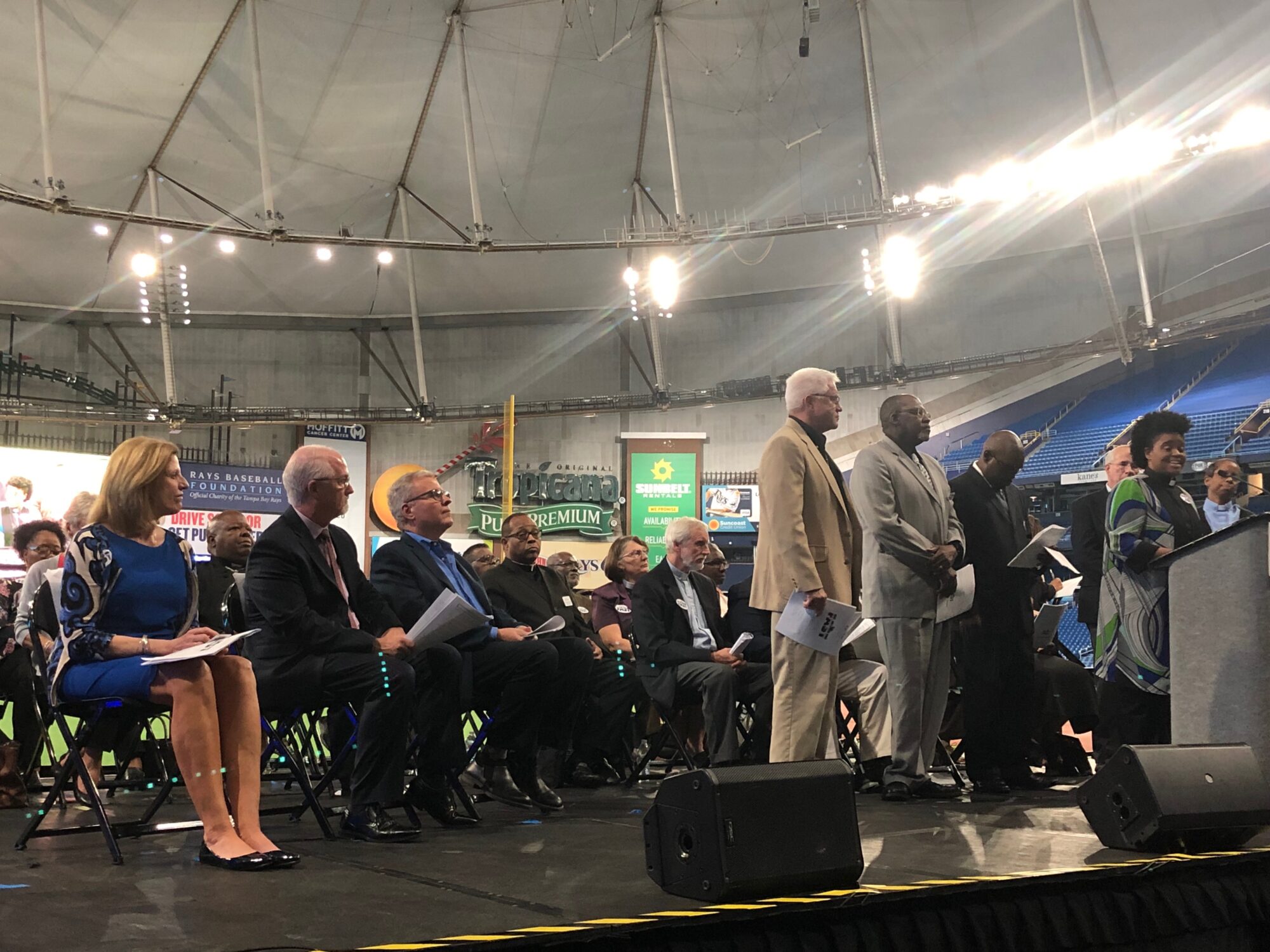 Residents of Pinellas County may soon have a single place to go when facing a mental health crisis, thanks to commitments secured by Faith and Action for Strength Together (FAST) Monday night at Tropicana Field.

FAST is a grassroots coalition of more than 40 religious congregations throughout Pinellas County. The organization gathered 2,500 people at Tropicana Field to ask public officials to commit to proposed solutions for systemic problems facing the county.

One major problem identified by FAST is the lack of easily navigable mental health services in Pinellas. Other counties, including Hillsborough, Orange, Miami-Dade and Manatee already have centralized mental health services in place; currently, Pinellas County does not have such a pathway. A search of the county’s social service hotline website for mental health treatment provides a list of 98 different organizations to call. At the same time, the number of involuntary hospitalizations due to mental health concerns (known as Baker Acts) has increased drastically over the last decade.

According to the Baker Act Reporting Center, between 2007-2017, Pinellas County’s rate of Baker Acts per year increased by 56 percent, while the population of the county grew by just 1 percent. When facing cases of severe mental illness, Pinellas County law enforcement officers are often left with just two options: arrest or Baker Act. Critically, individuals hospitalized under a Baker Act are released after 72-hour hold, which often sends them back out into the world only to repeat the same cycle.

The problem became so large that in 2017, the Sheriff’s office created its own mental health unit, comprised of two deputies and two social workers. That unit works exclusively on mental health calls and case follow up, full time. But law enforcement alone is not enough.

FAST asked “key stakeholders” including: Bob Gualtieri, Pinellas County Sheriff; Randy Russell, CEO of the Foundation for a Healthy St. Petersburg; Barry Burton, Pinellas County Administrator; and Linda McKinnon, CEO of Central Florida Behavioral Health Network to work together to come up with a plan for a central pathway for receiving mental health services, as well as ideas of how to fund such a project by Oct. 1.

All of the public officials agreed to work together to create the plan, including Sheriff Bob Gualtieri, who was not in attendance but signed a letter of agreement to the proposal the week prior.

“This initiative obviously is very complex and requires partnerships from so many,” said Burton, who took over the County Administrator role in October 2018. Burton said he will be touring a centralized facility in Orlando this month, and that his staff is hard at work looking at other models to find the best fit for Pinellas County. “I’m proud to work in a county that thinks with its head and its heart,” said Burton. “I know our commission supports that, it’s part of their strategic plan and initiatives.”

“We are actually laying the groundwork for this very action that you all came up with,” said Russell. The Foundation for a Healthy St. Petersburg is a private foundation whose mission is to advance health equity in south Pinellas County. The Foundation seeks to convene organizations to find solutions, and funds those solutions through grant making. “Looking at the energy of FAST and the ability of people in the community to drive where resources go is one of the huge fueling foundation resource principles we have,” said Russell. “So to hear this from you gives us energy and fuel to fly even higher, so thank you very much.”

As previewed by the St. Pete Catalyst, FAST also asked Mayor Rick Kriseman to attend Monday night’s event, to promise to spend $15 million in Penny for Pinellas funds evenly over the next 10 years, rather than waiting til 2023 to begin assignment, as the FY 2019 budget stated. The mayor did not attend, but took to Facebook to address the organization’s concerns. In the post, Kriseman explained the City’s position and confirmed that the city’s latest affordable housing project would be budgeted for FY 2020. The post reads:

“I am sorry I couldn’t attend tonight’s FAST – Pinellas County‘s Nehemiah Action tonight. As I indicated to their group several times during my last meeting with them, regarding the question of whether we had budgeted Penny funds for Affordable housing in 2020, we first needed to identify a capital project on which we could spend the funds, and then determine how we could forward the funds into our budget until such time as the Penny funds became available. I am now pleased to share with you and them that we have located a capital project on which to expend the funds and as such, are budgeting 1.75m of Penny money to be used for affordable housing in FY 2020. This is in addition to our existing annual commitments and will build on the progress we’ve made. Much, much more to come on this issue as quality, affordable and workforce housing is a priority! – RK”

FAST also celebrated the St. Petersburg City Council and the Pinellas County Commission for their efforts toward allocating funds for affordable housing. In 2017, Kriseman recommended and the City Council adopted a commitment of $15 million in Penny for Pinellas funds for affordable housing. Council member Darden Rice attended the event on behalf of the Council. Earlier this year, the County Commission unanimously passed a resolution allocating 4.15 percent of the 8.3 percent of Penny for Pinellas allocated to economic development capital projects and housing strictly to affordable housing. Commissioners Janet Long, Pat Gerard, Dave Eggers, Charlie Justice and Ken Welch were in attendance.