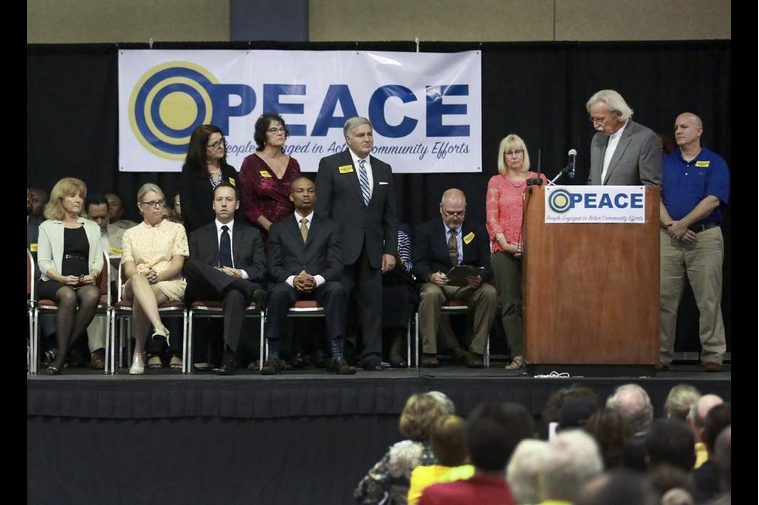 Homelessness, racial profiling to be addressed at annual PEACE meeting

Homelessness and racial profiling are the focal points of this year’s annual PEACE Nehemiah Action Assembly, to be held 7 p.m. Monday at the Palm Beach County Convention Center in West Palm Beach.

PEACE, which stands for People Engaged in Active Community Efforts, is a social-justice ministry organization founded in 1991 and is composed of 18 congregations in Palm Beach County. The group expects more than 2,000 people to attend.

To address these issues, the group will ask the Palm Beach County Commission to promise to speed the process of building a second Homeless Resource Center and to preserve part of a $25 million pot of tax revenue to address the housing need for residents most in need.

Also, because members of the group believe there is a pattern of racial disparity in traffic stops, they will ask law-enforcement officials to collect data when they pull vehicles over in hopes to “catch biased policing early on,” a news release said.

The group says its large membership is key to its addressing critical community issues, and part of turning their ideas into realities involves getting elected officials on board.

According to PEACE, all seven county commissioners, Palm Beach County Sheriff Ric Bradshaw, Palm Beach County School Board member Marcia Andrews and police chiefs for Boynton Beach, Delray Beach and West Palm Beach were invited to the meeting. As of last week, four commissioners and Andrews have confirmed they would attend, according to the group, and Boynton Beach police will send Assistant Chief Joe DeGuilio to represent Chief Michael Gregory.

“We aren’t going to let this stand,” the Rev. Gerald Kisner, pastor of Tabernacle Missionary Baptist Church in West Palm Beach, said in a news release of the lack of unanimous attendance commitments. “These are our public servants, and for them to think they can just dismiss the single largest grassroots gathering of their constituents that takes place in this county — that is something we can neither understand, nor stand for.”

At last year’s meeting, one of the key goals was to create a community ID program. Last month, after a three-year effort, that program became a reality.

The Community ID Program of the Palm Beaches, administered by the Legal Aid Society of Palm Beach County, began March 30, where about 1,500 people showed up during the first ID drive, according to the group. About 300 people were able to submit applications.

Jill Hanson, who sits on PEACE’s executive board and spoke during a Boynton Beach City Commission meeting last month, said the purpose of the program is to offer identification for the most marginalized people in Palm Beach County.

Those who are homeless, undocumented, re-entering society after serving time in prison, seasonal residents and youths are some of the people who could benefit from having such an ID because they are needed in situations such as interactions with law enforcement, registering children in school and youth programs, visiting someone in a hospital and receiving medical care, Hanson said.

″(The program) seeks to make Palm Beach County a more safe, inclusive and welcoming place for all of our residents,” she said.