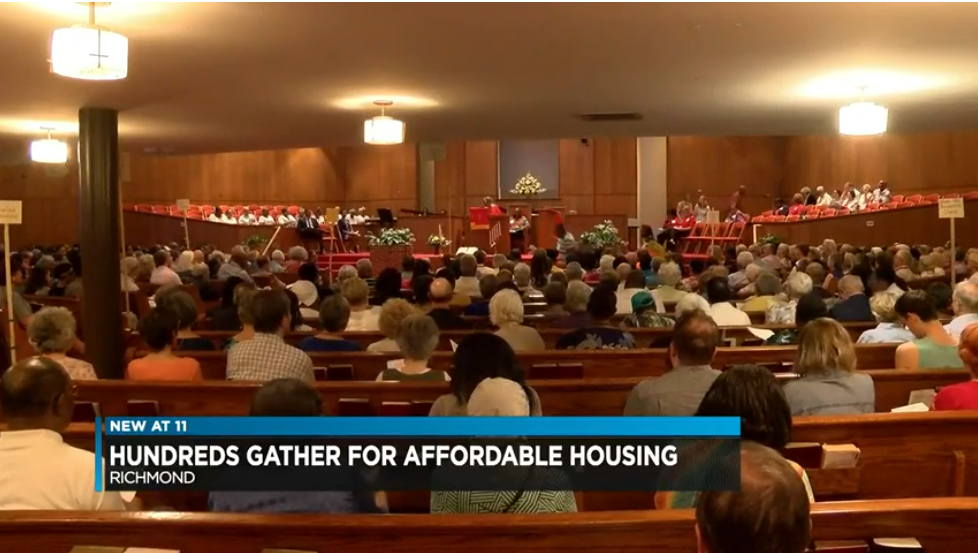 RICHMOND, VA (WWBT) – There was a massive response Thursday night to Richmond’s ranking of being one of the worst cities in the nation for kicking people out of their homes.

Hundreds of people gathered on the Northside pledging to hold city leaders accountable in their goal of reducing the city’s staggering eviction rates. After reports of Richmond being second in the nation for evictions surfaced, Mayor Levar Stoney vowed to take action.

Many are applauding that move, but they say it can’t stop there.

Heather Brannon has a heart for people and is weeks away from graduating from seminary to one day become a pastor.

“It’s a vital part of my call,” Brannon said.

While studying here, she mentored students in Richmond’s public housing complexes and said one family stands out in her mind.

“The mother was dying from cancer. The daughter had dropped out of high school to help pay the bills, and obviously it didn’t pay off,” Brannon said.

They were kicked out of the very place people turn when they need affordable housing, forcing them to the unexpected.

“(They) lived in their old 96 Toyota Corolla parked behind an abandoned building,” Brannon said.

It’s stories like these that compelled hundreds of people to rally together Thursday to demand Richmond do more. It’s part of the Richmonders Involved to Strengthen our Communities’ Nehemiah Action Assembly. People from churches across the city – all backgrounds – united in their plea.

“Women and children. Kids who can’t get to school. They’ve got to go live somewhere else. All of your stuff on the street? How would you feel about that?” Dorothy Hollahan asked.

City leaders were on hand saying they agree. Stoney has proposed $485,000 for an Eviction Diversion Program and $2.9 million for an affordable housing trust fund.

Those in attendance couldn’t be more excited, but their goal now is to make sure those promises come to fruition.

“So we keep them accountable,” Hollahan said.

“We need to continue fighting for those whose voices are being silenced in our community. This is only the beginning,” Brannon said.

Both realize this is a fight for all people.

“It’s the working poor. They’re on the edge. Their car breaks down. You can’t get to work. You miss hours. You have a healthcare crisis. You’re living on the edge, and housing is the first to go,” Hollahan said.

The group also focused on improving Richmond’s schools, pointing out that last year nearly half of all third-graders failed reading. An RPS representative told the crowd they’re willing to work with those who showed up, creating a community collaboration to help Richmond rise.