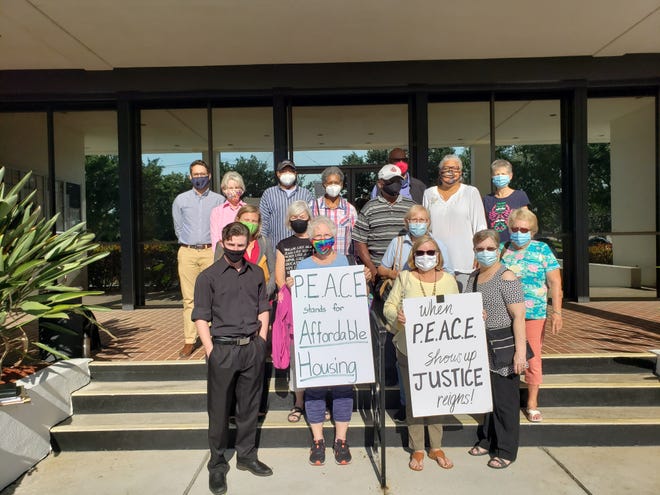 When Sean Marley got his own room for the first time, he couldn’t sleep for days.

Marley, 18, had spent most of his childhood bouncing from place to place, never settling down or finding a home. He didn’t know what it meant to have privacy, stability or even a steady source of food.

“We lived in a ghetto for years and split rent, but we were still paycheck to paycheck. Barely,” Marley said. “For most of my life, I slept on a floor.”

Housing insecurity had a tumultuous effect on Marley’s life. Even now with a roof over his head and a room of his own, he keeps waiting for it to all come crashing down.

“It took some time to adjust, and even still, I wake up in the middle of the night because I do not remember where I am,” Marley said. “If I am honest, I am preparing for the worst to happen always. I’m so used to being unsettled because everything in my life has been out of my control.”

Marley, although a resident of Lakeland, was one of several people to speak at the April 12 Winter Haven City Commission meeting. The Polk Ecumenical Action Council for Empowerment, commonly known as PEACE, gathered speakers to call for more affordable housing in the city and a commitment from commissioners to allocate more funds toward the long-term issue.

PEACE is an alliance of various religious congregations that pushes for social-justice causes in Polk County, such as the issue of homelessness.

Polk County as a whole struggles with affordable housing availability, particularly in its two most populous cities, Lakeland and Winter Haven. While Lakeland has been steadily chipping away at adding 600 affordable housing units between 2018 and 2021, Winter Haven has yet to make similar progress. Advocates are worried about the failure to produce concrete plans, especially as the pandemic drives more children into insecure housing situations.

Homelessness in Polk County
Members of PEACE are particularly concerned about homelessness because of the number of children in Polk County who face housing insecurity in one form or another.

Ben Ruch, the county’s homeless liaison with the Hearth Project, said he’s identified 3,352 students experiencing homelessness in Polk County as of April 14. He noted that the number does not include the five charter schools in Lake Wales.

In Winter Haven specifically, there were 457 students experiencing homelessness as of March 25.

Ruch said those numbers are likely underreported. For one, the Hearth Project is never able to identify all of the students experiencing homelessness, as some families will refuse to disclose their struggles.

“Some families feel like being in a homeless situation is a crime — which it’s not — but they’re afraid,” Ruch said. “The greatest thing our program can do is year in and year out, you know, work our butts off to identify as many kids as we can.”

The pandemic may also affect the number of students reported as homeless for the 2020-21 school year. Ruch said as long as children have internet and a device to work on, it doesn’t necessarily matter where they work from. So students may not report housing situations as they would if they needed accommodations such as bussing.

Students can be considered homeless under several conditions, such as:

• Living “doubled up,” as in moving in with other family and friends.

• Living in a motel.

• Living at a shelter.

• Or living in housing with substandard conditions, such as with bad mold or persistent pests.

Ruch said living doubled up is the most common form of homelessness for students in the county, accounting for 62.5% of the cases in the 2019-20 school year.

Ruch said living doubled up is the most common form of homelessness for students in the county, accounting for 62.5% of the cases in the 2019-20 school year.

“It’s an issue that’s not going anywhere,” Ruch said. “I mean it’s not getting better with the pandemic and the potential moratorium ending, we kind of are anticipating that it could get much worse.”

Affordable housing: the long-term problem solver
When asked what the best solution would be for homeless children throughout the county, Ruch didn’t hesitate: affordable housing.

Ruch said while other solutions, such as investment in shelters, might be helpful, affordable housing is the only way to ensure families don’t need to constantly rely on outside help.

“An affordable home is a first step many people need to get a job, and after that, they can grow from there. We’re in the land of opportunity, so we must have opportunities reach the poor and homeless as well,” Marley said in a text to The Ledger. “We need proactive solutions, not reactive. Shelters and food banks are reactive because they only help temporarily. Affordable housing is proactive because it goes to the roots of the issue and has many long-term benefits for everyone.”

Terry Bucher, a member of PEACE’s board of directors, said the organization first started pushing Winter Haven on affordable housing three years ago. After starting the effort to address homelessness in 2017, PEACE secured a commitment from Mayor Bill Mutz in Lakeland, resulting in the promise of 600 affordable housing units by the end of 2021. In February, the city said 456 units had been built.

The city of Winter Haven agreed to erect 150 affordable housing units through partnerships, but none of those have yet materialized. Mayor Pro Tem Nathaniel Birdsong said the city itself would not be building any units.

At the city’s commission meeting, residents called for Winter Haven to invest $500,000 a year over the next three years into an affordable housing trust fund, a solution that has been used by other municipalities to secure affordable housing funding. They also want to see 150 units built and for housing to be prioritized for families making less than $30,000 a year, or 50% of the area median income.

Bucher said members of PEACE were “frustrated” with the city’s lack of commitment to a firm plan to make their demands happen and get homeless children into steady shelter.

Birdsong said the commission will not be ready to make any firm promises until after the city’s strategic plan is completed, which he expects to happen before Sept. 1.

“I’m waiting for the strategic plan to be developed so that we can come up with a strategy and a plan to basically address the issue of affordable housing in a meaningful way in the city of Winter Haven,” Birdsong said.

At the meeting, Bucher pushed back against Birdsong’s calls to wait for the plan’s release, saying it had already been too long. But Birdsong said this process isn’t something that can be rushed.

“The nature of the problem is of that magnitude,” Birdsong said. “It’s not, and I wish it was, but it’s not a problem that’s quickly solved.”

The Rev. Clifton Dollison of First Missionary Baptist Church, one of the congregations that makes up PEACE, said that if Winter Haven continues to push off solutions, more and more people, particularly children, will fall through the cracks. And that could cost people a future they’re entitled to.

The apartment complex consists of 16 studio apartment units, each only about 350 square feet and able to accommodate up to two people.

The units were set aside for low-income and disabled residents and veterans whom make no more than $24,696 as an individual or $28,224 for a two-person household. Rent runs between $350 and $650 a month, depending on income; additionally, residents will not pay more than 30% of their income for rent.

The Vermont Place Apartments are just the latest example of how severe the demand is for affordable housing in Lakeland.

Martinez said of the 105 applicants, 67 were eligible for the apartments.

As demand continues to rack up across Polk County, advocates demand solutions. And fast.

Because the effects can be immediate: Marley, whose family was once so hungry his sister ate a raw Ramen Noodles packet, feels like he can finally breathe again since finding stable housing.

“I feel like I’m out of a black hole,” Marley said. “I’m still not entirely used to it, but I’ll get there.”