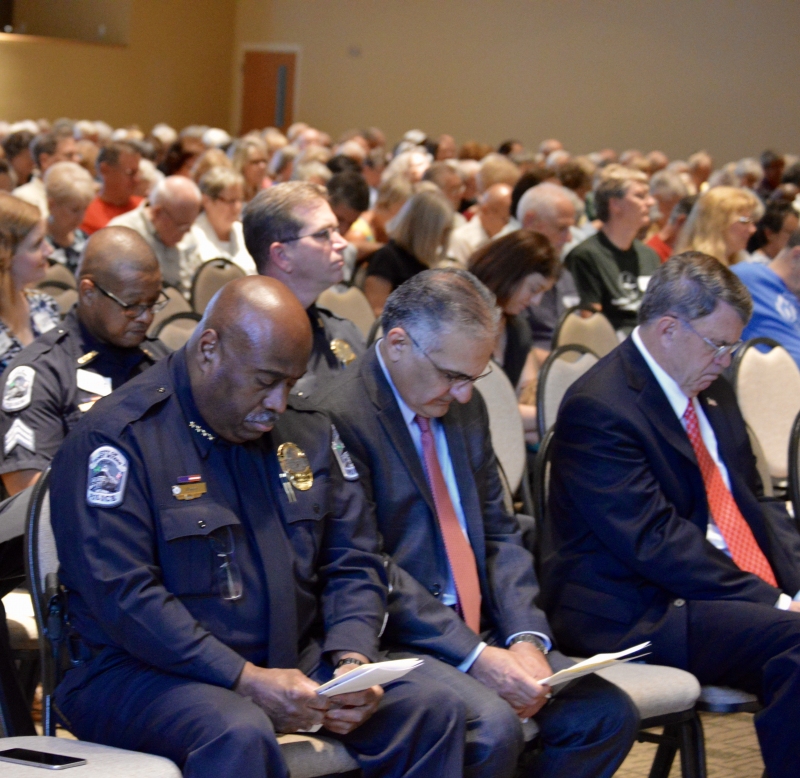 There’s a whole lot of soul-searching going on in Fort Myers in the wake of a scathing report on the Fort Myers Police Department that unveiled its long history of cronyism, cover-ups, inadequate resources and under-trained staff.

“It’s a very harsh report,” Derrick Diggs, the recently hired police chief, told a crowd of several hundred residents Tuesday night at the Lee Interfaith for Empowerment (LIFE) organization’s annual Nehemiah Action social justice rally. “I have my frustrations. I have concerns, but I also know that the report is what the report is. Myself and the officers on the police department are gonna embrace that report.”

And he did, publicly pledging to implement a series of recommendations pertaining to improving homicide investigations and community relations. Those included re-establishing a Dunbar police substation, hiring more investigators, increasing road patrols and creating safe mechanisms for witnesses to report crime.

A rash of shootings in 2015-16, including a drive-by at a nightclub that killed two teens and wounded 18 others, put the spotlight back on Dunbar, the long-troubled community east of downtown Fort Myers. Gulfshore Life spent a year in the neighborhood meeting with teens to understand the roots of violence and the potential solutions for ending it.

The Freeh report, drawn largely from the interviews of current and former FMPD officers and employees, confirmed what many residents had long complained about: heavy-handed policing, inadequate investigations, unaddressed gang violence and readily dismissed charges of police misconduct.

“The things they were doing in the community baffled me,” says Angela McClary, who last summer founded a chapter of Parents of Murdered Children. Her son, Deonte Redding, was killed in 2014 along with his half brother. The case remains unsolved.

But she’s hopeful, too, with the hiring of Diggs and the public airing of the report. “Their integrity was knocked down. They were not accountable for their actions. All that plays into trust. But I believe there’s going to be a better outcome.”

City officials are taking their share of blame, too.

“We knew things were happening, but we didn’t take them seriously enough,” says Councilman Johnny Streets, whose ward includes Dunbar. He said he had tried to call attention to residents’ policing concerns in the past, but had not been “forceful enough” to provoke change.

“You can’t fix it unless you face it,” Streets said. “We will go forward, but remembering where we came from so we don’t repeat the same mistakes.”

The Rev. William Glover, pastor of Mount Hermon Ministries in Dunbar and LIFE co-president, hopes the report and the community conversations following it will begin to heal the divide between residents and police.

“I think we are seeing progress,” said Glover, who also stressed the importance of not “demonizing” the department. “The report validated and confirmed a lot of community concerns and complaints that have been ignored or described as a ‘perception problem.’”

“The divisions are very, very deep,” he said following the meeting. But he said he was working to make inroads. “Until we build trust, there’s no way we can expect the community to support us.”

Residents have to do their part, too, said Taunya Cola, who heads the Dunbar Neighborhood Watch. And that includes giving Diggs the time and the space to do his job. While she applauds relationship-building efforts, she cautions against too much meddling and too many public appearances.

“Right now, we need to let the process work,” she said. “We’re not giving him the room to do what he needs to do.”