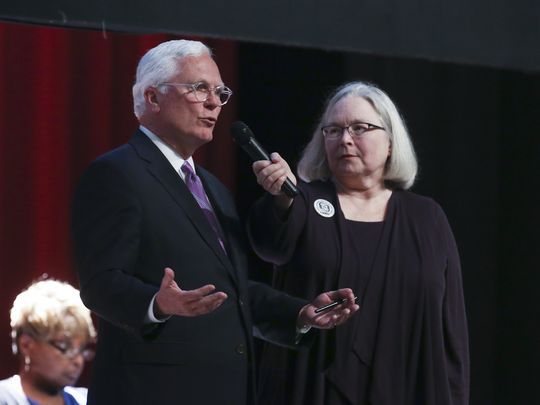 The “Safe City” platform of Citizens of Louisville Organized and United Together, or “CLOUT” was on the table Tuesday in a gathering of hundreds of residents, elected officials, civic leaders and activists at the Memorial Auditorium in Old Louisville.

Representatives from 22 churches and religious organizations led a conversation with officials about the agenda of affordable housing, education reform, substance abuse and mental health treatment.

An estimated 1,200 people gathered to participate in a conversation with officials like Jefferson County Attorney Mike O’Connell, Steve Durham, Assistant Director of the Louisville Metro Department of Corrections and Judge Stephanie Burke of Jefferson District Court.

Officials in turn were challenged to address issues in meetings in coming months. Innovative programs being studied included the “LEAD Program” in Seattle begun with a $4 million grant, O’Connell said. In contrast, he added, there is no funding for that kind of intervention in Louisville in which police take drug offenders to treatment centers in lieu of jail.

“We feel urgency in this room tonight,” said the Rev. Reginald Barnes of Brown Memorial CME Church, adding he missed the presence of Louisville Metro Police Chief Steve Conrad and Mayor Greg Fischer. “We know that the work that we do together will truly move us closer… so that the healing of our city will indeed spring up quickly.”

Full funding of the Affordable Housing Trust Fund, or a commitment of $10 million annually by the city, is on the agenda, Catholic Charities representative David Dutschke said. Other measures to constructively combat drug abuse include reform which would allow police to lead drug users to treatment in lieu of booking them into the overcrowded jail, according to the evening’s program.

“My greatest fear is that my daughter will have another relapse soon and her life will be in danger, maybe at the hands of police,” said a letter read aloud by a CLOUT member for Dawana Wilson, a Louisville mother of a mentally ill child who has experienced little help from law enforcement.

Louisville Metro police too often take a punitive approach and have little training in dealing with mentally ill persons, said Danielle Fife, who spoke of her brother’s battle with mental illness that ended in suicide after repeated incarcerations for disorderly conduct.

“It may be too late for my brother,” Fife said. “I am here tonight so that other people like him will not have to suffer.”

“Last year, 324 Louisvillians overdosed, almost one per day. So far in 2017, the homicide rate is already 27 percent higher than last year,” Finzer said.

Last year’s $2 million in funding for the housing trust stood at 20 percent of the recommended level and half being spent on an animal shelter upgrade and renovations to city hall, Moore said.

Unable to sell her house in West Louisville, Lucille Moore said she was a “granny in the hood,” enduring rising property taxes while crime rose. “The realtor told me I can’t get nothing for my house,” Moore said.

Metro Councilman Brent Ackerson answered “maybe” when asked if he would support asking the budget committee to commit $10 million to the housing trust fund, if Mayor Greg Fischer does not commit that amount.  Councilpersons Brandon Coan, Bill Hollander and Barbara Sexton Smith answered aye to that question.

“We are a city full of needs,” Ackerson said. “It might make people mad but all I can do is be honest with you.”