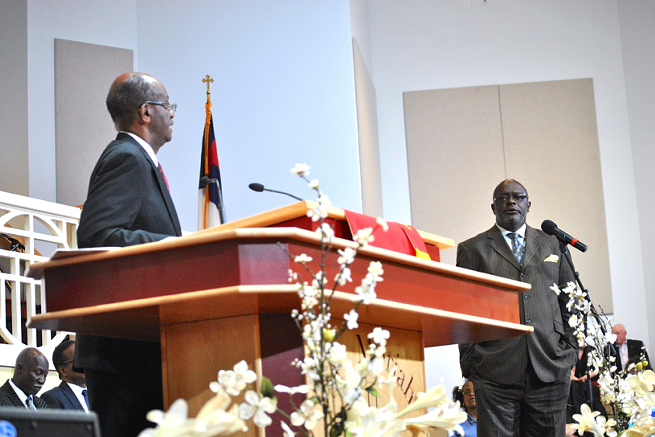 Charleston Area Justice Ministry doubled down on calls for policing reform during the multi-denominational coalition’s annual Nehemiah Action Assembly. A confrontational exercise by design, this year’s meeting saw five Charleston City Councilmen vow their support for more transparency regarding police stops and bringing in a firm specializing in racial bias to examine the Charleston Police Department.

While all city departments are currently undergoing an efficiency audit, CAJM is calling for a firm specialized in assessing racial bias.

“Charleston has budgeted $87 million for public safety with much of it going toward police and fire departments. This is over half the city budget. With such resources devoted to public safety, wouldn’t the city want to hire a qualified firm with the expertise needed to address the urgent problem of racial bias in policing? That’s how we will build trust between our community, our public officials, and our police,” said CAJM co-president Jeremy Rutledge.

Charleston City Councilmen Keith Waring, William Dudley Gregorie, James Lewis, Robert Mitchell, and Rodney Williams all agreed to push for requiring that the Charleston Police Department collect all stop data and report it to the public. Only Williams was reluctant to request a specialized auditing firm, saying that he would prefer to see the results of the audit currently underway before requesting another. CAJM members voiced their concern that only Charleston City Council’s African-American members were willing to attend the assembly and openly confront claims of racial bias.

Only one city representative from North Charleston, Councilman Mike Brown, attended the meeting. After an intense exchange last year, there were no signs of Charleston Mayor John Tecklenburg, save for an empty parking spot reserved with his name. Tecklenburg did release responses to CAJM’s questions, saying that the “Charleston Police Department currently collects the vast majority of this information and makes it available online as part of our Open Data Project.”

According to the mayor, pedestrian data is available on the website now, and the city is working to make traffic data available. CAJM leaders called the data as currently presented online as unclear and containing significant gaps. In a statement, Tecklenburg defended the procurement process used to hire Novak, the firm conducting the bias-based policing audit of the Charleston Police Department, but CAJM maintained that a more specialized approach is needed.

“We need an auditing firm that has the skill and experience required to do this work in a way that is thorough and rigorous, including an assessment of policies, procedures, and use of force, along with data collection and public accountability, just like the work the Police Foundation is doing in North Charleston,” said Rutledge.