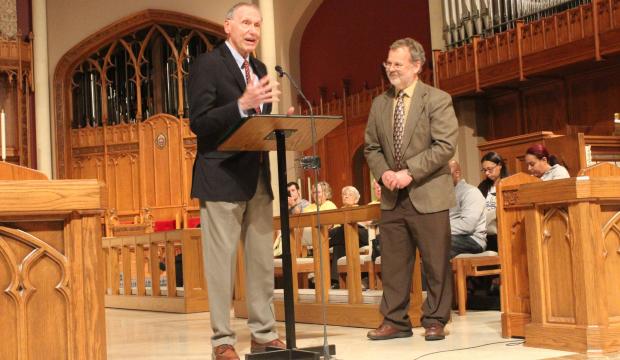 “This attendance tonight is evidence we are building a culture of justice in our congregations,” Eve Kendall, of Central Congregational Church, told the crowd of nearly 1,000 people.

Bradley Bowersox came to Topeka in 2014 to reunite with family. He told the crowd he struggled to hold a job and soon couldn’t afford the cocktail of medications he needed to combat anxiety related to post-traumatic stress disorder. While off his medication, he became convinced late one night that people were breaking into his home. After making his fifth call to 911, he was arrested.

Bowersox likely could have benefited from a program called supported employment services, which pairs people with certain mental illnesses with a liaison who works with employers to help them understand mental health needs, said Bill Persinger, CEO of Valeo Behavioral Health Care.

“It’s saying, ‘Hey, here’s this employee who wants to work, but they have some challenges, so here’s some ways we can support them,’ ” Persinger said.

Valeo currently employs 10 such counselors, but Persinger and Brian Cole, director of the Shawnee County Department of Corrections, told the crowd they were in the midst of developing a partnership that would provide a counselor for inmates. That position would identify inmates eligible for supported employment and work with them while incarcerated and immedately after release.

“We need to end the stigma of mental health illness,” Cole said.

JUMP last year asked city officials to look into establishing a fund to support improving affordable housing. About $500,000 has been earmarked out of the more than $10 million left over in the city’s share of the countywide, half-cent sales tax. Last week, the city council tabled the matter until May 16 to confirm the funds can be used for housing, but Mayor Larry Wolgast said he hopes it will be seed money for a fund to which foundations, corporations and private citizens can donate. As funds grow, they would be allocated for housing rehabilitation and upgrades and other projects.

JUMP had requested a goal of $2 million in funding for the program. The concept mimics programs the city funds through about $2 million from the U.S. Department of Housing and Urban Development.