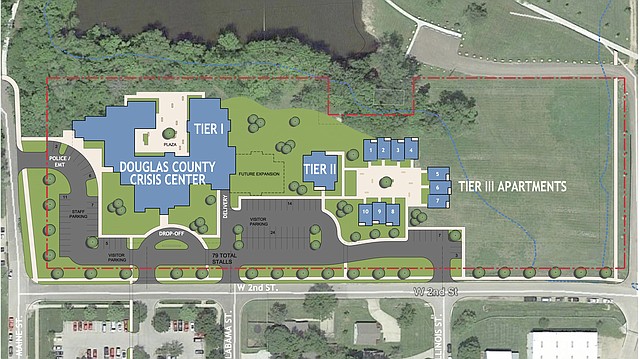 If Douglas County does decide to pursue a mental health crisis center, any bond issue to fund the center should be presented separately from a proposal to build a new county jail.

A plan for a mental health campus was presented to Douglas County commissioners last week. The site is north of the Bert Nash Community Mental Health Center along West Second Street and northeast of Lawrence Memorial Hospital. The campus would provide three tiers of housing for people experiencing mental health crises:

• An eight-room residential ward within the behavioral health crisis center.

• A two-story transitional coed group home with eight to 12 beds for those leaving the crisis center or others needing temporary supportive housing.

County staff, leaders with Bert Nash, representatives of the Lawrence-Douglas County Housing Authority and other agencies continue to work on the details of the plan, but no price tag has been determined yet. The goal is to produce an affordable and sustainable plan for new buildings and services to put before voters, said County Commissioner Nancy Thellman.

By contrast, the county has already settled on a $44 million expansion of the Douglas County Jail that would add 179 beds, nearly doubling the size of the 186-bed jail. A date for the bond election for the county jail expansion hasn’t been established yet, though it could come as soon as this spring.

Justice Matters, a faith-based group that advocates for social issues in Lawrence and Douglas County, has been a strong advocate for the mental health campus and has expressed concerns about the jail expansion in the past. Justice Matters wants any mental health bond issue to be presented to voters as a stand-alone proposal.

That’s reasonable — combining the mental health complex with the jail expansion and presenting it as one issue for voters unnecessarily puts both projects at risk. Further, while there are some connections between mental health and incarceration, the two projects fulfill distinctly separate community missions and should be treated as such.

Advocates for each project should have the responsibility to make their cases for each project independently of the other. And voters should be given the opportunity to decide separately on the county jail and mental health campus.