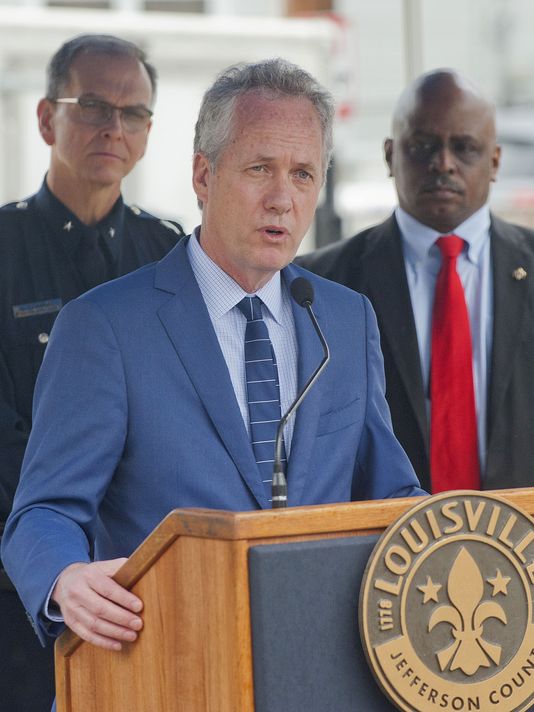 Citizens of Louisville Organized and United Together, or CLOUT, dropped off about 600 postcards signed by its members at Fischer’s office Thursday over the department’s de-escalation tactics, which the group said will protect law enforcement and vulnerable residents alike.

“We have many loved ones and friends in our congregations with mental illnesses and addictions who live in fear of potential encounters with the police,” said the Rev. Reginald Barnes, pastor of Brown Memorial C.M.E. Church, a co-president of CLOUT.

Police body camera footage showed Bowman was holding a screwdriver and was hit with a stun gun before he advanced on the officers, who shot him with their weapons several times. Bowman, who had been homeless at times in his life, was a former patient at Central State Mental Hospital and was off his medication in a prior incident, according to arrest citations.

CLOUT wants Fischer to explain what’s happened since his call last year for police Chief Steve Conrad to take a closer look at how officers respond when dealing with those vulnerable populations.

Barnes led a group of about a dozen CLOUT members to Fischer’s office. But as the group tried to enter, a Fischer spokesman met them at the door — which was locked — and told them that his scheduler was unavailable. He said the group has tried on several occasions to speak with the mayor to no avail.

Fischer has had a tense relationship with CLOUT, which has lobbied the city on several issues, most notably affordable housing, since he first took office.

In 2012, for instance, Courier Journal reported CLOUT leaders said Fischer had “lied” about what his administration was doing to secure a revenue source for the Affordable Housing Trust Fund. Fischer had walked out of a meeting with the group after a heated discussion and suggested the group change its approach, according to the report.

“I definitely think there are many, many times we have been locked out, but it is our hope and prayer the mayor will meet with us to discuss our ideas on the public and police safety,” Barnes said on Thursday.

Fischer was unavailable for comment, but in a statement spokeswoman Jean Porter said the mayor and the police chief believe it is critically important that police work to resolve situations peacefully.

“That is why Louisville Metro Police officers receive crisis intervention training, known as CIT, which last year helped them resolve almost 96 percent of 2,274 CIT situations with no use of force,” she added.

CLOUT said it is holding the mayor accountable for comments he made after prosecutors declined to bring charges against two officers in 2017 for the fatal shooting of Darnell Wicker, a 57-year-old who suffered from hearing loss, according to his family.

At the time, Fischer called on Conrad to “take a close look at the steps that the officers took and did not take.” He added that the chief should “rigorously” evaluate the department’s rules, “including those related to de-escalation and individuals with mental illness or drug abuse problems.”

CLOUT leaders said they met with police officials last year and were disappointed when they learned that Fischer’s call for an evaluation had been just a conversation among the department’s leadership.

“We do not think that should satisfy the mayor’s directive, not to mention the public interest,” Barnes said.

Police spokeswoman Jessie Halladay said the department provided CLOUT with an 80-page report on its de-escalation training in response to Fischer’s request. She said CLOUT members were told that there may have been additional information relayed in conversations as well.

But CLOUT leaders said police told them the document they received was not meant to be in response to the mayor’s directive, according to a group spokesman.

Porter, the mayor’s spokeswoman, said the police department is working to implement a so-called “Integrating Communications, Assessment, and Tactics” model by the end of this year.

National police experts say that model emphasizes giving officers going to a scene the tools, skills and information they need before responding to someone experiencing a mental health or behavioral crisis while armed with something other than a firearm.

“The goal is to give officers more tools to peacefully resolve volatile situations, whenever possible, with people who are in crisis or exhibiting dangerous behavior,” Porter said.

Barnes said CLOUT was disturbed after reviewing the police department’s internal investigations of use of force since 2012. He said that of those 68 cases, none examined whether or not the officers followed the department’s guidelines on how to treat people who are mentally ill or addicted to drugs.

But Halladay, the police spokeswoman, said the records that CLOUT obtained would only show the investigation’s closing letter and don’t dive into whether the department’s de-escalation protocols were examined. She said she doesn’t know how many of the use-of-force cases may have had a de-escalation component because police don’t track those investigations that way.

“Incidents are reviewed within the context of each individual circumstance, which could include (crisis intervention training) or other policies,” Halladay said.

Barnes said CLOUT organizers simply want to ensure that officers are practicing whatever policies are adopted. He said Fischer shouldn’t be unwilling to discuss that with his organization, which represents up to 10,000 members, based on past experiences.

“I think what will satisfy our people is to sit down and discuss these issues in-depth,” Barnes told Courier Journal.