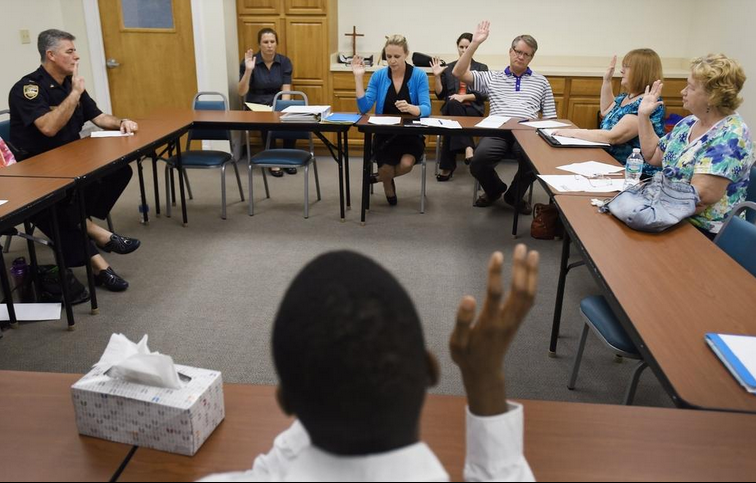 Report: Duval poised to be a state leader in juvenile civil citation use

For years, juvenile justice advocates slammed Duval County for arresting dozens of kids each month who could have avoided court and entanglement in the juvenile justice system altogether if they’d been offered a simple alternative.

But, a new report released Tuesday highlights the upward trend in the last year in that alternative — pre-arrest diversion, also called a civil citation — in the area judicial circuit. The progress followed the signing of a new memorandum of understanding among 22 local agencies, including the State Attorney’s Office of the Fourth Judicial Circuit, the Jacksonville Sheriff’s Office and agencies from Clay and Nassau counties. Now, the report says, Duval County could be among the top-performing counties statewide in 2018.

“Stepping Up: Florida’s Top Juvenile Pre-Arrest Diversion Efforts” is an annual report put forth by the Florida-based Caruthers Institute and supported by advocacy and policy groups that include the American Civil Liberties Union, the Southern Poverty Law Center, The Children’s Campaign and the James Madison Institute.

The fourth annual report uses 2017 civil citation data from Florida’s Department of Juvenile Justice to assess how counties and agencies are performing in terms of helping children to avoid arrest for behaviors that would be classified as misdemeanors, like petty theft, fighting and minor drug and alcohol offenses. The gradual, statewide upward trend in civil citation use coincides with the lowest number of juvenile arrests in 42 years, according to DJJ.

In the first three months of 2018, law enforcement agencies across Duval County issued civil citations instead of making arrests about 90 percent of the time. Previously, Duval had a 27 percent utilization rate in 2016 and 59 percent in 2017, according to the report.

About 52 percent of eligible kids in Clay County got citations in 2017, and 67 percent of Nassau County kids did, too. Both of those counties were covered under the expanded agreement signed last May, and both show, on average, even higher numbers for the first quarter of 2018.

Statewide, 59 percent of eligible kids got civil citations in 2017.

As a result of the increased use in Duval County, the racial disparity — black youths were arrested in 2016 at a rate that was 16 percentage points higher than white youths — was nonexistent for the first quarter of 2018. According to DJJ data, 12 percent of 92 eligible black youths in Duval were arrested in the first three months of this year, compared to 12.5 percent of the 40 eligible white youths.

“It is an excellent example of how high utilization of civil citations can eliminate racial disparity,” said Dewey Caruthers, the report’s author.

Scott McCoy, senior policy counsel of the SPLC in Florida, said experts know diversion programs improve outcomes for youth, and they “want that to be the case regardless of race.”

Mat Nemeth, chief of the patrol support division at the Jacksonville Sheriff’s Office, said internal records show that so far this year 219 out of 225 eligible youths were given citations.

For a time, it was JSO policy to allow the responding officers to decide if a civil citation was appropriate or not, Nemeth said. But, civil citations proved their value to the department — with officers spending less time processing juvenile arrests and better outcomes for kids — and it is now policy that they will be issued with few exceptions, he said. With new policy comes related training and follow-ups to check for compliance, Nemeth said.

“It was very evident that this would be a long-term positive,” he said.

At JSO, civil citations are now “normal, everyday, this is the way we do business now,” he said. “It’s not that the officers were resistant to it; it just wasn’t the way we did it before.”

Arrests are only used if the child declines to participate in a civil citation program, or if the arresting officer and his or her supervisor agree that a civil citation is not appropriate, Nemeth said.

State Attorney Melissa Nelson and the office’s juvenile director, Laura Lothman Lambert, said their office established a “feedback loop” with law enforcement that allows discussion about why cases were or were not handled with civil citations. It allows for letters from kids who received citations to write letters of appreciation to the officers who could have, but did not, arrest them, which in turns helps to instill confidence in the citation process.

Nelson said her office has tracked the issuance rates and talked about the efficacy of the program, but “now we’re finally measuring the success.”

Civil citations are not a traffic tickets that are paid and simply go away. Instead, kids who receive citations are given sanctions, like community service, book reports and counseling. In Duval County, those sanctions are handed down by either Teen Court juries of peers, or neighborhood accountability boards made up of area residents.

Nancy Ricker, co-chair of the civil citations committee for the local Interfaith Coalition for Action, Reconciliation and Empowerment and longtime advocate for the increased use of citations, said she is “absolutely thrilled” with the “phenomenal success” in Duval County.

For years, ICARE was among the most vocal of the local groups pushing for former State Attorney Angela Corey to change her approach to civil citations and allow more kids to receive them. The reforms that ICARE had wanted for did not come to fruition until Corey’s successor, Nelson, took office in 2017 and were made official in May 2017 with the signing of a new policy for the three-county circuit. The results of the report, and the signing of the agreement last year, are for Nelson, a fulfilled campaign promise to discontinue Corey’s citation policy and work with local law enforcement agencies for a more collaborative approach to handling kids who get into trouble with the law.

“It was very depressing at times when we were not making any headway,” Ricker said. “Seeing what’s happened over the last year, it’s just so exciting.”

A new state law that goes into effect Sunday requires all 20 of Florida’s judicial circuits to use civil citations or a comparable pre-arrest diversion program for kids. Statewide, the citations have grown in popularity as a “smart justice” reform that promotes public safety, saves money and improves outcomes for kids.

The most recent 12-month recidivism rate for kids statewide who receive civil citations is 4 percent. Ricker, who serves on neighborhood accountability boards, said 97 percent of the kids who come before them don’t re-offend.