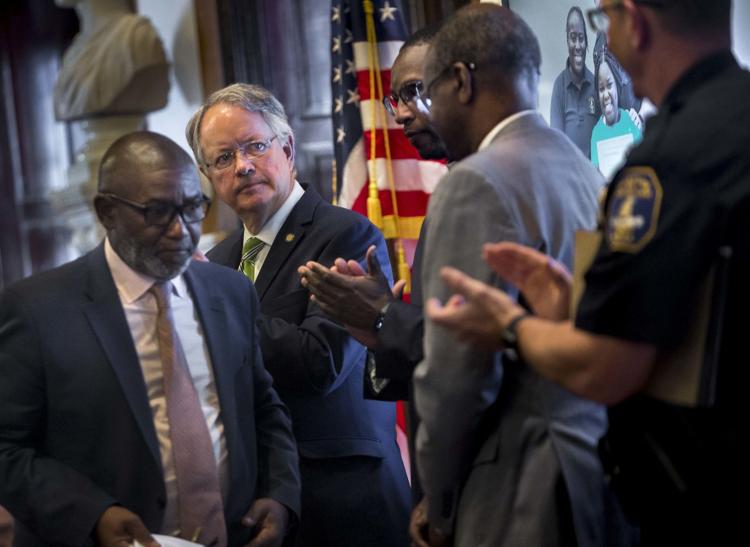 Inside a meeting hall at Ebenezer AME Church on Charleston’s East Side Thursday night, Fouche Sheppard shared a story of how she was pulled over by a police officer she believed had profiled her.

The officer told her he thought she was an African American male before letting her go, she said.

Sheppard’s story was one of a handful shared during the first town hall meeting held as part of an eight-month, $158,556 racial bias audit of the Charleston Police Department by the Virginia-based firm CNA. Although small in attendance, a number of residents from the East Side neighborhood shared personal stories, suggestions on ways to increase community collaboration with police and asked questions about how a police department that seems to have drifted away from true, community-level policing can begin to right the course.

Sheppard wondered how she as an individual could make a difference in reforming a criminal justice system that at times had seemed stacked against her.

“We’re not going to go up as individuals unless we have (support),” she said, responding to a discussion about citizen complaints against officers.

For residents like Eastside Community Development Corporation President Latonya Gamble, the audit is a chance for the city to strive for the ideal of equal justice regardless of race, religion or other background.

“I just want equity,” Gamble said, at the town hall meeting. “Whatever you do for Broad Street I want for the East Side.”

Residents and representatives of CNA say they hope to have better attendance and participation from residents for future town hall meetings. Dates for those future meetings have not yet been set, but when the time comes, organizers plan to partner with neighborhood organizations to host the events and boost attendance.

The organization hopes to release its findings this fall.

The Charleston Area Justice Ministry, a local interfaith group, had pressed the city to hire an independent auditor to identify any racial biases. For several years, the group has advocated for solutions to racially-biased police practices.

Justice Ministry co-president Arthur McFarland, on Thursday, said the start of the audit is “a historic day for a historic city.”

“We hope that as a result of this police audit, that it will signal the beginning of a new day in Charleston as it relates to police-community relations, particularly with the African-American community, which has built this city in more ways than one,” he said, during a press conference about the audit Thursday morning.

Charleston Police Chief Luther Reynolds said at the press conference that his department looks forward to taking specific and meaningful steps toward improving life for all citizens.

“We know we can always do better,” he said.

Mayor John Tecklenburg called the audit a “logical extension” of the Illumination Project’s efforts to build trust between police and the community in the wake of the racially motivated murders of nine black worshipers at Emanuel AME Church. The Illumination Project identified strategies for change following listening sessions on topics such as hidden biases and perspectives on policing.

CNA said its work has led to successful reform in other communities. For example, a representative with the firm said the Las Vegas Metropolitan Police Department improved community trust after it embraced CNA’s recommendation to hold a news conference within 24 hours of every officer-involved shooting.