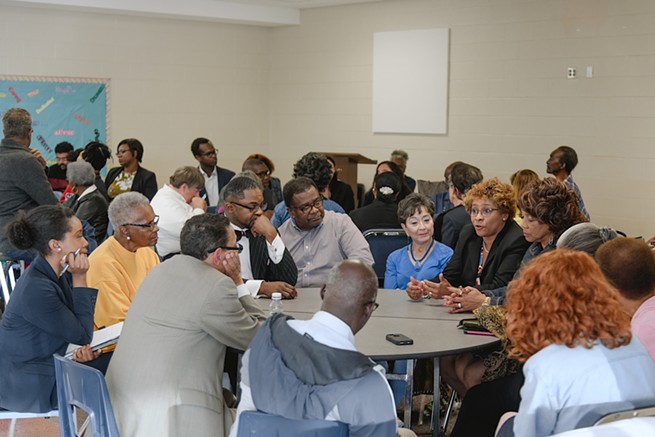 Ann Powell-Cromwell was turning to head home on James Island when an officer stopped her. Her tag lights were out, he said, and he couldn’t see her license plate.

“I felt that he shouldn’t have stopped me because I had my signal on way ahead of time,” Powell-Cromwell said in a classroom at St. James Presbyterian Church on James Island, where close to 70 attendees were separated into small groups to talk about their interactions with Charleston police officers. “It’s a bad area, and I assume he probably thought I was one of them ones that was gonna buy some drugs.”

Powell-Cromwell’s daughter, Sonya Cromwell, had a different experience from the passenger seat.

“He told us to come out the car, he showed us, he allowed us to open up the hood to tell us where the light would be, and he said, ‘Just make sure you go back to the dealership that worked on your car and let them know,’ and he even explained that most of the time it’s a wiring issue because both of them were out,” she said.

“She may have a different history as well,” said Steve Rickman, an analyst who led the roundtable of citizens in discussion, about Sonya’s mom. “She’s a little bit older.”

Residents shared similar stories with auditors from CNA, the Virginia-based firm hired by the city to conduct a racial bias study of the Charleston Police Department, at four community meetings throughout the city last week. Men and women, mostly black and middle-aged or older, spoke of questionable encounters — times when discrimination wasn’t spoken or explicit, but a gut feeling left pedestrians, motorists, or passengers with a sense of anxiety or discontent.

Inspired by Powell-Cromwell, Rickman shared his own experience with this sort of ambivalence. In Silver Spring, Md., he felt picked on during a traffic stop as an “African-American male driving a nice car in a nice neighborhood.”

“But on the other hand, though, I was like, ‘OK,’ because there had been a rash of burglaries in the neighborhood,” he said. “At least somebody’s in here checking!”

Last week’s town halls were the first in a series of interviews with residents and officers to determine whether there is systemic racial bias in local policing and, if so, what can be done about it. Auditors will also analyze the last five years of police data on use-of-force incidents, complaints, traffic stops, recruitment and hiring practices, and community relations.

The research firm visited the Holy City for the first time in February. As part of last week’s site visit, the team spoke to 64 police officers. A final report will be presented to Mayor John Tecklenburg in September, according to senior research scientist Denise Rodriguez.

“What the findings will be, I have absolutely no idea,” said Councilman William Dudley Gregorie, who sat in on a town hall in his district at Burke High School. “But I did want to make sure that the data that was looked at was for a long period of time, so we can determine whether or not there were any trends.”

The audit is the result of a years-long struggle between local activists, who wanted an independent firm for the study, and the city and Mayor Tecklenburg, who stood by an original city-wide efficiency audit by Novak Consulting. Activists argued that Novak had little experience in racial bias studies. City Council eventually agreed to an independent police audit in November 2017, with Council approving CNA’s $159,000 contract in December of last year.

CAJM was instrumental in getting the audit approved. The interfaith social justice group made racial bias in policing its lead issue for 2016 and 2017. Last year, they helped draft the document outlining expectations for CNA’s research.

At last week’s meetings, some attendees faithfully described themselves as members of CAJM before sharing their stories.

Brandon Chapman, a member of CAJM who graduated from the College of Charleston in 2016, said he was stopped by a police officer on his way to the school library late one night.

Though he was wearing a CofC hoodie and a backpack, an officer approached him and asked, “What are you doing in this area?”

He told him that he was headed to the library to finish a paper.

“And he said to me, ‘Well, you know, I just stopped you because there’s been some burglaries in the area and I just wanted to make sure you were supposed to be in this area,'” Chapman recalled. “When I talk to friends who look like me, they either have had the same experience or know someone who’s had that experience, but when I talk to my friends that are white … my college roommate who was white told me he’s never been stopped by Charleston police.”

A common theme among older, black participants was the idea of “the talk” — not the “birds and the bees” speech expected from parents, but advice about what to do during a police encounter to ensure that their children walk away unharmed.

“My experience driving as a white man is very different, and I never really contemplated that until I heard these stories,” said Councilman Gary White, who announced his run for mayor in March. “The thing I heard was ‘the talk,’ well ‘the talk’ in my house was different. I have three children who drive and I never even contemplated the idea of the talk.”