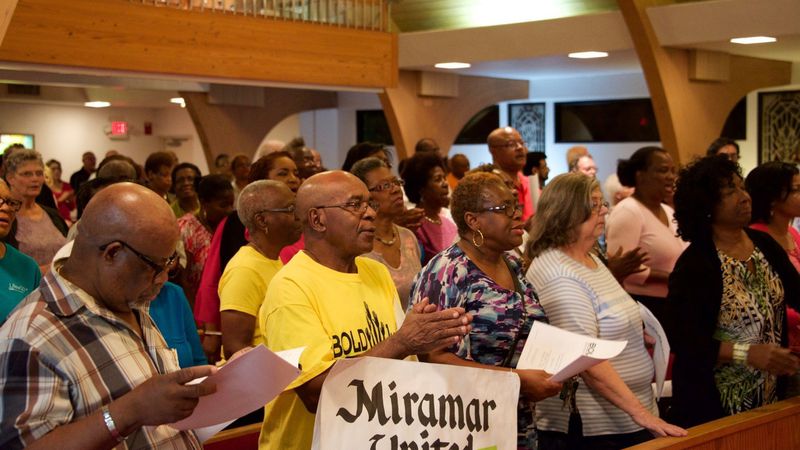 They work behind the scenes trying to fix what’s wrong in the community.

They are BOLD Justice, or Broward Organized Leaders Doing Justice, an interfaith organization comprised of 23 congregations throughout Broward County.

The group is hosting a free event April 8 expected to draw more than 1,200 people, including Broward Sheriff Gregory Tony.

The annual gatherings began 12 years ago.

This year, BOLD Justice plans to target two issues: Preventing senior abuse in nursing homes and helping keep those with mental illnesses out of the criminal justice system.

During the event, the group’s leaders plan to offer ideas to local officials that might help address those two social issues.

“We gather together in the fall and have a conversation about what the community needs,” said the Rev. Kennedy McGowan, pastor at the First Presbyterian Church of Hollywood. “Our congregation became involved four years ago.”

One year, the organization worked with Broward County officials to help get 2,000 apartments built that qualify as affordable housing.

BOLD Justice turned its attention to the care of seniors in nursing homes two years ago, McGowan said.

“We heard horrible stories about people who were actually dying in assisted living facilities and nursing homes,” he said.

Then, in September 2017, Hurricane Irma swept through town, knocking out power to a nursing home in Hollywood.

The temperature inside the Rehabilitation Center at Hollywood Hills climbed to 99 degrees, leading to the deaths of 12 people.

The tragic incident hit home with McGowan, he said.

His own church had three members in the Hollywood Hills nursing home when the hurricane hit. They were lucky to survive, he said.

“These were people I knew and people whose families trusted that nursing home to take care of their loved ones,” he said. “I met some of the families whose loved ones died there. They were heartbroken.”

“Unless the authorities get involved,” he said, “something like Hollywood Hills could very well happen again.”