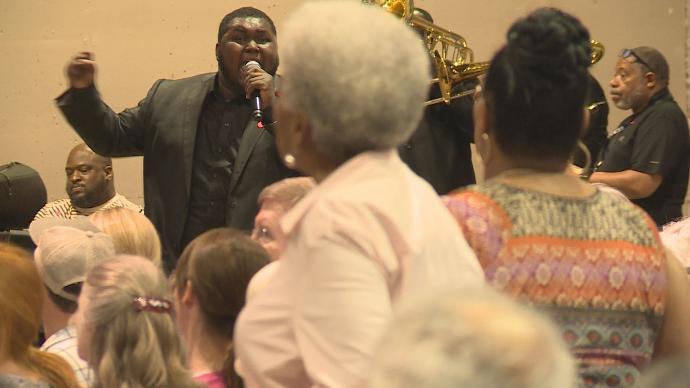 LEXINGTON, Ky. (WKYT) – More than 2,000 people met in downtown Lexington as part of B.U.I.L.D.’S 2019 ‘Nehemiah Action Assembly’. B.U.I.L.D. stands for ‘Building a United Interfaith Lexington through Direct action’. The group is made up of 26 different congregations.

A goal of their annual meeting is to urge leaders to take action on several issues they say they are seeing in their community.

The topics discussed include drug addiction, the rates of students suspended in Fayette County Public Schools, and violent crimes.

The city has already seen ten homicides this year. It’s coming off a year where police did investigate a lower number of homicides than other recent years. However, those at the meeting say the city can and must do better.

Rev. Joseph Owens has presided over funeral services for many murder victims, “It is quite painful to deal with family after family. They look at you and say, Pastor what can we do?”

He doesn’t just feel the impact of violence through helping the families, but also from seeing Shiloh Baptist Church caught in the middle of gunfire on Christmas Day.

“You think church is one of the places you are going to be safe.”

Bullets flying across the sidewalk the Pastor was on less than ten minutes before the shooting. It is scenes like that one that they say are plaguing their community.

“I’m angry at the fact that I have to pay to park when I should be able to walk to work. But because I don’t feel safe I pay to park to work at the University of Kentucky,” explains Cheryl Birch.

Birch is someone all to familar with the impact of shootings.

She says she is “sick and tired of being sick and tired” of hearing about another shooting in her neighborhood.

B.U.I.L.D. pushing for the city to work with The National Network for Safe Communities (NNSC) and implement their Group Violence Intervention strategy. It is something they got a commitment for from former Mayor Jim Gray back in 2018. Since then NNSC did a site visit and completed a report determining if there is group-involved violent crime in Lexington. B.U.I.L.D. says they are still waiting for those results to be released.

Mayor Linda Gorton was not able to be at the meeting but Public Safety Commissioner Ken Armstrong was there on her behalf. Commissioner Armstrong saying Mayor Gorton will meet with a delegation to discuss this initiative in the coming weeks.

The Mayor also wrote a letter to B.U.I.L.D. members. That letter reading in part, “The city hears a wide variety of opinions about how to improve public safety. Even though we all recognize that even one homicide is one too many, we must also realize that there are good things going on. Violent crime is down. We are working hard to make sure that trend continues, involving an unprecedented number of partners from all over the city..”

Those at the meeting say they do appreciate everything the city and police are doing. They say while they know they can’t get rid of violent crimes entirely they do hope to see a reduction specifically in the high risk areas.

“We don’t know which family will be impacted next…nine years ago it was me,” says Birch.