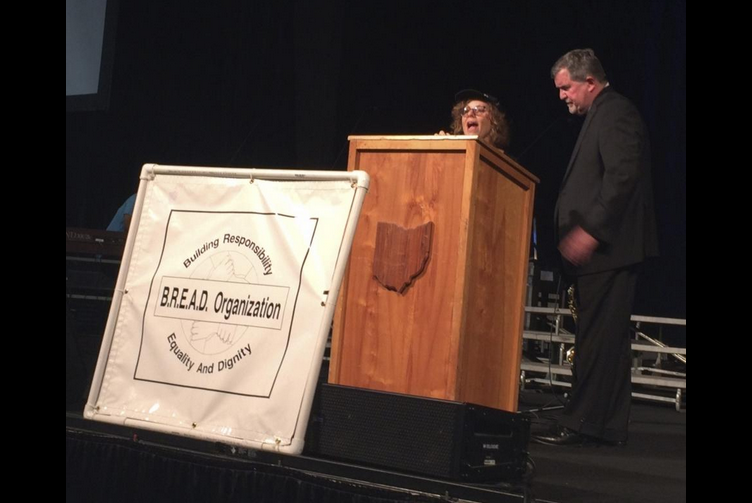 Ali Miller is an AmeriCorps VISTA worker who spends half of her paycheck on housing here in Columbus.

The job doesn’t pay much, she said — about $12,000 a year. That gives her no money for a car, or alcohol. She gets no money from her parents.

And a local social justice group says there are thousands more like Miller who can’t pay the escalating rents in a growing Columbus and central Ohio.

“We want affordable housing too,” said Miller, not new places with $1,000-a-month rents with granite countertops and fancy exercise rooms.

According to the Affordable Housing Alliance of Central Ohio, 54,000 area households live in or near poverty and and are paying more than half their income for housing.

The interfaith group BREAD — Building Responsibility, Equality and Dignity — held its 22nd Nehemiah Action event on Monday targeting various issues and possible ways to address them. Speakers at the event, which attracted about 3,000 to the Celeste Center at the Ohio State Fairgrounds, discussed not only the housing crisis facing the community but also keeping children out of the school-to-prison pipeline, ways to connect seniors to services, and the need for a municipal identification card for poor people and others who have trouble obtaining ID.

BREAD also wants Franklin County commissioners to boost its conveyance fee — a property transfer fee — from $2 for every $1,000 value of property sold or transferred to $4; the trust currently receives about $3.5 million a year from the fee. Commissioners in February said they are considering increasing the fee toward part of a larger affordable housing initiative.

“We know it’s a problem that needs huge investment,” said the Rev. Tim Ahrens of the First Congregational Church Downtown. “We need a champion in the county commissioners and the city.”

“It really is a crisis,” said the Rev. Charles Leister of the New Beginning Christian Center on the East Side, a BREAD co-president.

The city’s bond package, which Columbus voters will see at the polls on Tuesday, targets $50 million for affordable housing and neighborhood development.