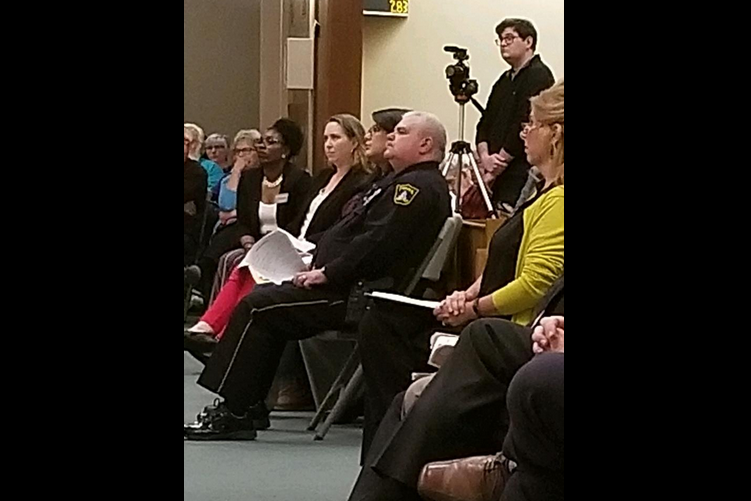 Chicago police warned gang member Daniel Alcantara in the summer of 2015 that he was at high risk of killing someone or being killed, and offered him help leaving the gang life, according to the Chicago Tribune.

But Alcantara declined, and was fatally shot during a gang war in June 2016, that newspaper reported the following month.

The warning given to Alcantara was part of Chicago’s use of a “group violence reduction strategy” of the type pioneered by the National Network For Safe Communities, a carrot-and-stick approach that Topeka police Chief Bill Cochran intends to pursue in this community.

Appearing before more than 1,200 people Monday at Most Pure Heart Catholic Church in a meeting of the faith-based organization Topeka JUMP, Cochran agreed to implement a group violence reduction strategy.

According to the National Network For Safe Communities, such strategies emerged in the 1990s and have been put in place in dozens of cities. Those include Boston, which saw a 63 percent reduction in youth homicides after its strategy was implemented, and New Orleans, which saw a 32 percent decrease in group member-involved homicides.

Group violence reduction strategies operate on the premise that crime can be dramatically reduced when law enforcement, community members and social service providers team up to directly engage members of violent street groups.

“The heart of the Chicago Violence Reduction Strategy is to arrange for police to personally visit gang members they consider to be at high risk of being a shooter or a victim,” CBS News reported last year.

The website for the police department in South Bend, Ind., which maintains a group violence reduction strategy, says homicides and shootings tend to be committed by members of street groups that are mostly “gangs, drug crews and the like.”

“All gangs are groups, but not all groups are gangs,” the site says.

It suggests that cities that focus on gangs — which are often understood to include such things as organization and leadership — may exclude a significant number of other groups that contribute heavily to serious violence, such as loosely affiliated neighborhood drug crews.

At call-ins, the site says, partners tell group members that:

• The community needs them alive, out of prison and with their loved ones.

• The violence is morally wrong and has to stop.

• Police will meet any future violence with clear, predictable and certain consequences.

• Help is available to all who accept it with such things as finding jobs and leaving the gang life.

• Reducing peer dynamics in the group that promote violence by creating collective accountability.

• Providing a supported path for those who wish to change.