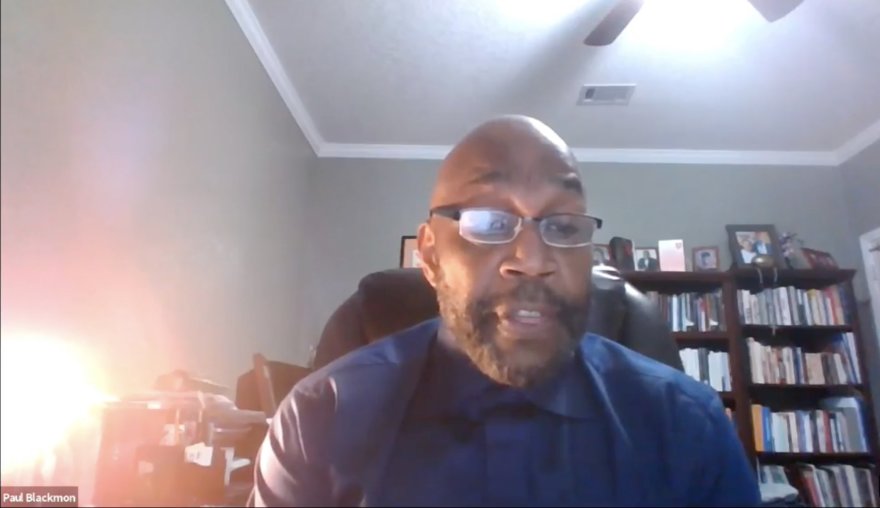 The faith-based organization JUST Pensacola has renewed its call for increased use of the Civil Citation program to reduce juvenile arrests in Escambia County.

For the second year in a row, hundreds of community members from a coalition of Pensacola-area congregations assembled to urge local leaders to take action regarding the high number of youth arrests. The meeting was held Monday via Zoom.

Rev. Dr. Rick Branch, minister of music at First United Methodist Church and member of the JUST Pensacola executive committee, says they picked up where the inaugural event left off.

“We had already been in conversation with the state attorney-elect and the sheriff-elect and had them in last year’s Nehemiah Action Assembly,” said Branch. “So, this was just a continuation of that conversation now that they are now actually leading their agencies.”

Branch says in the short time since Ginger Bowden Madden took over as state attorney for the First Judicial Circuit and Chip Simmons took the helm as Escambia County sheriff, there’s reason to be encouraged about future use of the local civil citation program as an alternative to arrest.

“For everyone, it’s obvious that the new leadership that came in during January, has made a difference, because February’s numbers are a very significant increase.”

For example, there were 17 civil citations issued in Escambia in February of this year, about one third of the 56 total for the entire 12-month period dating back to March 2020.

“In 2020, according to the State Department of Juvenile Justice, Escambia County arrested more than double the state average for youth arrests,” Holder said.

Data also show Escambia County’s civil citation issuance rate for 2020 was 28%, less than half the state average of 53%.

“It’s unacceptable that out of all the juvenile arrests we make each year, 50% are black children, even though they only make up about a third of the population,” Holder added.

Referencing his own personal experience of losing a job because of a youthful indiscretion, Holder says minors who are arrested can become branded for life.

“Arrest records make it hard for you to get jobs, get college scholarships, and even get into the military,” he said, dispelling the belief that arrest records of juveniles automatically get expunged. “Future employers can still see an arrest on a Level 2 background check. With today’s modern technology, nothing ever truly can be erased once it’s put into a computer system.”

After months of conversations and research to identify areas of focus, the congregations assemble to seek specific, attainable actions.

“We have a few questions that we would like to ask you, if you would permit us to,” began Rev. Paul Blackmon, pastor of First Baptist Church of Ferry Pass and co-president of JUST Pensacola, addressing State Attorney Madden.

His first request focused on expanding Escambia County’s more limited program to mirror the state program that makes all juvenile misdemeanors eligible for a civil citation, except for those involving sexual offenses, gang activity and guns.

“Will you develop a new memorandum of understanding that includes the language of the state statute for Escambia County’s Civil Citation program,” he asked.

“Yes, for the most part,” responded Madden.

She agreed to widen the number of misdemeanors that qualify for civil citations in Escambia County; currently, that number is 18.

However, she also plans to propose additional exceptions, including animal cruelty offenses and those involving dating/domestic violence.

“In addition to the three that are set out by statute, I believe those two offenses are not appropriate for civil citation, because the behavior in and of itself suggests a more serious root cause that is going to require more than a 30-120 day supervision or treatment period,” she explained.

Madden also was asked to meet with all of the stakeholders prior to July 30 to sign a new Memorandum of Understanding regarding Escambia’s civil citation program.

“There hasn’t been a new one in several years; they haven’t really reviewed it or changed it in several years,” said Branch, noting that Madden agreed to call the meeting in order to add those extra misdemeanors that qualify.

Escambia County plans to follow the state’s lead and increase the number of civil citations that eligible youth can be issued.

Further, the state attorney agreed to review Escambia County’s screening process ahead of filing a case with the clerk of courts, and Madden has agreed to look into JUST Pensacola’s request to create a civil citation program for adults.

Sheriff Chip Simmons plans to participate in researching the feasibility of a program for adults and has recommitted to an 80% civil citation usage for juveniles.

Overall, Branch says the congregation members that make up JUST Pensacola are pleased with the progress, “We also believe it is our duty to hold them accountable to show a mirror to them next year to say, “Yes, you have accomplished this” or “No, we need to try harder on this.”

While JUST Pensacola pushes ahead on the civil citation issue, the group next plan to address the issue of affordable housing.