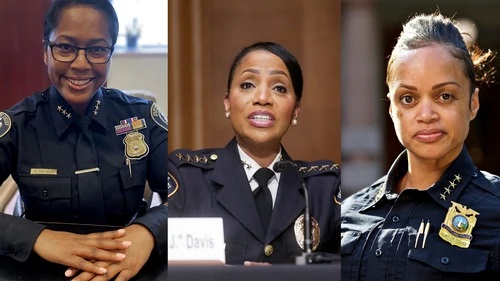 Do Black Women Have to Save the Police, Too?

Embattled police departments around the country are hiring Black women as their police chiefs or commissioners in an effort to kickstart reforms.

When 48-year-old Elaine Bryant received the call from the mayor of Columbus, Ohio, on June 1 telling her she’d be the city’s next police chief, she was elated. But she also recognized the immense challenges she’d face as a Black woman in a field dominated by white men.

On top of that, she’d have to lead a department responsible for the recent high-profile deaths of two unarmed Black Americans. When a Columbus police officer shot and killed Andre Hill in December, he was only holding a cell phone. Four months later, 16-year-old Ma’Khia Bryant died at the hands of police during a family altercation, the same day in April when Derek Chauvin was convicted of murdering George Floyd.

Last year, Columbus, the state capital, ranked 14th nationally for the number of police-involved shootings, according to the Washington Post.

“We all know that it’s a male-dominated field, but we absolutely have our place in this field too,” said Bryant, who’d been with the Detroit Police Department for 21 years before coming to Columbus. “Women bring something to law enforcement that was not necessarily brought before. We have compassion, we have empathy, we have some insight that I think can absolutely lend to the way policing should be geared.”

Bryant isn’t alone in the crucial task ahead of her. After navigating their own instances of brutality or racism, several embattled police departments around the country—including Louisville, Philadelphia, and Memphis—have chosen Black women as their highest-ranking officer. Black women are already leading the charge to end violence against Black Americans and demand racial equity. Now, they’re being tapped to reform the very institutions that contribute to those problems.

Of the five women leading a police department in one of the nation’s 30 most populous cities, four of them are Black. Many police reform advocates have celebrated that shift in power, based on the belief that women, especially minorities, are better positioned to understand and address racial police violence. But Black female police chiefs and commissioners still face an uphill battle for acceptance from their peers and the respect of communities during an era of intense scrutiny on law enforcement.

“Many of us are moms, we’re caregivers, we’re nurturers,” said Cheryl Dorsey, a retired, 20-year veteran of the Los Angeles Police Department who now works as an advocate against racial and social injustice in policing. “As Black women and as Black mothers, we’re uniquely and acutely sensitive to the issues of a community as it relates to everything that we see going on right now across the nation.”

Those shared experiences may help explain why women officers, regardless of race, shoot suspects less frequently. Only 11 percent of female cops have ever fired their weapon, compared to 30 percent of their male counterparts, according to a 2017 Pew Research study.

But Black women still make up a disproportionately small slice of policing: As of 2021, they comprise just 3 percent of full-time officers in the U.S., according to the Bureau of Justice Statistics.

Although it’s hard to say whether police-involved shootings have increased over the last decade, they have stirred more-fervent responses from fed-up Americans and police reform advocates. And more departments, particularly those known to have fraught relationships with their communities, have hired Black women to address those concerns.

Last year, during the fallout from Breonna Taylor’s death during a botched drug raid in Louisville, city leadership looked to Yvette Gentry to take over the job of interim chief of police to help bring about quick, yet substantial, change to the department and to quell tensions between the community and police. During her short tenure, she fired the cop responsible for falsely claiming he verified the warrant that led to the deadly police raid.

In 2018, Carmen Best, was hired to lead Seattle’s police department by the city’s first openly lesbian mayor. Just six years prior, the city, which is one of the nation’s whitest, was the subject of federal oversight for its ongoing history of biased policing and use of force.

Portland, Oregon, Mayor Ted Wheeler appointed Danielle Outlaw, a Black woman, as chief of police back in 2017 while the department was under scrutiny over its use of force against people with mental health struggles. That year alone, the city’s police force killed two people experiencing a mental health crisis, 17-year-old Quanice Hayes and 24-year-old Terrell Johnson.

Also in 2017, North Carolina made history when it swore in the state’s sixth Black female police chief at the time.

In fact, Black women have gained more power in the field nearly every year, according to Dr. David Thomas, a retired detective and forensic studies professor at Florida Gulf Coast University.

“There are two types of chiefs: There are the change agents, and others who are there to pick up where the old chief left off,” he said. “Black women bring a very particular skill set that should be very beneficial to any organization, because there’s no doubt that they’re not looking at policing through the same lens of those who came before.”

But lack of representation is one of the key shortcomings holding back police departments, according to Dorsey. When Black women do manage to overcome discrimination and sexism and land leadership positions, they often face the same challenges while trying to institute change.

“It’s an important role for Black people to see folks who look like them in these police departments, and for those folks to be in a position of leadership and authority,” she said. “Realistically, because it’s still a good old boy system, Black women who are placed in these positions don’t often get the support that they need to be successful.”

For Bryant, these obstacles will be no different. During her interview with VICE News, she listed a variety of issues she’s hoping to tackle right from the beginning: addressing the department’s lack of diversity, rebuilding its relationship with the community, and taking better care of the city’s youth, all while addressing rising crime in a more productive way.

“I’m excited about bringing the community on board and getting their perspective on what they expect,” she said. “We want them to be a part of the change as well, but making sure that we are looking at it from a socioeconomic standpoint, too, because you can’t arrest your way out of crime.”

Bryant has already teed up some reforms. Shortly after accepting the position as chief of police, the city announced that her former colleague, LaShanna Potts, who’s also a Black woman from the Detroit Police Department, would join the Columbus PD as assistant chief.

And so far, Bryant’s assignment to lead the department has been met with cautious optimism from local police reform organizations like the Building Responsibility Equality and Dignity Organization, or B.R.E.A.D.

B.R.E.A.D. co-president James Wynn told VICE News it was one of several local organizations to submit interview questions to the mayor’s office during the city’s search for its next chief. According to Wynn, the Columbus Police Department has had issues with representation. Despite 29 percent of Columbus’ population being Black, just 10 percent of the department’s 1,800 officers are Black, according to Wynn.

“We have community members that have some fear of even calling the police for assistance,” Wynn said “There’s a level of fear because they don’t want them or their family members to become victims in a high-stress situation.”

The phenomenon isn’t exclusive to Columbus. In the aftermath of George Floyd’s murder, people in North Carolina and New Jersey told VICE News they, too, didn’t call the police in fear of what might happen to themselves or minorities.

While more Black women are getting their shot to become leaders in policing, keeping them in those positions has proven difficult. Best, who retired from law enforcement altogether in 2020, said she felt “destined to fail” after city leadership left her out of conversations of how to reform and defund policing in the aftermath of Floyd’s death. Tanya Chapman, who was the first Black female police chief in Virginia, publicly said in 2019 that she was forced to resign after three years when she tried to change the culture of the Portsmouth Police Department.

Wynn said while Columbus has started to embrace Bryant, her relationship with law enforcement and the community going sour is among his major concerns.

“I hope she’s able to overcome any resistance within the force or even the union,” he said. “Doesn’t matter who it is, the new chief needs the support of the union because those guys have a lot of power.”

But so far, Bryant appears to be on the right track. Earlier this month, she personally met with some of B.R.E.A.D.’s representatives and left the meeting with a sense that she understood the plight of Columbus’ Black community.

“She’s very personable and a great listener,” Wynn said. “Her first few weeks on the job, all she is going to do is gather information regarding the force, the community, so she can assess where we are. And at that point, after she’s gathered all the facts together, she will start to make some changes. I love that approach that she’s taking.”