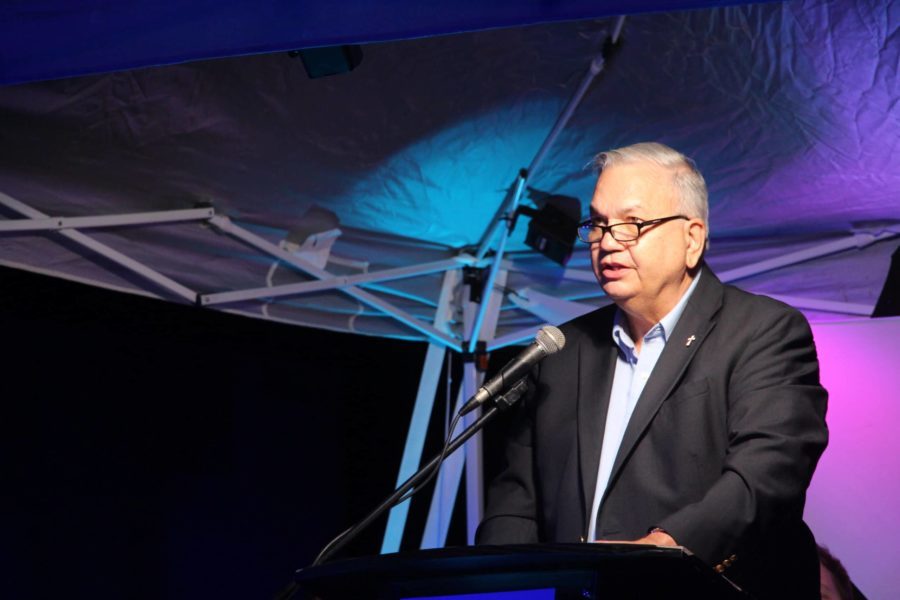 FAST, or Faith and Action for Strength Together, is a grassroots alliance of 44 area religious organizations. The widely diverse group includes two Synagogues, several African Methodist Episcopal (AME) Churches, Unitarians and a variety of denominations across the Christian faith.

Together, they work to tackle community problems and ascertain issues most important to their congregations through hundreds of small group listening sessions held around the county. According to Deacon Paul Koppie of St. Michael the Archangel Catholic Church, the combined membership is in the tens of thousands.

“When we’re talking about justice, we’re really talking about what human beings need to live a decent life,” she said. “So, that pretty much cuts across the board.”

The meetings are open to the public and draw large crowds from across the county. Koppie said before the pandemic, a Nehemiah Action meeting drew 3,500 people to Tropicana Field. Due to lingering pandemic concerns, this year’s event is outdoors.

After hearing hundreds of personal stories and gathering members’ thoughts through the smaller listening sessions, Brinsko said this year’s Nehemiah action focuses on three local issues narrowed down from a list of 15 to 20: affordable housing, water quality and flooding and pre-arrest diversion programs for adults.

“It totally depends on how our membership votes,” said Brinsko. “And then we address it for as long as it takes.”

Once the year’s issues are selected, FAST’s staff spends the rest of the fall and winter conducting research. Brinsko said they interview experts in the corresponding fields and talk to any officials with authority over the problem they hope to address. Organizers then bring their findings and concerns to elected leaders in a public forum – the Nehemiah Action.

The annual event draws its name from the biblical story of Nehemia. While in Jerusalem, Nehemiah witnessed the economic exploitation of the city’s residents by public officials. As a cupbearer to the king, Nehemiah was a powerful man but realized it would take more than one person to effectuate systemic change. Instead, he called a “great assembly,” and the entire community managed to pressure the public officials into returning their land, crops and children.

“We make these proposals to them (elected officials) based upon our research,” said Brinsko. “And then we follow up with them later to make sure that whatever they said they would do, they do it.”

“These are citizens of the county – they deserve direct answers from the people they elected.”

Brinsko said the organization achieved many of its goals since she became a member in 2005. Some of the issues have taken years to resolve, but she said they continue working on them until some level of success is reached.

Koppie said each research committee poses specific questions to the politicians, and FAST provides the local leaders with questions before the event. Brinsko said several community members also provide personal testimonies to illustrate how the issue impacts the average resident.

“And those are extremely powerful,” she said. “Because it moves you to hear how people have suffered because of the injustices that exist.”