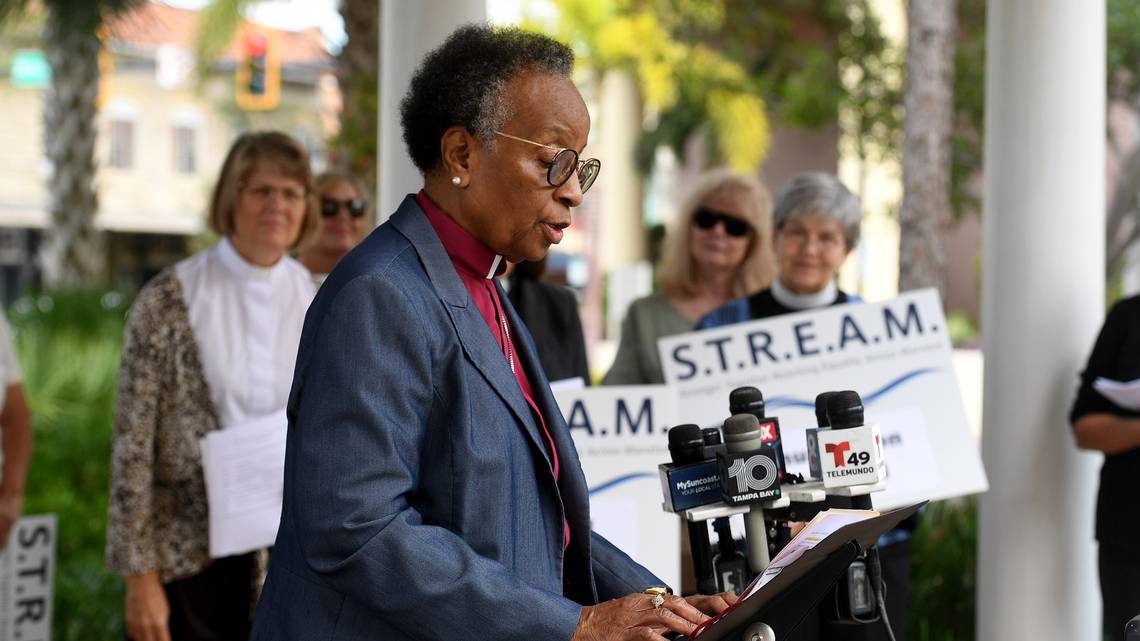 They brought over a dozen churches together to make change in Bradenton. Here’s how

With key commitments from local leaders, it’s been a victorious year for a religious group that came together with the goal of resolving systemic issues in Manatee County.

Stronger Together Reaching Equality Across Manatee (STREAM) made its voice known in 2022, rallying several times over the course of the year to push for more affordable housing and better criminal justice policies. The group, which is made up of more than a dozen local churches and their congregations, has brought hundreds of residents together with a common goal.

“You either have money or you have people power. We don’t have lots of money. We’re little churches. We organize people to get justice in the community,” said Glen Graczyk, a pastor at St. Mary’s Episcopal Church in Palmetto and a co-chair of STREAM.

The coalition’s origin dates back to 2019 when local pastors first began kicking the idea around. STREAM was formed with minimal assistance from the Direct Action & Research Training (DART) Center, a national organization that connects clergy to tackle local issues.

However, STREAM’s priorities are a direct result of concerns from each of its 15 church congregations. After a slight delay caused by the COVID-19 pandemic, the organization hosted community meetings throughout 2021 to hear from residents about the issues most important to them.

The priority was clear: Churchgoers are struggling to afford places to live and they’re worried about the lasting impact caused by misdemeanor crimes on an arrest record.

Throughout 2022, STREAM pushed for — and won — some of the policy changes that alleviate the systemic issues worrying its members. In the process, the group has caught the attention of Manatee County’s top politicians.

“I think they’ll get stuff done,” Manatee County Commissioner George Kruse said earlier this year after attending a STREAM event. “They’ll be a force to be reckoned with.”

WHAT HAS STREAM ACCOMPLISHED?

A year of large gatherings and promises from local leaders to seek policy changes are proof that there’s power in bringing people together, STREAM organizers say. If the squeaky wheel gets the grease, then more than a dozen churches are capable of creating a wave of momentum.

Church leaders declared the need for 500 new affordable housing units every year and a pre-arrest diversion program that would keep minor crimes off an arrest record. STREAM applauded local politicians who were willing to pursue those goals, but they also plan to hold them accountable.

“At our Nehemiah Action in 2022, STREAM won commitments from our sheriff and state attorney to create a new civil citation program in Manatee to avoid unnecessary arrests for first-time misdemeanors,” wrote in a website update. “Our current work is following up to ensure they follow through on their commitments.”

Speaking with the Bradenton Herald, Pastor Joreatha Capers said it’s difficult to overstate just how powerful it felt to have everyday residents come together to push for change.

“When I looked at the people gathered, I saw the kingdom of God on earth. We are concerned about what’s hurting our brothers and sisters,” Capers recalled. “It was a great beginning step. I was torn between wanting to cry and wanting to shout.”

In the months since the Nehemiah Action event, Manatee County officials have announced a policy change that prioritizes affordable housing for lower-income families, and Manatee County Sheriff Rick Wells said he is in the process of training deputies on a pre-arrest diversion program.

Capers, a longtime activist in the Bradenton area, is also credited with much of the legwork that brought 15 different churches under one umbrella.

Several pastors interviewed by the Bradenton Herald recounted the early stages of STREAM’s formation. Each described Capers as an inspiring, persistent force who they were happy to rally around.

“I would give her the credit,” said Rev. Edward Barthell, of St. Stephen African Methodist Episcopal Church in Bradenton. “She looked right in your eyes, smiling and being so sweet, but she presented the idea with persistence. That’s what you have to have to get any group together.”

“It is very obvious that her soul is inspired to help people from the grassroots, so it’s catchy. It’s an enthusiasm for justice that just does not have an end,” added Pastor Bobbie Blackburn, of Trinity Lutheran Church in Bradenton. “She is persistent, not in an annoying way, but in a ‘I’m not going to give up,’ way. She’s got the fire. That’s all I can say.”

Together with Rev. Lawrence Livingston, founder of Eternity Temple First Born Church in Palmetto, Capers brought clergy leaders together to demand a joint justice ministry. In a matter of months, STREAM had created a diverse coalition of churches from Anna Maria Island to Palmetto to Lakewood Ranch.

STREAM shows no signs of slowing down in 2023. Earlier this month, the group hosted a Community Action Assembly to determine which issues will be addressed in the new year.

“We’ll continue to hold their feet to the fire,” Blackburn said.

Once those goals are accomplished, STREAM will return to the drawing board to figure out which issues to tackle next. Based on previous conversations with churchgoers, leaders say pushing for more mental health resources could be a future initiative.

“While some would say Jesus has a proclivity for the poor, I think it’s more than that,” Blackburn continued. “When we follow him, we also face our hearts to those in need, and STREAM is an excellent vehicle for making that happen.”

Visit www.StreamManatee.org for more information about the organization and how to get involved.