Monday evening, the majority of the seats in lower level of the St. Paul’s Baptist Church sanctuary were full at the Great Nehemiah Action Assembly, which was set on tackling education issues in Henrico County and joblessness in the region. 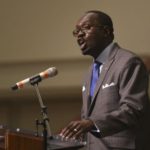 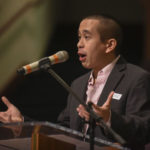 The goals of the meeting, consisting of members of 17 congregations across the region, were to implement a pilot program in hopes of boosting literacy rates in Henrico’s schools and a job training and placement program through the area’s hospital systems.

RISC, Richmonders Involved to Strengthen our Communities, organized the meeting. The group, which touts work since 2002, is one of two entities in the state organized with the aid of Florida-based Direct Action Research and Training Center, or DART.

Issues RISC has tackled include truancy rates in Richmond schools, access to primary health care for the uninsured, and the shortage of affordable housing in the region.

Stakeholders in the issues addressed Monday were called up to the stage to commit to the ideas RISC proposed. Upon agreeing to commit, the representatives were met with thunderous applause. Answers in the negative were met with silence.

Hundreds of jobs go unfilled each year in the hospital systems, RISC said, and many job-seekers live in the East End, said Michael Kolbe of RISC’s jobs committee.

RISC proposed creating a training program sponsored by the health systems that would lead to entry-level jobs in those hospitals.

“Imagine a ladder out of poverty,” Kolbe said. “We want leadership from HCA and VCU Health to finish building this ladder.”

Representatives of VCU Health, Church Hill Activities and Tutoring (CHAT) and HCA Healthcare agreed to create a coalition to help create a pool of candidates to fill those jobs.

“(We have) endless possibilities when there are people are motivated and they want to try new things and explore,” said Maria Curran, chief human resources officer and vice president for human resources and community benefit at VCU Health System.

Direct instruction, a form of teaching that introduces skills through scripted lectures and students grouped by their level of learning, is being used successfully in some charter schools in Baltimore, a representative of the program said earlier in the spring.

As the format is not fully compatible with the state’s Standards of Learning, the RISC proposal would stop at second grade.

According to the Virginia Department of Education, 16 Henrico elementary schools missed the mark for state SOL test scores. The current English pass rate on the path to full accreditation is 75 percent.

School Board member Roscoe D. Cooper, the only board member in attendance, agreed to travel to Baltimore in October with RISC members to observe direct instruction and, based on the outcome of that trip, support allocating resources for elementary schools that would like to try direct instruction.

“We are not going away,” she said. “It will be our persistence and the power of our numbers that will persuade the powers that be to pay attention to the cries of our children.”