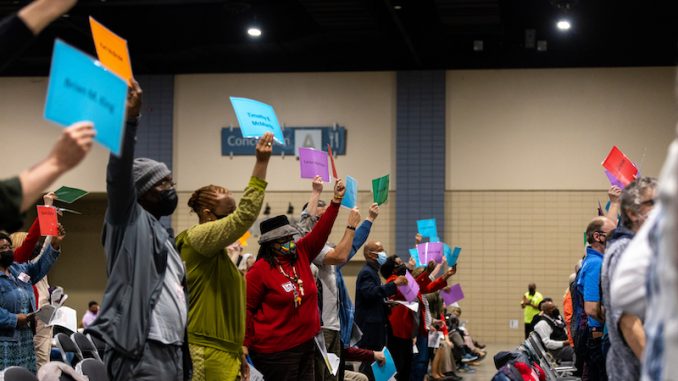 By Katrina Lee, The Commonwealth Times

Around 2,000 people gathered in-person and over Zoom for the Richmonders Involved to Strengthen our Communities’ annual Nehemiah Action event.

The event, hosted at the Greater Richmond Convention Center on Tuesday, called on public officials to discuss social issues with a focus on gun violence in the city.

“Our community is hurting, we are hurting because our people are being gunned down in the streets,” Pastor Ciarra Smith-Bond said at the event. “If one of us hurts, all of us hurt.”

RISC is an organization dedicated to holding public officials accountable for solving Richmond’s critical problems, according to the organization’s website. The organization has focused on the issue of gun violence because of the Richmond community’s concern over the issue.

Smith-Bond addressed the crowd on Tuesday, asking them to “suffer through” the uncomfortableness the discussion may cause for those who have been victims of gun violence.

Homicides involving firearms in Richmond increased from 61 in 2020 to 76 in 2021, according to the Richmond Police Department Website. The crowd took a moment of silence during the event to stand with cards with the names of the victims who had died from gun violence in Richmond.

RISC has tried to meet with Richmond Mayor Levar Stoney since he was reelected to discuss the organization’s proposed gun violence solution called “Group Violence Intervention,” or GVI, according to a press release from the organization.

James Nolan, press secretary for the mayor’s office, stated in an email the mayor has proposed a multitude of prevention efforts, including funding towards community-based organizations, the hiring of a community safety coordinator plus three “Violence Interrupters” and a gun buyback program.

Nolan stated the mayor decided not to use GVI as part of his proposed gun violence solution, as it is a “law enforcement-heavy approach” that “lacks causal evidence.”

“RISC advocated full implementation [of GVI] and insisted that we sign a contract to fully implement this plan.” Nolan stated. “The administration respectfully disagreed and has invested in a community-based approach focused on prevention, especially with youth – and that is precisely what we’re implementing.”

Patricia Mills, a spokesperson for RISC, advocated for GVI at the event on Tuesday, and said it has proven to cut homicides in half and is the “opposite of over-policing.”

RISC co-president Pastor Ralph Hodge said the community could “sense the tension” leading up to the increase in homicides since 2020, the highest number of deaths related to gun violence in Richmond since 2004.

“We went to the mayor in February of 2020 and said ‘you need a gun violence prevention program,’” Hodge said. “Well murders went up. In 2021, the murders were even higher.”

Hodge said he doesn’t agree with parts of Stoney’s approach in preventing gun violence in Richmond, including the mayor’s “insinuation” at a press conference that the Violence Interrupters would be hired by the police department.

Violence Interrupters are individuals who, because of their past positions in the community, retain the ability to reach and talk to key active gang members, according to the National Gang Center. Violence Interrupters utilize these personal relationships to address ongoing disputes, which may prevent them from escalating into shootings.

“Well, our initial response to that was, you do not want to have violence interrupters as part of the police department,” Hodge said. “If you want to get someone killed, that’s a good way to do it.”

Hodge said that he doesn’t believe that public officials understand the reality of gun violence and how to solve it.

“But the issue of resolving gun violence is not done through having more police officers on the street. You can put tons of cops on the street. That’s not what’s going to fix gun violence,” Hodge said. “That might make you feel safer. But that’s not going to solve it. The real solution is to create targeted intervention programs.”