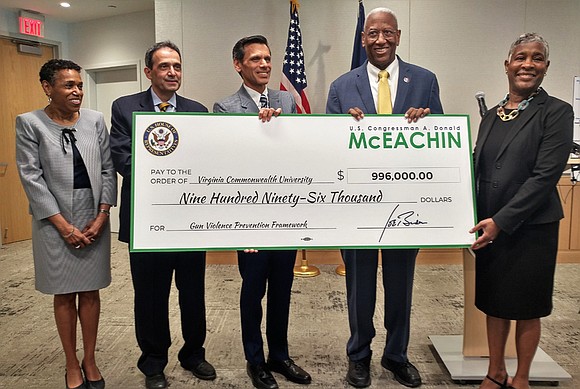 A new program seeking to address Richmond’s recent rise in gun violence is in the works at Virginia Commonwealth University, with a new, nearly $1 million investment backing their work.

Fourth District Congressman A. Donald McEachin presented VCU officials on April 14 with a ceremonial check representing a $996,000 grant for its RVA Gun Violence Prevention Framework, which VCU said will be an “evidence-based public health response to address the underlying social, economic and systemic factors that promote gun violence.”

For Rep. McEachin, the framework is part of a larger shift in the approach to gun violence, one that treats it as a public health issue. It was a perspective he saw “germinating” in other parts of the United States, with VCU potentially the first of similar initiatives in the future.

“You all will be the first of the vanguard of what will be hopefully a solution— maybe not the solution, but a solution to our problems,” Rep. McEachin said.

The grant was among $19.1 million in total investments into various local projects in the district. Congressman McEachin also presented to VCU a separate $400,000 ceremonial check for its RTR Teacher Residency Early Childhood Pathway program.

Already, several groups have come up with ideas to curb gun violence in the city, ranging from hiring interventionists in the hospitals where victims and survivors are taken to address the emotions of those impacted and their families, to deploying violence interrupters to affected communities and empowering grassroots groups already working to address this issue.

The announcement of this framework comes as gun violence continues to impact Richmond residents. According to Dr. Michel B. Aboutanos, medical director of the VCU Trauma Center, the number of gunshot victims treated at the facility has risen by 121 percent during the last two years.

“When I go down to talk to the family, talk to the friends, we’re seeing others who don’t know how to react to the fact that their loved one has been shot, their best friend has been killed,” Dr. Aboutanos said. “They don’t have the means to deal with this. What we’re doing right now is just letting them be.

“We can’t afford that, so the violence interrupters interrupt that cycle, walk with them through this path in order for them to not be involved in that cycle.”

The VCU framework seems to follow a prevention plan outlined in early February by Mayor Levar M. Stoney and an ongo- ing campaign from RISC, Richmonders Involved to Strengthen Our Communities, for a gun violence intervention program that has been used in multiple states. It’s not clear currently how this new frame- work would interact or conflict with plans outlined by city officials.

Rep. McEachin was confident VCU leadership would reach out and work with other groups tackling this issue.

The Rev. Ralph Hodge, pastor of Second Baptist Church of South Richmond and a member of RISC, couldn’t offer many thoughts on the VCU framework’s potential effect because it still under development. But he was skeptical of the amount of money invested given the university’s size and influence.

Nevertheless, he urged VCU to work with groups experienced in studying gun violence in cities to fully understand the problem, and to ensure any ideas and resources are properly directed toward the root causes of gun violence in Rich- mond.

“If VCU really wants to do it right, they need to do a detailed gun violence study of the city,” Rev. Hodge said. “Spend the money, contract an organization and let them do the study. Get the data on the city, compile it, understand the narrative of gun violence and then implement your interventions,” he said.

No date was given for when the VCU plan would be unveiled or implemented.

“We’re making sure that we have the right people at the table. That takes time,” Dr. Aboutanos said. “We’re asking for patience, we’re developing it. And I’m the one most pushing to have it as fast as possible because … we’re seeing (the violence) every day.”