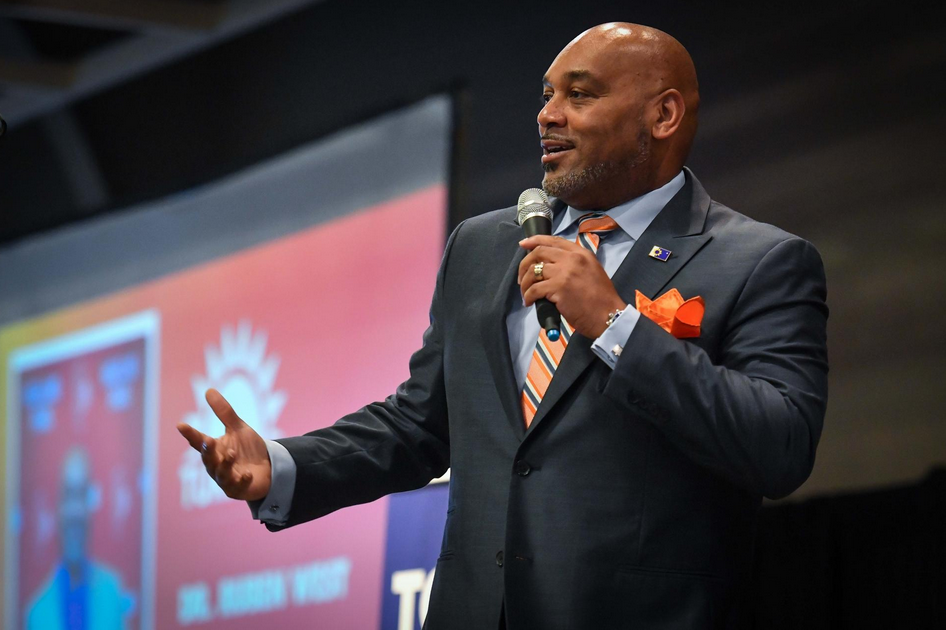 According to Ruben West, moderator of Thursday night’s “The Turning Point” event, “you cannot wake up a person that’s pretending to be asleep.”

That tidbit of wisdom was the punchline to a personal anecdote West shared early on in the evening. It was one of several anecdotes he used to encourage Topekans to get excited about their city.

“If you can’t see all of the changes happening in Topeka right now, you’re pretending to be asleep because there is change happening,” West said to applause.

“The Turning Point” — an event hosted Thursday evening at the Capitol Plaza Hotel and Convention Center and put on by the Greater Topeka Partnership — drew a crowd of more than 100 Topekans. The event, plugged as a “community living room conversation,” allowed attendees to share their thoughts on the current status and direction of the capital city.

And according to West, there were four rules for the night: suspend judgement, be willing to have a good time, allow yourself to have a new experience and, last but not least, “have fun.”

“From what I have experienced, Topeka is trying to change,” said attendee Joyce Revely, who serves on Momentum 2022′s quality of place committee and is an active member of the Topeka Justice Unity and Ministry Project.

“There were a lot of negative attitudes, but I see there are some changes attempting to be made,” she said. “It’s hard to break a bad habit. It’s really hard. But I’m glad to see the attempt, because all the updating and remodeling and tearing down — it’s nothing if attitudes aren’t going to change with it.”

Changing attitudes and shedding a positive light on the city were key goals of “The Turning Point.” West posed a number of questions to audience members, encouraging them to engage in round-table discussions about what they were most proud of in Topeka, what could increase community pride, what attendees were willing to do individually to help out, and what changes have yet to be made.

For Topekan Melodene Byrd, also a member of Topeka JUMP and a 24-year full-time employee of Blue Cross and Blue Shield of Kansas, more cross-organization involvement at public events is crucial to uniting citizens and lifting the community up.

“A lot of times there are things going on in the community, and if it’s in a certain area or certain groups put it on, it doesn’t get the full support that it should,” Byrd said. “We all live in the same city. We’re all Topekans. So I think anytime there’s something going on, if you can, be a part of it.”

According to Revely, change sits on the shoulders of everyone. If a community member is unhappy with a situation, she said, they should do what they can to change it.

“I used to be one that would say, ‘You know, Topeka is blah blah blah’ — it was negative,” Revely said. “It wasn’t until I really got involved in (Topeka) JUMP that I realized I have a say, and if I don’t like something, go about changing it. And that is the vehicle I have found. Because for years, that’s what a lot of people would say — ‘Topeka is this. Topeka is that’ — all negative.

“Now that I have had my eyes opened, I say, ‘Well, what are you willing to do?’”

After West posed a question to audience members and allowed time for discussion, the spotlight shone on “The Turning Point” panelists — Taylor Buckley, SJ Hazim and Jenny Torrence — allowing each of them to share their answers to the same question.

They talked chiefly about the importance of speaking highly of Topeka and called on audience members to take little steps that could result in big change.