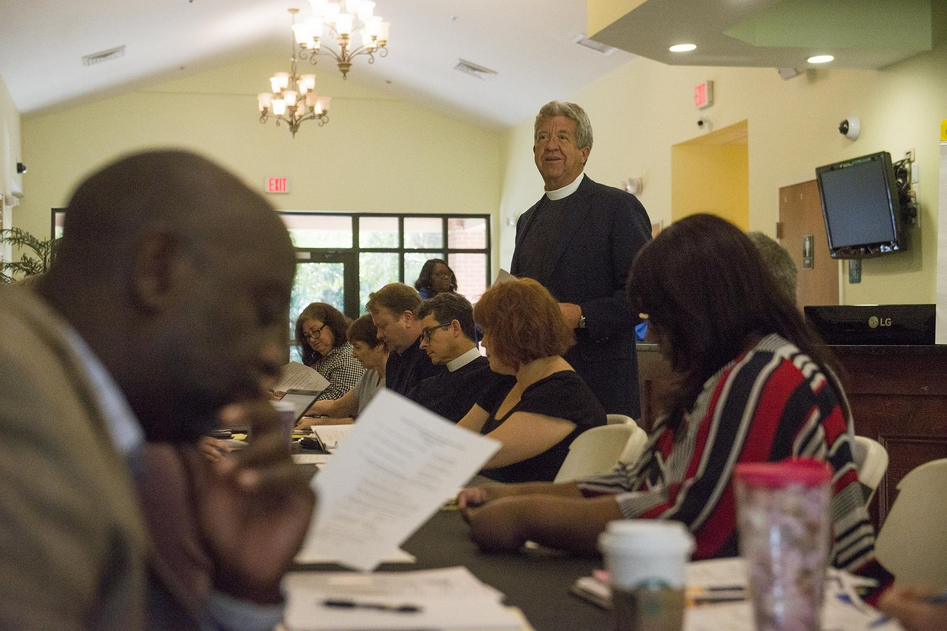 A group of area faith leaders forming a coalition to advocate for social justice issues in the Savannah area held their third meeting on Thursday.

The Savannah Area Interfaith Justice Ministry (SAIJM), currently in the early stages of formation, met at First Jerusalem Missionary Baptist Church. The group’s main goal is to take on social justice reform in the Savannah area.

The group is led by its two co-presidents, Da’Henri Thurmond, pastor of St. Paul CME Church, and Stephen Williams, the minister at First Presbyterian Church.

“Our vision is to address issues of injustice in a collaborative way,” Williams said. “We’re at the beginning point now, but in time, there will be a field director and a very small paid staff, and annually, as a collaborative effort, we’ll discern pressing social issues in the city, narrow it down to one or two that have measurable results.”

Thurmond said one of the key aspects of the organization is its interfaith nature.

“It’s not about necessarily what group you represent as much as it is what group you’re interested in. Who are those in our community who are being treated in a way that they should not be: unfairly, unjustly?” Thurmond said. “The power of it is that people from all faiths, all groups can come together and impact change in our community.”

Though the group’s representation in Savannah is predominately Christian currently, there were representatives from two Jewish congregations and one Islamic congregation at their last meeting.

Rabbi Robert Haas of Congregation Mikve Israel was in attendance on Thursday. He said he was impressed with the number of faith leaders who have shown interest in the group and expects the number to grow.

“I’ve seen people from a wide variety of faiths come together for different things, to get to know each other to help the community, but I’ve never seen such a wide variety of people in one room who came together to do something,” Haas said. “This is unique for me in my almost 20 years as a rabbi.”

SAIJM hasn’t yet identified the issues it will tackle in the coming year. Currently, they’re bolstering their numbers, hoping to gather as many faith leaders in the community as possible.

SAIJM’s process is similar to other groups founded under the approach used by the Direct Action and Research Training Center, a national network of 24 affiliated grassroots, nonprofit, congregation-based community organizations.

First comes the listening stage, when leaders within the ministry spend time meeting with others from their congregation in order to strengthen their relationships, discuss community problems and establish networks. Through these conversations, they determine areas of common interest in their communities.

Then the group researches these issues. Leaders form research committees to determine viable solutions that will help curb the problem and identify those in the community with the authority to implement those solutions.

“If you get a leader from city council, the mayor’s office, the sheriff’s department, the police department or the school district, and get them in a room with 3,000 people, their constituents, that represent 50,000 people, I think you’re really going to really be able to do something,” Haas said.

Then the group moves to the “action” phase. They hold a large public meeting called a Nehemiah Action Assembly. It’s named after the biblical Nehemiah, metaphorically resembling the public gathering prior during the rebuilding of Jerusalem.

At these assemblies, members from all of the congregations involved in the ministry gather to hear testimonies about how these issues affect people’s lives and negotiate solutions with appropriate authorities in attendance.

The group aims to get things rolling next year, and Thurmond said he’s excited about the potential good SAIJM can do.

“I’m excited about the way this organization is set up,” Thurmond said. “And I’m excited about what I think is going to happen when we all get together and decide on those one or two issues we’re going to tackle every year in Savannah.”