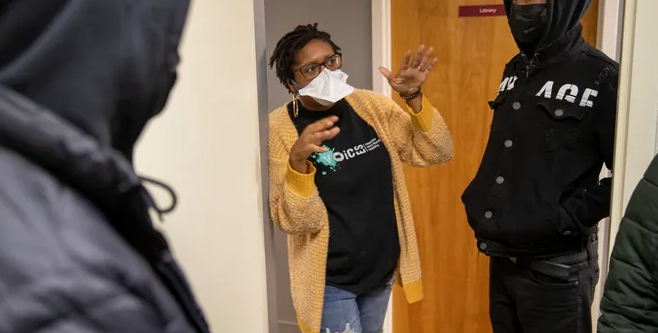 “Too many neighborhoods and too many residents live in fear,” the mayor said.

The National Network for Safe Communities, according to Winnecke, “has a proven track record” of helping communities reduce homicides and other violent crimes, including in cities similar to Evansville.

Congregations Acting for Justice and Empowerment, a coalition of Evansville faith-based organizationsfocused on community issues, has encouraged city government to work with the National Network for Safe Communities. The group is based at John Jay College in New York.

A fraction of a community’s population is responsible for a substantial portion of violent crimes, Aviles said. The organization’s approach involves “direct sustained engagement with populations that statistics show are perpetuating such violence.”

Aviles said the group’s work “begins with facts on the ground.”

She said the message that community leaders take to those most at-risk of becoming involved with gun violence is, “We need you here; we want you here, and we need you to stop with what you’re doing because it’s killing us. We need to say that with authority.”

The city’s contract with the National Network is for two years, but Winnecke said the organization agreed to spread its payments over three years.

“This is a significant investment,” said Council Finance Chair Zac Heronemus, D-Third Ward. “However, I think after the two years we work to build this, it is something that can carry on indefinitely.”

Councilor Alex Burton, D-Fourth Ward, said there have been homicides in the city within 1,000 feet of his home, and “I’m elated to bring these services to Evansville.”

Insurance resolution defeated
In an 8-1 vote Monday, the City Council defeated a nonbinding resolution presented by Elpers encouraging Winnecke’s administration to make changes to its employee health insurance program and shop for a new carrier.

The city runs an annual deficit in its health insurance fund (often called the “hospitalization” fund). The deficit is currently about $2 million. It had soared to $4.9 million at the end of 2016, following a year of numerous expensive claims.

The deficit is covered by other city accounts with positive balances.

Elpers said after the council meeting he remained concerned the city’s program has too much risk because of a lack of caps on claims.

“We do review it on a regular basis. Whether you’re talking about health care or property and casualty, we take this very seriously, and we look at it line by line,” Winnecke said.

“We have a very professional partner that’s proactive in addressing the needs we have as a city,” said Ben Trockman, D-1st Ward. “I am confident in our executive body doing its due diligence, and also our partner.”