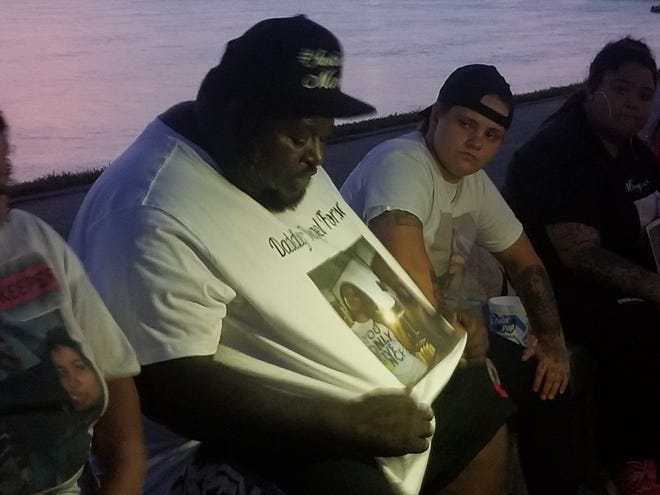 EVANSVILLE, Ind. — Donald Brigham was 47 when he died. Keshon Hensley was 23. Kielyn Toone and A’Jayden Ware were both 19. And most recently, Dashambe Atkins was shot dead at 25 years old.

In less than five months, Evansville has seen six homicides this year. The men named above are five of the six killed this year and those whose killers have not been publicly identified or arrested.

Brigham, Hensley, Toone, Ware and Atkins are the latest victims on a growing list of open homicide cases in the city, more than a quarter of which happened in the last year and a half alone.

So why are an increasing number of cases remain unsolved with no arrests or adjudication in recent years?

Community members and law enforcement say a lack of cooperation and information often prevents police and prosecutors from building strong enough cases against the individuals responsible and bringing closure to victims’ loved ones.

“The more information we get from the public, from witnesses or surveillance video … the littlest of information can help us,” Evansville Police spokeswoman Sgt. Anna Gray said.

‘We have no justice’
The last year has been the worst of Kareem Strother’s entire life. When his 20-year-old daughter, Mariah, was shot and killed outside an Evansville gas station on May 30, 2020, Strother was blindsided.

“We never knew nothing like this was coming. You never see it coming,” Strother said. “I’m still in denial. It’s been hard for me to accept that my daughter’s gone. And then to know that we have no justice at the moment — I’m really frustrated and mad and angry.

“I guess I’m hurt more that my daughter’s not here.”

May 30 will mark not only the anniversary of Mariah’s murder but also one year without an arrest made or suspect publicly identified in connection with her case. Her family is planning a butterfly release to observe the anniversary.

Mariah’s killing has prompted Strother to share his story with youth through seminars at the YMCA. He’s working to put up billboards to refresh the public’s memory of Mariah’s death and has organized a number of events including community walks against violence.

“I’m trying to make it where other families don’t have to go through this,” Strother said.

“It’s sad that our community is having to endure so many tragedies, and so many young people are going to their graves at a young age,” he said.

The number of people killed in 2020 reached 15 by the end of the year, with seven of those homicides yet to be cleared, including Mariah’s. With more than half a year to go, Evansville has already reached five unsolved killings out of six in 2021.

As violent deaths have mounted, Strother has made a point to reach out to other families who have lost their loved ones to gun violence in recent weeks.

“It’s very tragic to see another family have to go through what my family has went through, and many more families have went through,” Strother said.

At 42 years old, he doesn’t remember fatal shootings and other violent crime being so commonplace in Evansville.

“A lot of innocent kids have been affected by this so bad,” Strother said. “It’s becoming a weekly trend.”

Strother used to view Evansville as a nice place to raise a family; now, he said, many people are on high alert.

“Every time you turn on the news there’s another shooting now,” he said. “Another death.”

Frustration and fear of retaliation
Strother does not blame Evansville Police for the lack of progress in bringing justice to Mariah’s killer; he recognizes that detectives can only work with the information they have.

He thinks oftentimes a breakdown in communication between law enforcement and local communities is to blame for people not taking the initiative to report information that could be a lead for investigators. It’s “frustrating,” he said.

Mariama Wilson, Pigeon Township Trustee and Mothers Against Senseless Killings founder, said much of the gun violence originates with the same groups of people.

That possibility — that an individual or group may come after those who go to the police or their loved ones — is a source of people’s silence, Wilson and Strother said.

Wilson said she doesn’t think most people withhold details out of spite or hatred toward the police; in her experience, people are afraid the people involved in the killings will come after them for speaking up.

“They’re scared; they’re frustrated,” she said. “Without a fear of putting (themselves) or their family in jeopardy, they feel like there’s nothing else that the police are willing to do.”

In some cases, Wilson said a “street code” is what discourages people from cooperating with the police or choosing to protect loved ones who committed the crime.

In reporting this story and other recent shooting deaths, families and friends of homicide victims often request anonymity or decline to participate because of the fear Wilson and Strother spoke about.

A family member of one victim declined an interview with the Courier & Press because they feared for the safety of the rest of their family. They said their home was shot at with several rounds entering the home after their loved one was killed, inflaming their concerns.

“You have a community that is scared,” Strother said.

‘We have one chance to get it right’
“I believe that you can’t just put this on the police,” Strother continued. “It takes people to help build these cases, but we need the community to come forward, too. It’s not the police. If the police don’t have enough evidence, then basically there’s nothing they can do.”

Gray, who worked as an EPD detective for two years, said the fear of facing consequences for speaking out is a factor the police see at play, at least initially.

“We understand that it is a big step to come forward and tell something,” she said, so police try to alleviate potential witnesses’ concerns and work with them to make them comfortable cooperating with an investigation.

Detectives often hear potential witnesses express concern over facing legal consequences for not coming to police immediately after a crime, misremembering details like the exact color of a vehicle, or having to testify in court.

Law enforcement officers try to work with witnesses as much as they’re able, Gray said.

“We understand that’s a fear, too,” she said. “The whole court process can be a little bit intimidating. So we try to walk people through that process as well, and if somebody really doesn’t want to testify, we try to get around it.”

It is often the case that immediately after a crime like a homicide, police have little information to go on. But as days and weeks pass and police talk to more people, more individuals start to come forward. “I think people start to relax a little bit and realize that they do want to help,” she said.

“Eventually we do have a lot of cooperation,” Gray said. “I think at first people are a little bit nervous. I think the biggest reason why people are hesitant to come forward, especially right after an event happens, is fear of retaliation.

“The reality is that can be a real thing, but overall, we don’t always experience that to the magnitude that people think.”

Along with physical evidence such as DNA and fingerprints, or surveillance footage, witness statements are core parts of an investigation, Gray said.

EPD does not have one detective or unit dedicated solely to investigating homicides; the Adult Investigations Unit distributes homicide and other cases among 17 detectives, with four supervising sergeants who assist on investigations as needed.

When a homicide occurs, the AIU meets daily. “The homicides are our priority,” she said.

Gray said that just because police haven’t put out suspect information or made an arrest doesn’t mean the case has gone cold or been put on the backburner by detectives.

She said that in many active cases, detectives have a suspect in mind but not enough evidence to make an arrest. They hold their cards close to protect the integrity of their investigations.

“If the suspect catches wind of, ‘Oh, they’re looking at me as a suspect,’ they may go on the run,” Gray said. “So that’s why sometimes we don’t put all the information out, because we don’t necessarily want certain suspects to know that we’re looking at them until we’re actually ready to make an arrest.”

Gray said that when a case has been active without significant progress over a period of time, detectives may decide to put out another press release or try to get a story in the news media to refresh people’s minds and, hopefully, provide new leads.

“We never clear out a case or close out a case just because it’s stale or maybe we’ve kind of hit a dead end,” she said. “It’s always active,” and has a lead detective assigned.

Gray said that in some cases, families of victims come up with reward money to encourage people to come forward.

Recently, the family of 50-year-old Troy Dewayne Smith – found dead of a gunshot wound May 24, 2020 – decided to offer a $5,000 cash reward for “information that leads to the successful prosecution of the person or persons responsible for Troy Smith’s death,” a statement said.

Gray said the AIU detectives try to keep homicide cases “fresh” in their minds so they aren’t forgotten.

“Especially the victim’s family, we don’t ever want them to feel like we’ve put it to the side,” she said. “It’s always right there right in front of us; we have a board with all the cases that we can come in every day and look at them. That way we don’t forget about any cases like that.”

‘You are doing a good thing’
“By the time this month ends, it’ll be 365 days I’ve cried,” Strother said. “I miss my daughter so much.”

Strother said that in many cases, it appears to the public as though the individuals responsible for killings aren’t facing the consequences of their actions.

He urged people to not see helping police investigations as “telling” on someone. “You are doing a good thing” and helping victims’ loved ones get closure, he said.

Wilson said that when people think the police aren’t doing anything to address recent murders, some choose to take the situation into their own hands, feeding the fear of retaliation among others.

“I can’t imagine it helping the pain any,” she said. “The person that you’re retaliating for is still gone, you know, they’re not coming back. So taking another life is definitely not the answer.”

In March, the Evansville City Council took a step toward addressing violent crime, voting to allocate $385,000 over three years to pay for a partnership with the National Network for Safe Communities, an organization that studies violent crime in cities and creates plans to address the underlying causes, usually through group violence intervention.

Local groups like MASK, Boss Inc. and Congregations Acting for Justice & Empowerment – who initially reached out to the NNSC – have been speaking out about gun violence and other crime in Evansville neighborhoods.

“People think sometimes that we have all the tools and all the capability and all the technology to solve these cases by ourselves,” Gray said. “But the reality is we need the public’s help.”