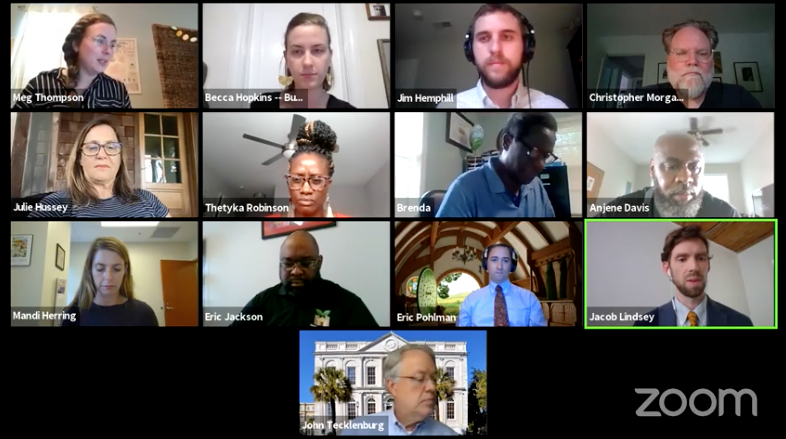 Skepticism and hope for equity impacts of Charleston 10-year plan

The city of Charleston’s update to its 10-year comprehensive plan at a time of social upheaval seems serendipitous. With conversations about race and reconciliation hurled into the spotlight over recent months. With “strength in diversity” as a core value of the new plan, activists and Black leaders remain cautious of the city’s claims of attempted racial equity.

“This plan really is an amazing opportunity, I just don’t have any faith in this current city council, this current mayor,” said Charleston Activist Network director Tamika Gadsden. “This plan is the right thing, it’s the enforcement of the plan that I’m leery of.”

Daron-Lee Calhoun, Avery Research Center’s race and social justice coordinator and a member of the city’s fledgling racial conciliation committee, said he is cautiously optimistic about the plan. “[The city] has to give us something to believe in,” he said. “We have an opportunity to make some true change, but we’ll see where it goes when we get down to the nitty gritty of it.”

The comprehensive plan is rewritten every decade to plot the city’s growth in key areas such as housing, transportation, development and land use, with the intention of illustrating what the city will look like in 2030. Jacob Lindsey, the city’s director of planning, preservation and sustainability, said the plan will go “above and beyond” on addressing additional issues, including racial equity.

The topics discussed in the plan can help combat racial inequity, but Calhoun believes the city should also take influence from Avery’s 2017 racial disparities report. The oft-cited study lays out the wealth gap between white and Black, the impact of gentrification and disparities in homeownership. The report also shows how the inequities are interconnected.

Admitting this would make it more difficult to address inequities, Calhoun said, “If it’s not difficult, then you’re not doing the right thing.”

“If you think this is an easy job trying to peel back over 200 years of racial inequity in Charleston, then you’re on the wrong track,” he said.

Gadsden and Elise Davis-McFarland of the Charleston Area Justice Ministry agree that an equitable comprehensive plan is dependent on citizens voicing their opinions to the city, and the city reaching out to its citizens. Gadsden encourages everyone, including businesses and local institutions, to get the word out about the plan’s required community input. The city of Charleston will hold regular community listening sessions in person and over Zoom across town, from Cainhoy to Johns Island.

According to Lindsey, the city is attempting outreach into minority and low-income communities. “We brought in a locally connected engagement team which we’ve never done for our comprehensive plan before,” he said. “It includes some folks who are really experienced at doing public outreach, but also some folks who are really connected with our African American community.”

Gadsden was quick to note a technology gap for poor and Black residents. “COVID-19 has exacerbated and magnified these glaring gaps in who has access to these tools they need to speak up,” she said. “The city going completely virtual with its meetings actually creates a barrier for folks.”

McFarland said past reports seem to have been written “without input from people who are going to be affected by the plan.”

“Housing in Charleston is so diverse because income levels are so diverse, but in terms of planning and zoning, we need the input of a diversity of folk,” she added.

Gadsden questions how willing the city is to make changes to rapidly improve the local Black community, though she is encouraged by the involvement of activists like AJ Davis. She suggests divesting from development in favor of access to capital for Black men and women or subsidies for first-time homeowners displaced by gentrification.

“If the city was intentional and honest and was actually enthusiastic about repairing these chasms that exist between Black Gullah people, indigenous people and wealth and opportunity, we would actually see that in radical redistribution of wealth,” she said.

McFarland is also skeptical of the city’s willingness to commit to the plans they lay out, referencing some of the promises in past plans that never became reality.

“The [2011] plan itself, when you read it, is not a bad plan. It’s not as inclusive as it could be, but it’s not a bad plan,” she said. “The problem is that everything that was in that plan was not achieved. If the city does come up with a good plan, there really does need to be a total and full commitment.”

The full schedule of meetings, Zoom calls and other ways citizens can get involved can be found at charlestoncityplan.com.