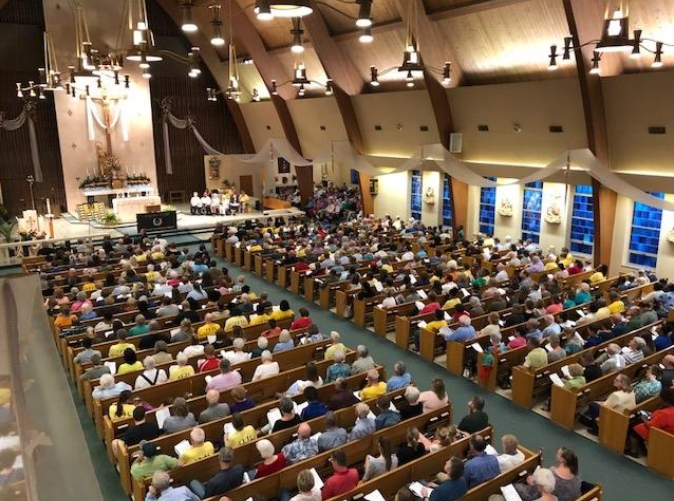 About 1,000 people listened intently to a message of justice Monday evening as the Topeka Justice Unity and Ministry Project held its fifth annual meeting to talk about problems the city’s residents face.

The meeting was held at Most Pure Heart of Mary Catholic Church, where members of 19 congregations listened to how city officials planned to work on safe and affordable housing and public transportation, the meeting’s two topics.

The Rev. Roger Neufeld Smith, co-chairman of JUMP, said housing and transportation were brought to JUMP’s attention during a fall meeting that looked at people’s concerns.

“Almost half who rent spend 50 percent of their income on housing,” Smith said.

He said public transportation was found to be an issue because some employers are located just outside of Topeka and employees don’t have a way to get to their jobs. JUMP worked with Susan Duffy, general manager for Topeka Metro, on a pilot project to subsidize taxi rides to some employers.

Smith said the pilot project was successful and that JUMP planned to ask Duffy at the meeting if she would be willing to expand the service.

Olga Hennessey, a member of JUMP’s board of directors, said more than 1,000 people attended the meeting and called it evidence of building a culture of justice

“We have people from all walks of life gathered here tonight in one place, at one time, on one accord,” she said.

Smith said JUMP hoped the meeting would give city officials a sense of urgency to fix the issues discussed there.

“We know people will be coming with a sense of urgency,” Smith said. “Our folks know people who are hurting and need these services.”