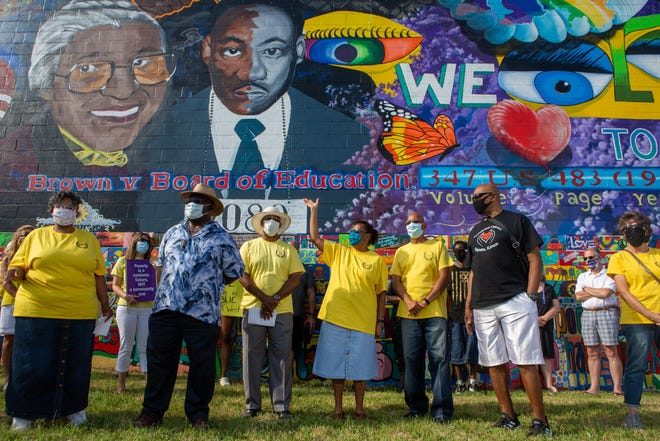 Judy Clingman said she lived in affordable housing that was infested with roaches.

She brought up the infestation to the property manager, but her complaints fell on deaf ears.

“I stopped cooking because every time I cooked more bugs came out,” she said in a video presentation by the Topeka Justice Unity & Ministry Project at its Nehemiah Action meeting on Monday night. “It made me feel dirty, and then they weren’t doing anything about it.”

The bug issues were made worse during the COVID-19 pandemic when everyone was quarantined to their homes.

Clingman said she was waiting for assistance before she could move out of the apartment. Presenters at Topeka JUMP’s meeting said they heard similar stories of tenants “trapped with nowhere else to go” due to a lack of affordable housing.

The fund also can be used to encourage developers to build affordable housing.

The Rev. Harry Christian said $277,000 has been allocated to the affordable housing fund with a proposal to add $500,000, but he wants the city to expand its commitment beyond a down payment.

Trout committed to creating an annual funding stream for the trust fund by the end of 2021 and said he would meet with members of Topeka JUMP to see how federal funds can help. Christian asked Trout to add $5 million to the housing trust fund by January 2022, but Trout couldn’t commit to that amount.

De La Isla said at a separate news conference Tuesday that she would like to see at least $2 million to $3 million “in a steady source of income” for the trust fund. She said it is the Topeka City Council’s decision on how much money to put into the fund.

Topeka received $47 million in the American Rescue Plan, but the city doesn’t know how those funds could be used. Trout said he plans to meet with members of Topeka JUMP within 45 days after he learns how that money can be spent.

“There is much groundwork that has been laid,” Trout said. “The structure is there, and now it is about working together to make those types of things happen and find projects that can be successful and provide housing for those that need it.”

That housing provides homes to people who recovered from addiction and can be twice as effective at preventing relapses, said Pastor Curtis Odum. There are 19 Oxford Houses in Topeka, but they are usually full.

Topeka JUMP is working with the Kansas Department of Aging and Disability Services and Friends of Recovery Association on a Shawnee County Oxford House expansion plan.

“Our community needs these houses so people in recovery can have a fighting chance,” said Odum, a member of JUMP’s mental health and addiction committee.