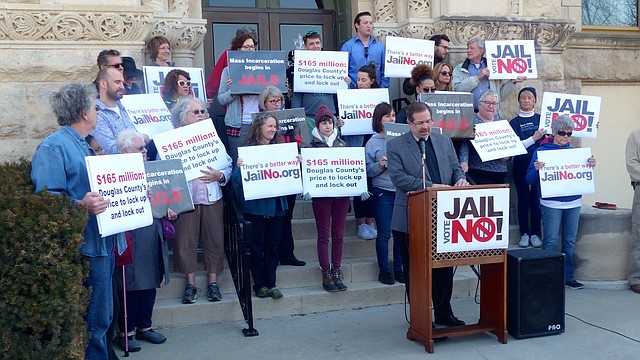 A week after county voters rejected Proposition 1, two key groups in the fight against the referendum said they’ll push the county to move ahead with the ballot question’s behavioral health components while bringing in outside expertise to review the county’s criminal justice system.

The demands from the faith-based activist group Justice Matters and the social justice advocacy organization Kansas Appleseed are not new. The Jail No coalition, which consisted of those two groups, the Douglas County chapter of the NAACP and the taxpayer watchdog group Lawrence Sunset Alliance, made similar demands while it campaigned against Proposition 1.

A Justice Matters leader said the defeat of the sales tax proposal — with 53 percent opposing the tax and 47 percent supporting it — spoke loudly.

“We now know that the voters in Douglas County want increased mental health services,” Ted Mosher, co-president of Justice Matters, said in a written statement. “They have rejected the idea that the jail should be expanded. They want socially and fiscally responsible criminal justice reform.”

Leadership of Justice Matters and Kansas Appleseed are encouraging county residents to attend the Douglas County Commission’s May 30 public forum to make their positions on the jail and behavioral health needs known.

To accommodate a large crowd, county commissioners have rescheduled the public forum for 7 p.m. in Building 21 of the Douglas County Fairgrounds. Douglas County Commission Chair Nancy Thellman said the commission was willing to listen to the public, and that the new meeting place reflected that. But she added that she still saw the need to address issues at the county jail.

“Nothing has changed,” she said. “We still have overcrowding at the county jail, and we still have programs out there that aren’t effective because our inmates are in jails out of county.”

Mosher, in his statement, said Justice Matters is calling for the county to take at least two actions:

• The establishment of a behavioral health campus and associated services in conjunction with community partners through a county ballot initiative with no other components. The statement doesn’t address whether the funding mechanism should be a sales tax or a property tax.

• A review of the county’s criminal justice system by the Vera Institute of Justice and the start of a community conversation on the “collateral damage” incarceration has on people of color and the poor. The group notes the MacArthur Foundation is currently accepting grant applications to fund Vera Institute reviews.

The Justice Matters statement further calls for the county to seek funding for the behavioral health campus from the state, private foundation grants, Lawrence Memorial Hospital and through service agreements with nearby counties without crisis centers.

Rose Schmidt, co-president of Justice Matters, said that a more diversified funding solution was based on how other crisis centers in the state were developed.

“We have a definite preference for more diversified funding than just the county,” Schmidt said. “We think that’s a better funding model.”

Benet Magnuson, executive director of Kansas Appleseed, said his organization also was calling for the county commission to advance a ballot question to fund a behavioral health campus that is adequate for the county’s needs.

“I think it’s safe to say a sales tax is more regressive than a property tax, but the main focus is that that the behavioral health campus be on a ballot separate from the jail expansion and adequate for the county needs,” he said.

Magnuson agreed a Vera review would be valuable.

“It’s pretty clear that whatever is going on in Douglas County in regard to the criminal justice system is complicated and could use as many eyes on it as possible to look for solutions,” he said.

He was optimistic that the May 30 meeting could start a community conversation on a holistic approach to justice, including consideration of homelessness, support for families and other needs that have been overlooked with the focus on the jail expansion, Magnuson said.

In April, Justice Matters announced it would start a petition drive to compel the county to advance a ballot question, which would ask voters to approve an additional 3.5 mills in property tax authority to finance a mental health crisis center. At that time, Justice Matters leadership said funding for the crisis center should include money from the state, foundations, Lawrence Memorial Hospital and nearby counties in need of crisis mental health service.

Schmidt said Wednesday the petition drive was on hold pending the county commission’s direction after the May 30 public meeting.

“We are hoping to take the county at their word that the listening process will be genuine,” she said. “If they go forward with the same direction, we’ll restart the petition drive.”

It’s unclear how effective the Justice Matters petition as written in April would be in compelling county commissioners to put a ballot question before voters. County counselor John Bullock has found the state statute cited on the Justice Matters petition — K.S.A. 19-117 — only allows for referendums on tax issues that haven’t already been contemplated by the Kansas Legislature. The Kansas Legislature already has devised a process for how counties can levy property taxes. As such, the law doesn’t allow for a referendum that would force the county to put a property tax increase proposal on the ballot.

Justice Matters leadership disagreed with that finding and said the group would seek legal recourse if the county denied a submitted petition with the required 4,000 valid signatures.