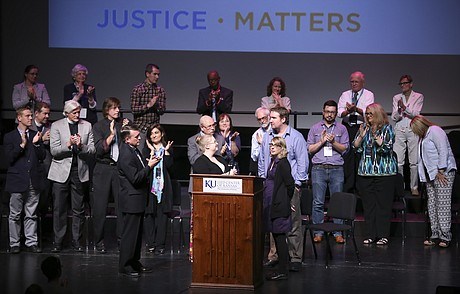 LAWRENCE — An interfaith organization filed a lawsuit Monday to force a public vote on the Douglas County Commission’s plan to invest $30 million in a jail expansion.

Voters in the county rejected in May 2018 a proposal to rely on a 0.5% sales tax increase to finance an addition to the overcrowded jail. That vote was 13,811 opposed and 12,257 in support of the idea.

In January, however, the Douglas County Commission concluded a county ballot measure adopted in 1994 gave commissioners authority to issue bonds backed by current sales tax revenue to pay for about $22 million of the prison project with the remainder drawn from other county resources. The commission unanimously passed a resolution approving construction of up to 112 beds at the 186-bed Douglas County Correctional Facility.

The work was expected to begin this spring, but plaintiffs requested an injunction to halt the project pending a vote of county residents.

Justice Matters, a Lawrence organization, asserted in the lawsuit filed in Douglas County District Court that the commission’s financing strategy for the jail was illegal because it ignored voting rights of citizens. The group and its allies believe implementation of justice reform programs designed to keep people out of jail were preferable to building new space to incarcerate people.

“All political power is inherent in the people,” said Brent Hoffman, co-president for Justice Matters and co-chair of the Jail Alternatives Action Committee. “If you walk into our state’s Capitol, you can actually see these words engraved in stone.”

“We do not have a comment at this time, but I anticipate the County will issue a statement later this week,” Bullock said.

Plaintiffs said the lawsuit was a vehicle to put the expansion plan to a vote by Douglas County residents. Organizers said a state law gave citizens the right to circulate a petition and and, with approximately 2,500 valid signatures, trigger a public vote.

“The people of Douglas County do not want a bigger jail until analysis, criminal justice reforms, and alternatives to incarceration have been fully implemented,” Hoffman said.