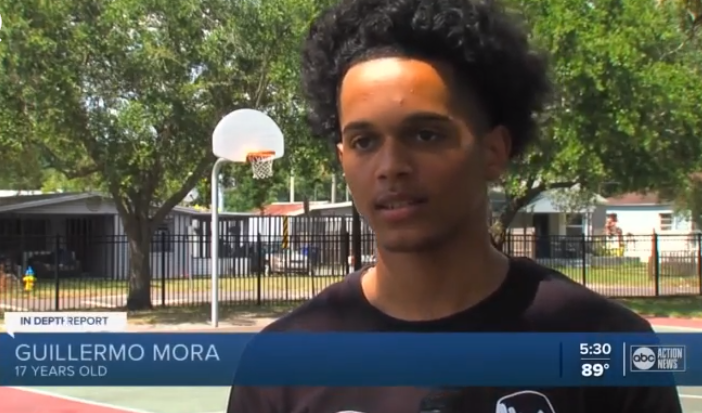 TAMPA, Fla. — Being charged with a misdemeanor as a minor often has a lifetime of negative consequences. That’s why the Hillsborough County Sheriff’s Office will start to make their diversion program mandatory for all minors who commit a misdemeanor.

ABC Action News in-depth reporter Anthony Hill is uncovering what this means for minors who run into issues with the law and he spoke with local juvenile activists about the importance of a second chance, especially before adulthood.

Guillermo Mora is 17-years-old and lives in Brandon. He says all too often, kids around his age are arrested and charged with a misdemeanor, leaving them with a record that follows them for the rest of their lives.

“Sometimes we’re too young. The stuff we do, sometimes we think it’s cool and stuff like that and we don’t know what we’re thinking at the moment,” said Guillermo.

“I didn’t want to see children who make a poor decision being saddled with the difficulties of a criminal history for the rest of their lives,” said Hillsborough County Sheriff Chad Chronister. He says it’s important to find more constructive ways of punishing and reforming children.

Some Bay Area counties use juvenile citation programs, which are diversion programs for minors who commit certain misdemeanors. Instead of being locked up and left with a record; offenders do community service, go through counseling, and/or pay restitution. But, law enforcement officers can use discretion to determine who goes through the program and who doesn’t. Sheriff Chronister says the county will be expanding its civil citation program by making it mandatory for all minors who commit a first misdemeanor offense. Over the past three years, about 91% of juveniles who’ve completed their diversion program have continued to stay out of trouble. “Which definitely showed me it was time to expand these programs,” Chronister said.

Hillsborough County started its civil citation program back in 2005, but many misdemeanors didn’t qualify juveniles to take advantage of it, leaving them with permanent criminal records that could jeopardize their futures.

“We all have made mistakes in life,” said Reverend Bernice Powell Jackson, with the Hillsborough Organization for Progress and Equality. Her organization started pushing for the expansion of the Hillsborough civil citation program years ago when they noticed that most charges were misdemeanors for possession of marijuana. “We don’t think our children should be using marijuana, on the one hand, but we also don’t think that they should have an arrest record that follows them for the rest of their life, that impacts whether they can get into the military, they can get scholarships.”

She says though she’s happy about the progress being made; they’d like to see the civil citation program extended to juveniles who commit a second misdemeanor. “So that’s one of the things that in the future we’ll be talking to our county officials about,” Powell said.

“I feel like before we give a teenager, a juvenile, any kind of tickets or any kind of records, look at them as our own kids,” said Tommy Carstarphen, who’s Guillermo’s mentor and the founder of Brakin Out Inc, which is a local organization that works with at-risk youth.

The nonprofit builds relationships with local courts in order to mentor minors instead of incarcerating them. “Our goal is to work with the courts to get kids who already have records, to get those records expunged,” Carstarphen said.

As for Guillermo, he’s pleased to hear that kids his age won’t go through life with a record for committing their first misdemeanor. “Sometimes, I feel like police, they don’t understand our decision, the way that made us go that route. They don’t understand that. So, giving us a second chance, that’s a start,” said Guillermo.