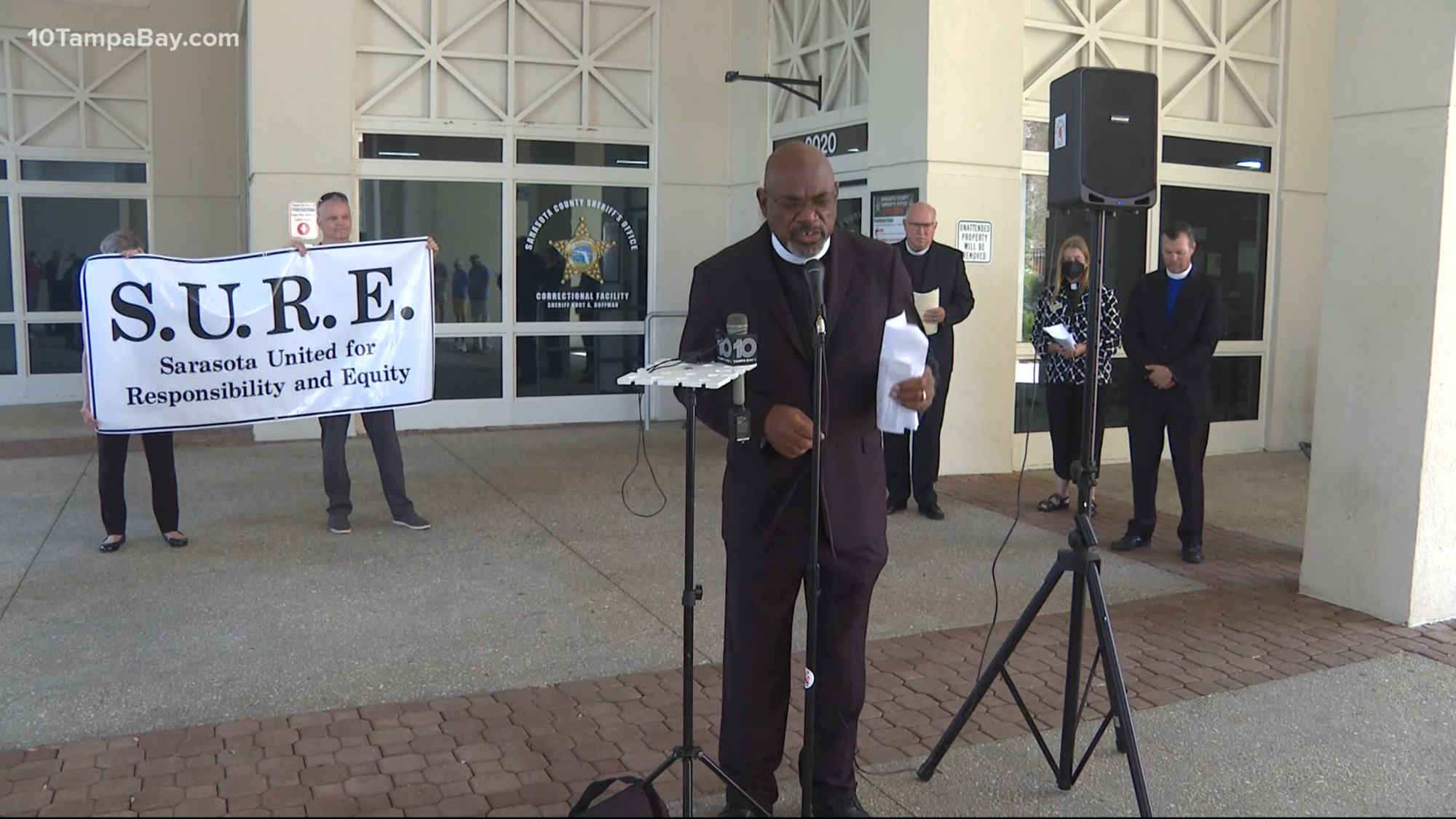 Sarasota faith leaders call for an end to ‘criminalizing poverty’

SARASOTA, Fla. — A group of faith leaders in Sarasota has called for an end to what they term “criminalizing poverty.”

The clergy members came together Tuesday under the group Sarasota United for Responsibility and Equity (S.U.R.E) which is made up of leaders of more than 20 churches in Sarasota County. The group has been actively working on social and criminal justice issues in the county for more than two decades.

The faith leaders wanted to draw attention to disparities in who gets arrested for minor misdemeanor offenses and the challenges they have to face because they now have the burden of a criminal record. They also said the cost of fees and programs to help people rectify such situations are often too high and can be unattainable for people who genuinely require it.

“We believe in redemption and second chances, everyone deserves a second chance,” said Rev. Patrick Miller of Bethlehem Bible Church.

“People shouldn’t have to be branded for life with a criminal record for a first-time misdemeanor and offenses related to driving violations. We need to stop collectively criminalizing poverty,” Miller said.

The group is concerned that minority and low-income offenders are impacted the most and are getting their records tainted permanently for these low-level offenses.

“We are calling the systems of justice to account so everyone is treated with equity regardless of background,” he said.

S.U.R.E’s leaders urged for an affordable civil citation program for adults. A similar program for juveniles is utilized by the Sarasota County Sheriff’s Office to help teens avoid a criminal record through rehab, restitution, and community service.

Such a program helped a 13-year-old under Sharon Hurskin’s care avoid a criminal record.

“She went in there and stole stuff that didn’t even come up to $10 and the thought of having her have that on her record to me, as a 13-year-old, it just broke my heart,” said Hurskin of Sarasota.

Hurskin said law enforcement is often unkind and unfair to minority teens and young adults and subjects them to racial prejudices when it comes to applying consequences.

“If you have a white child, nine times out of 10, they just won’t even do the time. They just pop them on the hand and they let them go. We have children in all colors that steal, but when it comes to Black and brown, Hispanic and what you classify as other races, they have a harder time and they don’t get any break or have any support at all,” Hurskin said.

According to data presented by the group to support their claims, of 7,230 adult misdemeanor arrests in Sarasota County in 2019, 3,348 (46%) were for non-criminal offenses linked to issues like driving without a license or on a suspended or expired license. S.U.R.E said the data showed that in Sarasota County, minority individuals were five times more likely to be arrested for a misdemeanor offense than their white counterparts.

One of the clergy members shared a story about her brother who she said was racially profiled during a traffic stop while in a vehicle with two of his lifelong friends who were not African-American.

“Oxycodone was found in the car, but not on him, but in the car. He was arrested but the other guys were not arrested, he was arrested and at the time, the public defender, they were offering him 10 years because of something that had happened when he was a youth,” said Pastor Keturah Pittman, the former pastor of Greater Hurst AME Church.

According to Pittman, when the family was able to help him secure a private attorney, she said the case was dismissed because it was determined that the officer arrested him because of his race.

“They had no reason to stop them but simply because he was an African-American, in the car, with two white guys. He was able to get out of that number, but think of the number of the ones who did not have the wherewithal to hire a private attorney,” she said.

“Criminal justice needs to be blind to race and ethnicity and national origin and all those factors,” said Ed Brodsky, State Attorney, 12th Judicial Circuit.

The State Attorney’s Office has already started looking into the matter of providing a pre-arrest diversion program through Adult Civil Citation. The office is currently working with the sheriff’s office to fashion out a proposal to help.

“Every offender that meets the qualifications should be eligible to participate in the program and law enforcement when they have those opportunities and they identify those individuals that qualify for the program, should be talking to them about bringing them on,” Brodsky said.

“The program would offer them an opportunity to complete an educational and rehabilitation component, perform public service, earn hours in the community service that benefits our community. It allows those first-time offenders an opportunity, pre-arrest, to avoid an arrest record. It’s a smart approach to criminal justice, to bring a truly educational, rehabilitation component to an offender who commits a non-serious offense,” he said.

Faith leaders with SURE agreed that this plan is a tangible solution but added that the proposed $165 fee for the program negates the effort because it is too high for many to afford and opt into.

“We have persons in our community in Sarasota that can’t afford $165 so it becomes a pay-to-play situation and that is inequality and that is injustice,” said Rev. Carla McCook, S.U.R.E.

The state attorney said the program requires funding and the fees would help make it available to the public. He hopes to have it in place before the end of the year and said he is taking all the issues raised by the faith leaders and advocate into consideration as they continued to work towards the finalized details of the program.

Meanwhile, in January, some groups sued the Sarasota County Clerk of Court for suspending nearly 2,000 licenses over unpaid fees. According to the lawsuit, between July 2006 & March 2021, the ACLU said the clerk of court suspended 1,883 driver’s licenses for failure to pay costs fines related to non-criminal violations.