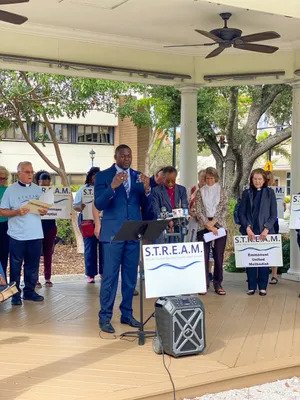 BRADENTON — Faith leaders in Manatee County have called on Sheriff Rick Wells to take action toward implementing an existing diversion program that gives adult offenders a fresh start after committing non-violent, misdemeanor offenses in the county.

Nearly two dozen pastors, rabbis, other faith leaders and supporters of the Stonger Together Reaching Equality Across Manatee (S.T.R.E.A.M) organization gathered at the historic Manatee County Courthouse Wednesday afternoon for a press conference. The organization aims to create equity in the county through faith-based community action.

The group collectively prayed for Wells to act and applauded Florida State Attorney Ed Brodsky for his work in “decriminalizing poverty” by creating a pre-arrest diversion program for non-violent misdemeanors—such as inability or failure to pay traffic fines.

“We are the hands and feet, together, to bring justice to Manatee County,” said Eric Reaves, president of S.T.R.E.AM and pastor of Gesthsemane Baptist Church in Bradenton. “There is an adult pre-arrest diversion program; instead of getting an arrest record that will brand you for the rest of your life, it will give you another chance. We want to pray … and encourage Sheriff Wells to implement this.”

Graczyk, who leads St. Mary’s Episcopal Church in Palmetto, applauded both state attorney Brodsky and Sarasota County Sheriff Kurt Hoffman on their creation and implementation of the Adult Pre-Arrest Diversion program. Since its implementation in Sarasota County, 70 individuals have avoided arrest by participating in the program.

Manatee County Sheriff’s Office spokesman Randy Warren spoke with the Herald-Tribune late Thursday afternoon regarding the department’s plan in regard to the call to action by S.T.R.E.A.M.  According to Warren, Wells has been working in the background on plan implementation he said.

“There is some language that is being looked at and revised in the plan,” Warren said. “We can’t really say an exact deadline… we have deputies that have to be properly trained, but he has been working on this plan.”

Warren said some of the leaders in the organization are currently aware of the sheriff’s efforts to move toward the implementation of the diversion program.

The program was made available to law enforcement agencies in Florida’s 12th Judicial Circuit (DeSoto, Manatee, and Sarasota counties) in early summer. The Sarasota County Sheriff’s Office adopted the diversion program on July 1.

“This program saves money by not keeping regular working people in jail unnecessarily,” said Graczyk. “Through this program, people will face real consequences for their mistakes but they do not get branded for life with a criminal record … They can pay for their mistakes and then move on with their life.”

Statistics from the Manatee County Clerk of the Court cited during the press conference show a disparity in the region among those arrested. According to the records, there were a total of 8,402 total misdemeanor arrests in 2019. Of those arrests, 3,545 were driver’s license-related offenses.

First-time non-violent offenses such as expired tags, suspended licenses or failure and inability to a fine, are among the offenses that “criminalize poverty” S.T.R.E.A.M contends.

“We want to be tough on crime but it is most important that we be smart on crime,” said Joreatha Capers, pastor of Rogers Community Methodist Church.

“These arrests make it hard for people to get jobs and housing for an extended period of time… non-white people are five times more likely to get arrested for these non-violent people. These are not dangerous people, these people might not have money to pay for a fine or a fee … it could happen to anyone.”