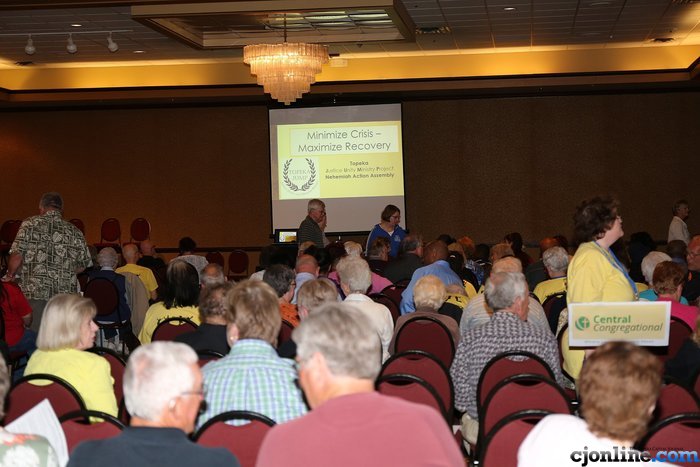 JUMP group to gather for ‘Night of Justice’

Several community issues — including mental health, affordable housing and transportation — will be addressed this coming week at a gathering sponsored by the Topeka Justice Unity Ministry Project at a downtown church.

The meeting will take place at 7 p.m. Tuesday, April 25, at Grace Episcopal Cathedral, 701 S.W. 8th. Organizers said as many as 1,000 people are expected to attend.

JUMP officials said the group has been researching community problems related to mental health, affordable housing, and transportation for the past three years. The group will bring forward its proposals that will include partnerships in all three areas.

The group will ask local leaders to:

– Establish an additional way that Valeo Behavioral Health Care and the Shawnee County Department of Corrections can partner together by providing supported employment to inmates upon their release.

– Develop a plan for transportation solutions for people without cars to get work at major employers in the industrial park south of Topeka.

Group leaders said JUMP’s mission is to seek “long-term solutions to poverty and injustice by drawing up proposals for policy and funding changes.”

The work of JUMP stands in contrast to the charity work that churches typically do, the group’s leaders said.

“If someone is paying more than half of their income for rent, a charity response would be to give them groceries to get by,” said the Rev. Roger Neufeld Smith, pastor of Southern Hills Mennonite Church and co-chairman of Topeka JUMP. “A justice response would be to address the systemic problem. The systemic problem in Topeka is that we do not have enough safe and affordable rental units for families that make $30,000 a year or less.”

JUMP leaders say more than 7,000 families in Topeka live in housing that is not up to code or live in a home where the rent is more than 30 percent of their income. JUMP officials said the organization already has made some progress in partnership with the city to address affordable housing, but more work remains to be done.