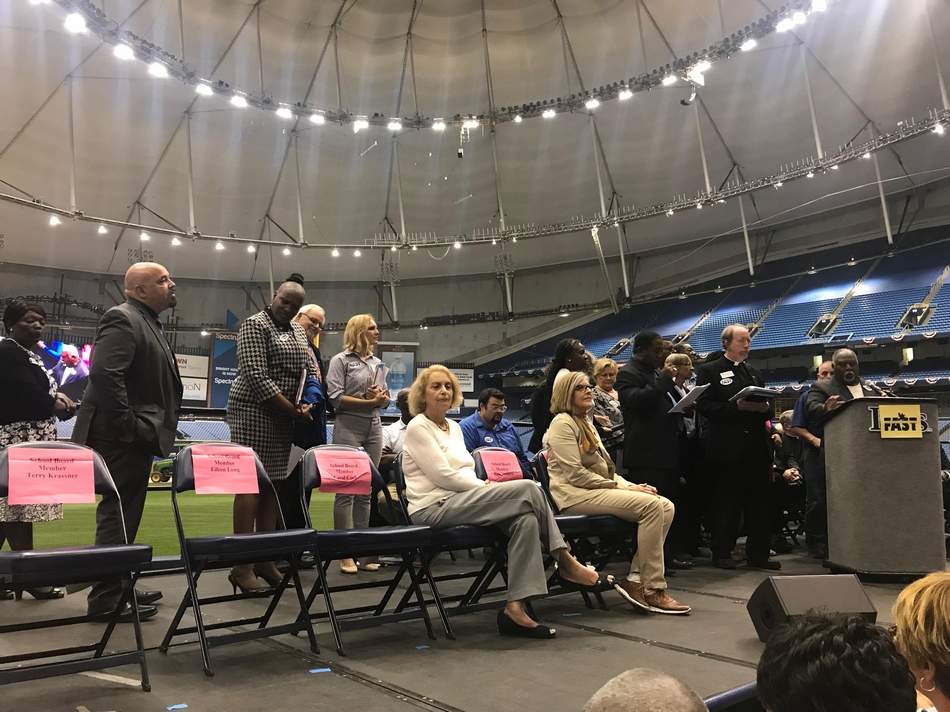 ST. PETERSBURG — A crowd of 3,000 peered down Monday evening on two Pinellas County School Board members faced with two questions regarding discipline and school data.

Lentino and Lerner were the only School Board members present Monday night for the Faith and Action Strength Together, known as FAST, Nehemiah Action Assembly at Tropicana Field. The annual event gathers congregations of different faiths to press local elected officials for commitments to solve issues such as affordable housing, civil citations for youthful offenders and fair discipline in schools.

FAST is pushing for the school district to adopt the “Safer Saner Schools Whole School Change” pilot program by the International Institute of Restorative Practices. Pinellas currently has a “train the trainer” approach in place from IIRP, although FAST officials said they were told by IIRP that the latter approach is more effective, and Pinellas’ current program is not a full implementation of restorative practices.

Pinellas Classroom Teachers Association president Mike Gandolfo said that in his 15 years working in the district, he’s seen programs with potential implemented in a less-than-effective manner.

“The professional educators are ready and willing to create positive change and collaborate with our district,” he said. “One way to do this is with restorative practice. But we will need the support and resources necessary from our state to make that happen.”

An IIRP spokeswoman told the Tampa Bay Times she asked for permission from the district to explain what their contract entailed regarding the implementation process of restorative justice.

Lentino kept insisting that the district was already committed to placing certified trainers in schools. But FAST officials said they wanted Lentino to commit to a different contract with the “Safer Saner” approach. She finally said yes.

Lerner was more reluctant. She gave an answer of “partly yes, partly no.”

“I go to schools, they are going beyond circles,” she said. “It’s being implemented right now. I want it implemented in the way we’re implementing it in all 123 schools. My understanding is it encompasses the program you’re talking about.”

After some back-and-forth, Lerner’s microphone was cut off. Her answer was recorded as a no.

Regarding the second question of quarterly reports, FAST said they would help families be informed about their child’s school.

Maria Scruggs, president of the St. Petersburg Branch of the NAACP, said she supported FAST’s call to release the reports.

Lentino called the question a “sticky widget” and said the district’s data team is working on it. She said the current system is not set up to provide that information on a monthly basis, but committed anyway.

“I have the whole complete faith in my heart … (that we) will be ongoing and will be consistent and we will change the diversity and experience our young children have carry into middle and high schools,” she said.

Lerner again gave a “no and yes” answer. She said “pages and pages” of comprehensive reports are already posted on the district’s website.

She added: “The district for many reasons is not able to do that now.”

Rev. Lois Rogers-Watson of East Lake United Methodist said it was “very gratifying” to have Lentino as an advocate on the School Board. She also called attention to the five absent School Board members.

“We are disappointed that we have this many empty chairs on the stage,” she said.

Also in attendance were five School Board candidates running in the August election: District 2 candidates Jeff Larsen and Emmanuel Swift, District 3 candidate Nicole Carr and District 7 candidates Nick Wright and Bilan Joseph. They did not answer any questions at the summit.