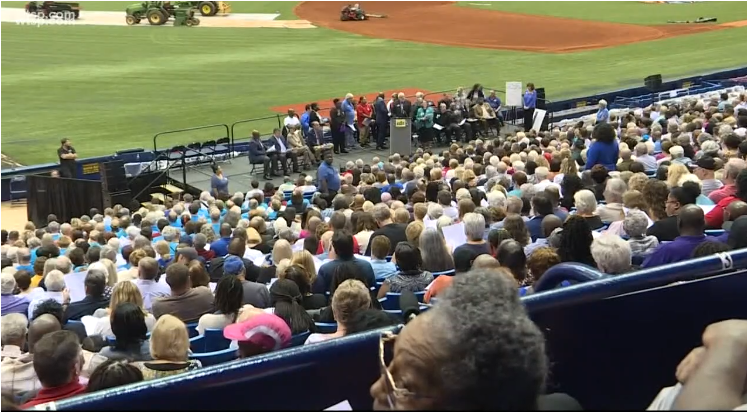 ST. PETERSBURG, Fla. — Thousands of people are planning to hold a rally because they’re upset about the lack of spending on affordable housing in St. Petersburg.

Around 3,000 people are expected to gather around 7 p.m. Monday at Tropicana Field.

The group, Faith and Action for Strength Together (F.A.S.T.), is upset Mayor Rick Kriseman doesn’t plan on spending $15 million for affordable housing until 2023, according to a news release from Ephiphany Summers. They hope to put pressure on Kriseman to begin spending on affordable housing using Penny for Pinellas funds as soon as next year. The group hopes city leaders find another way to pay for and make affordable housing a priority.

On Monday, the group also plans to call for an end to racial profiling. They’re asking for community support and say they plan to unveil a new way to document incidents and demand for more investigations into those incidents.

Pinellas County School Board members will be asked to start a pilot program to reduce suspensions, arrests and bullying in the public schools.

The group has invited local leaders and school board members to attend Monday night’s event.

F.A.S.T. is made up of 40 congregations in Pinellas County. The group claims to work together to address the root causes of poverty and injustice in the local community.