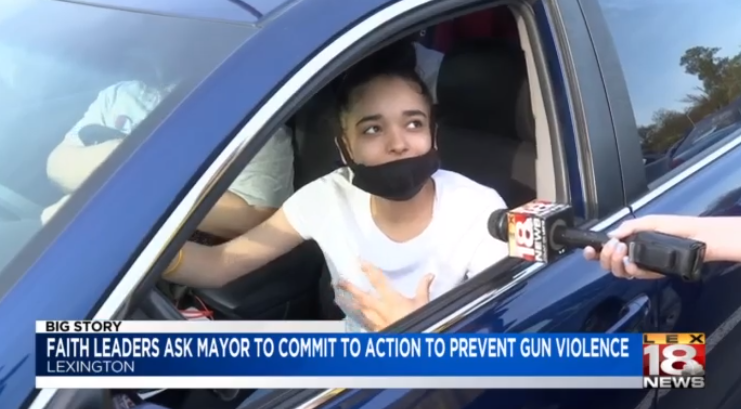 LEXINGTON, Ky. (LEX 18) — Lexington Faith Leaders called for commitments to change on gun violence, school suspensions, and affordable housing at an event held in the parking lot of Mary Queen of the Holy Rosary Church on Tuesday.

Hundreds of cars filed into the parking lot and listened to the event on their radios. Even more tuned in via Zoom, according to event organizers.

This was the annual Nehemiah Action event held by Building a United Interfaith Lexington through Direct-action or B.U.I.L.D. The group represents 26 congregations of different faiths in Lexington.

“We want people to not feel hopeless, that their voices are not being heard,” said Pastor Joseph Owens of Shiloh Baptist Church. “We want to be sure that they know that somebody is working diligently to do something to stop the violence in the community.”

Mayor Gorton said she could not make the commitment at the time because she needs to speak with community leaders about concerns with the program.

“We have called several cities that currently use GVI. Every one of them expressed concern to us, either because of their rising numbers in gun violence while they’re using GVI or because of the program singling out African American males,” Mayor Gorton said.

But it’s clear gun violence is on the minds of many, especially after five people have been shot and killed in Lexington this April.

“The violence really does need to stop because it’s getting closer and closer to the people that I love and care about,” said Triniti Snead, who attended the rally Tuesday.

B.U.I.L.D. members said they would continue to push leaders to prevent gun violence.

“People have had this experience of the pandemic and the inequalities in the city that it’s brought out and really don’t wanna go back to normal but want to really plan the future and have a say in it,” said Father Dan Noll, member of B.U.I.L.D.

Council Member James Brown, who spoke at the event, said he could not commit his support to that amount of money for the fund. But after a back and forth, he said he would commit to recommending $10 million in ARPA funding go toward the Affordable Housing Fund as long as it meets the federal guidelines for how and when the money can be spent.

They called on Superintendent Helm to commit to beginning a full-scale training program with the International Institute for Restorative Practices in six schools that is intended to decrease racial disparities in discipline.

Helm said the district would commit to contracting with the IIRP to reaffirm previous training and a pilot program in five schools, with a plan to expand the training to 15 schools after two years.